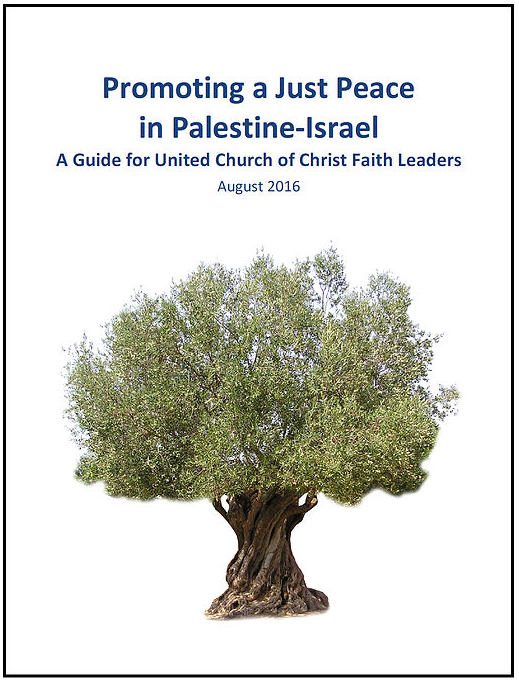 To help local churches and conferences of the United Church of Christ live into the General Synod call to end the Israeli occupation of Palestinian territories, the UCC Palestine-Israel Network has introduced a new resource guide that will help UCC church leaders and ecumenical partners implement the 2015 resolution.

"Life under the occupation is becoming increasingly oppressive for Palestinians and the danger of violence is growing daily," said former UCC general minister and president the Rev. John Thomas, a member of UCC PIN, a group that seeks to educate and motivate congregations on the issues within Palestine-Israel. "This resource provides tools for congregations and individuals who desire to use their economic leverage as consumers and investors to urge Israel to end the expansion of settlements and enter into good faith negotiations which is the only pathway to a just peace for Israelis and Palestinians alike."

The newly released 24-page guide offers resources to equip UCC lay and ordained faith leaders to study and carry out the resolution, which is aimed at ending Israeli’s nearly 50-year occupation of the West Bank, East Jerusalem and Gaza.

"Our goal has been to provide guidance to faith leaders, both clergy and laity, and to all settings of the UCC as we live our way into implementing the broad-based provisions of the resolution," said Diane Dulin, who convened the PIN working group that wrote the guide. "We hope more and more churches will consider aspects of the resolution, and engage in the study and activism which will allow the resolution to bear good fruit. We in the Palestine-Israel Network have offered to provide individual counsel and support as requested from those who pursue educational and advocacy efforts toward freedom and justice for all in Palestine-Israel."

The 30th UCC General Synod, which gathered in Cleveland in 2015, adopted the resolution "Toward a Just Peace in the Israeli-Palestinian Conflict" that called on the settings of the church to divest from companies that profit from the occupation of the West Bank. The UCC resolution, which does not call for a blanket divestment or boycott of the state of Israel, asks for divestment in companies which are complicit in and, or profiting from, human rights violations related to the occupation, and for a boycott of products produced in Israeli settlements located in the West Bank. Based on international law, those settlement compounds are considered illegal. The resolution also calls on the denomination to study the Kairos Palestine document, advocate for Congressional accountability of U.S. aid to the Israeli government, and for continuous interfaith dialogue.

'We in UCC PIN are eager to support our denomination in continuing the work we have long been about — providing a just peace effort which is supported by strong action in support of peace," Dulin said. "We are proud to continue this legacy, and grateful for our United Church of Christ leaders who have paved the way."

UCC PIN plans to offer a condensed version of the resource guide later this year.