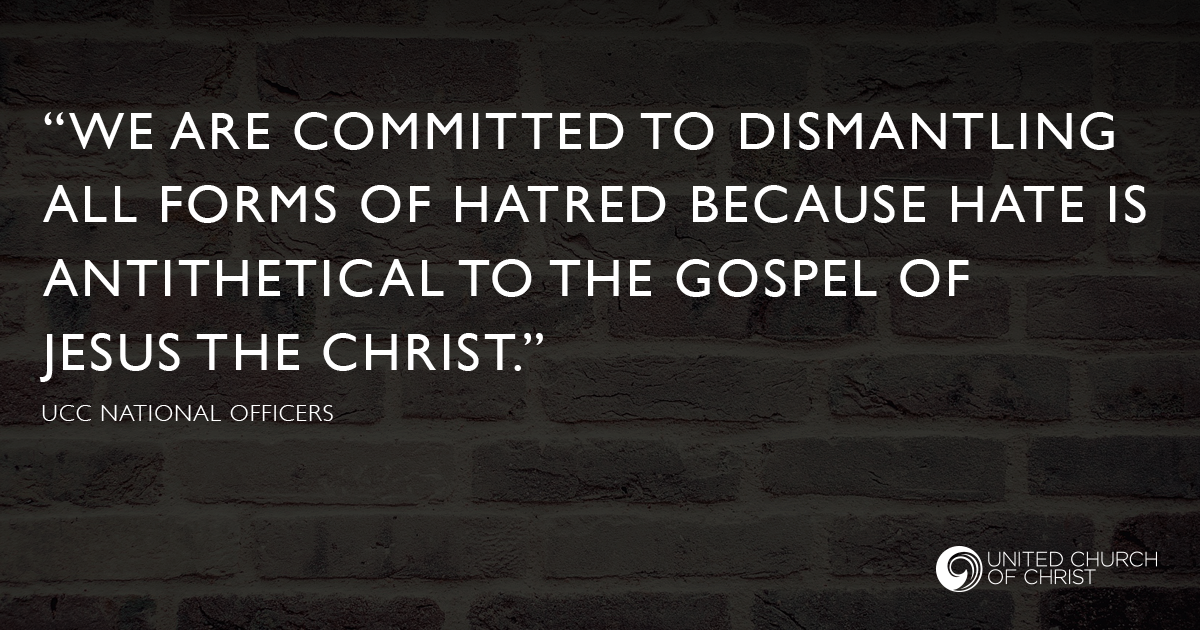 United Church of Christ national leaders and local pastors, outraged that racist posters inciting violence against LGBTQ students were allowed to remain displayed on the campus of Cleveland State University under the guise of free speech, have made their displeasure evident in a large display ad in the Sunday edition of the Cleveland Plain Dealer.

"It is appalling to believe the moral fiber of our society has eroded to such depths that anyone would even conceive of such graphics, much less post them in public space at a university," the ad reads. "Yet our country's rising acceptance of intolerance of difference in legislation, political rhetoric, and public protest creates a breeding ground for such acts of cowardice."

Their call to action is very clear. This type of reprehensible message, which was posted anonymously, depicted a lynching, and invited gay and trans students to die, is unacceptable and not to be tolerated.

"As clergy of the United Church of Christ, with national headquarters in downtown Cleveland, we are committed to the dismantling of all forms of hatred because hate is antithetical to the gospel of Jesus the Christ," the UCC ad reads.

The statement, signed by the UCC National Officers, the Rev. Michael Schuenemeyer, UCC Health and Wholeness Executive, the Rev. Rita M. Root, General Minister of the UCC Eastern Ohio & Western Reserve Associations, and Cleveland pastors, the Rev. Janet Ross of the Amistad Chapel UCC and the Rev. Kelly Burd, Pilgrim Congregational, calls out Cleveland State University President Ronald Berkman, who used the freedom of free speech, protected by the First Amendment, as reasoning for not immediately removing the hate-filled posters on Oct. 12.

"The First Amendment must not become the cloak under which hateful and harmful rhetoric seeks shelter from critique and confrontation. We must confront such clandestine agendas wherever they rear their ugly heads. President Berkman did not do this," the statement continues. "Leadership must not only acknowledge someone else's First Amendment protection, but also advocate for the right of every student to experience an educational environment that is void of fear. We are hopeful that President Berkman has indeed heard the outrage of both students and community and has indeed adjusted his focus to the fostering of an academic environment whose communal standard would be to always and immediately speak out against such hateful rhetoric."

The posters were removed from campus only because school policy was not followed before they were displayed. Late Friday, a full week after the incident, and following the placement of the UCC ad buy, the CSU administration pledged to "invest in ongoing Cultural Humility and Cultural Sensitivity education that addresses the intersectionality of race, class, sexual orientation, gender and religious issues."

UCC leaders stand by their statement. "It is important that we, the church, speak out not only about this particular incident but about an emerging national trend of white supremacists being allowed onto college campuses and public squares to invite violence under the cloak of the First Amendment. Such blatant disregard for the safety and health of students violates the very spirit of the amendment. Freedom of expression, freedom of religion, freedom of the press are, at their core, intended to promote freedom from fear. The United Church of Christ joins the growing chorus of voices demanding that intolerance of all expressions of hatred against individuals for living in the fullness of their being should become the policy of every institution."