The United Church of Christ is grieving the loss of one of its greatest champions. The Rev. John Deckenback, spiritual leader, tireless advocate for justice and peace, and long-time Conference Minister of the Central Atlantic Conference UCC died suddenly Tuesday evening, July 19. He was found unresponsive at his desk at the conference office and attempts to revive him were unsuccessful.

"John Deckenback was a hero to me," said the Rev. John Dorhauer, United Church of Christ general minister and president. "He was the first conference minister I got to know at a personal level. He took me under his wings and showed me what real presence, real passion, and real advocacy looked like. He met every challenge with the same force, the same intellectual rigor, the same tenacity. He laughed long and loud, and loved deeply. He was a champion of the poor, the marginalized, the disenfranchised. He was the foe of the oppressor, the empire, and any power that lorded itself over others. He let you know when he disagreed with you, and asked you do the same to him."

Deckenback, who served for 24 years as the conference minister of the Central Atlantic Conference (CAC), with 180 churches located in portions of New Jersey, Maryland, Delaware, Virginia, West Virginia and Washington D.C., was also a tireless advocate for justice: in Baltimore, in the United States, in Israel-Palestine, in Colombia and in South Africa.

"John has been conference minister in the CAC just a little longer than I have been senior minister at Plymouth Congregational UCC," said the Rev. Graylan Hagler. "John was a minister's minister, building deep bonds with us in the local church, and helping to make us feel connected to the conference and the national setting of the church. His work informed us all — from challenging racism at home, to lifting of the issues of Palestinians and the occupation, to remaining in solidarity and relationship with the people of South Africa. He just returned from South Africa and reported on the South African United Church embracing the BDS movement. John leaves a big hole in the UCC locally, regionally, nationally and internationally. He is already missed."

His colleague, Connecticut Conference Minister the Rev. Kent Siladi said that Deckenback was known far and wide for "his love and loyalty for the United Church of Christ — sometimes a critic but always deeply devoted to the church's core mission and values; someone with whom you could disagree and not have the disagreement impair the relationship; a man who loved his family deeply; a great sense of humor; a deep and abiding faith; a compelling speaker."

"While in Bogota for a Colombia delegation we attended a rally for peace in Colombia," Siladi said. "Our partners there invited one of us to speak and we agreed that it should be John. He offered words of greeting from the UCC that affirmed our solidarity with the Colombian people and their quest for peace. The ovation for his words still rings in my ears."

"John was a leader in this church, in his community, known in statehouses and respected by staff here on Capitol Hill," said the Rev. Mike Neuroth, advocate for international issues in the UCC Washington, D.C. office. "If there is still such a thing as a church statesman, John was it. We have lost part of what has made this church great." 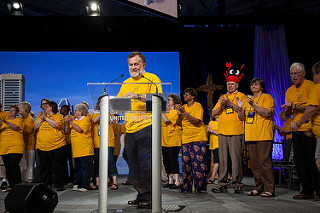 At the time of his death, Deckenback was immersed in General Synod 2017, which the Central Atlantic Conference will be hosting next summer.

"I'm having a hard time realizing John won't be with us for the 31st General Synod in Baltimore, an event he worked to achieve for so long and so hard," said Lee Foley, UCC General Synod administrator. "He looked at it as the capstone to his long ministry in the Central Atlantic Conference. He was key in presenting the city and the Conference to the Board of Directors as the 2017 site. He was key in building a tremendous volunteer force and the local financing to make the Baltimore Synod the great success it will be. He was my friend and great partner in the planning of next summer's Synod. His wisdom and advice will be missed dearly as we move forward, and when the Baltimore Synod is over everybody needs to remember it was John Deckenback who helped make it happen."

Deckenback, a native of Cresskill, N.J. where his grandfather was pastor of his childhood church, graduated from Whitworth College in Spokane, Wash., and earned Master of Divinity and Doctor of Ministry degrees from Pacific School of Religion in Berkeley. After seminary, he served as an associate minister of the Orinda Community United Church of Christ in Calif. Before his call to the CAC, Deckenback was on staff of the Northern California Nevada Conference UCC for 20 years. John is married to the Rev. Carolyn L. Roberts, pastor emerita of the United Church of Christ of Seneca Valley in Germantown, Md. They have two married sons, Jeffry and Aaron, a granddaughter and three grandsons.

A funeral service for Deckenback will be held at 11 a.m. Monday, July 25, at Evangelical Reformed UCC in Frederick, Md.

"The UCC, the wider church and the world has lost a friend and a champion for peace and justice," said the Rev. Barbara Kershner Daniel, pastor of Evangelical Reformed UCC. "I ask you to please hold Carolyn and the family — near and far — in your prayers. I know we will 'be the church' and stand by and with them in whatever way are needed now and in the months ahead."

Former UCC conference minister the Rev. Davida Foy Crabtree said while the wider church is mourning her long-time colleague and friend — "a fierce prophetic voice, a compassionate pastoral presence, and a powerful denominational leader deeply devoted to the UCC," for her the loss is personal. "Our friendship developed over the course of the last 25 years. He was a colleague who knew how to be a friend and sustain a friendship. When either of us would have particularly sticky situations in our ministries, we’d call the other and talk it through. When one of us (usually him) was driving long distance and needed to stay awake, we’d call the other and catch up for an hour or so. I will never forget the gleam in his eye and the grin on his face whenever he pulled a fast one on a colleague conference minister — some practical joke or comedic comment to lighten our hearts in the midst of the stress. For all his sometime bluster, John Deckenback was a gentle, compassionate, loving and tender man who exemplified us at our best. My heart is broken for Carolyn and their family, for CAC, for the whole UCC and for myself. I can’t believe he’s gone."

"John's legacy will live on throughout the United Church of Christ whenever prophetic protest leads to radical justice for all," said Rev. Ginny Brown Daniel, conference minister of the Missouri Mid-South Conference, who served with Deckenback for two years in the CAC conference. "May we hold our Central Atlantic Conference brothers and sisters in our loving prayers as they grieve the death of their conference minister and teacher. And, may we continue to honor John's life and ministry at our General Synod in Baltimore in loving celebration of John's spirit."

"I admired John. I loved John. He was a mentor, a colleague, and a friend," said Dorhauer. "He will be sorely missed, and this denomination will be telling stories of his accomplishments and contributions for generations."