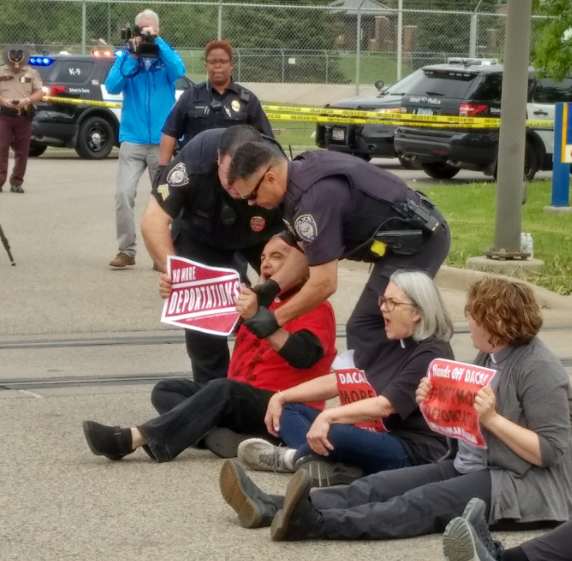 A United Church of Christ minister was one of eighteen people arrested on Tuesday at an immigration protest in Minnesota tied to the Poor People's Campaign. Daniel Romero, Minister for Faith Formation, First Congregational Church of Minneapolis, UCC, was in a crowd of more than 100 activists calling attention to racism in the immigration system near the Whipple Federal Building at Fort Snelling. In an effort to shut down deportations, Romero and several others shut down the streets and rail lines outside the Immigration and Customs Enforcement Offices (ICE) during morning rush hours, sitting in the way of traffic. They were removed by transit police.

"Eighteen people of faith and of no particular faith blocked the streets surrounding the train station and Whipple Building because ICE uses these roads to terrorize whole communities," Romero said. "We blocked the light rail station because this is how many ICE employees get to and from work and because under such dire circumstances there can be no business as usual. In the Christian tradition, this was our way of cleansing the temple, even if for just 90 minutes on one day."

First Congregational was one of several UCC churches represented at the May 22 interfaith demonstration. Members of Mayflower UCC and Lyndale UCC, along with the Robbinsdale UCC pastor were joined by advocates from Unity Unitarian Church in St. Paul, First Christian (Disciples of Christ), Jewish Community Action and Shir Tikvah Synagogue, in an effort to hold ICE accountable for what the group called "outrageous persecution of our Minnesota immigrants." 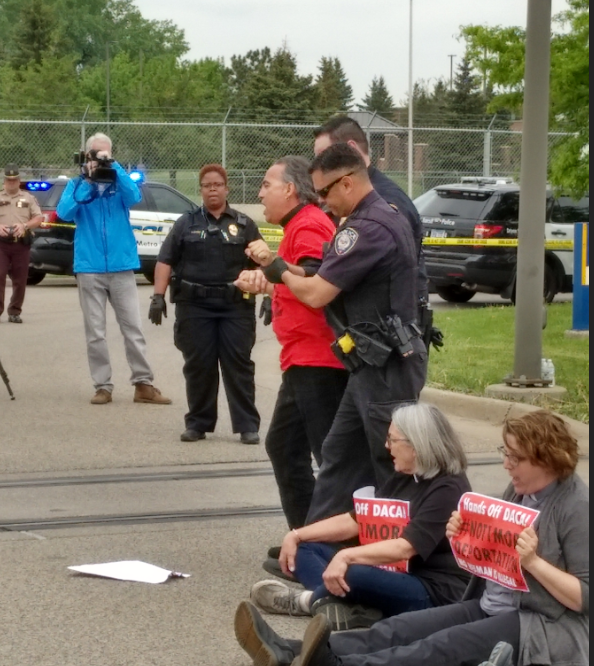 "ICE actions have definitely increased in our area as well as detention of people without any criminal records," said Diane Haines, chair of the Minnesota Conference Immigration Team and a member of Mayflower UCC. "The increase of people being detained and deported in our area as well as the horrific decision to not only to separate children from parents when they cross the border, but to now learn that this administration is asking that the children be warehoused on military bases, has increased the fervor of many in our churches and community."

"Pregnant women, children recovering from surgery in hospitals, veterans who have served in the US military, fully protected DACA recipients, and even U.S. citizens have been arrested and deported by ICE," Romero said. "ICE arrests people on private property without warrants, they torture immigrants with mental health issues by putting them in solitary confinement, and families pay unjust fees just to communicate with their loved ones in ICE jails. Many deported immigrants are effectively receiving a death sentence. Every day brings another heinous attack against our immigrant sisters and brothers and we must resist those attacks."

The Minnesota Poor People's Campaign (MPPC) is calling for abolishing ICE, an end to deportations, no expansion of immigrant jails in Minnesota, and making Minnesota a sanctuary state.

"We have over 50 congregations of many faiths who are a part of the sanctuary/sanctuary supporting congregations' network," Haines said. "We have coalitions of faith communities in various areas of Minnesota that work together on these." 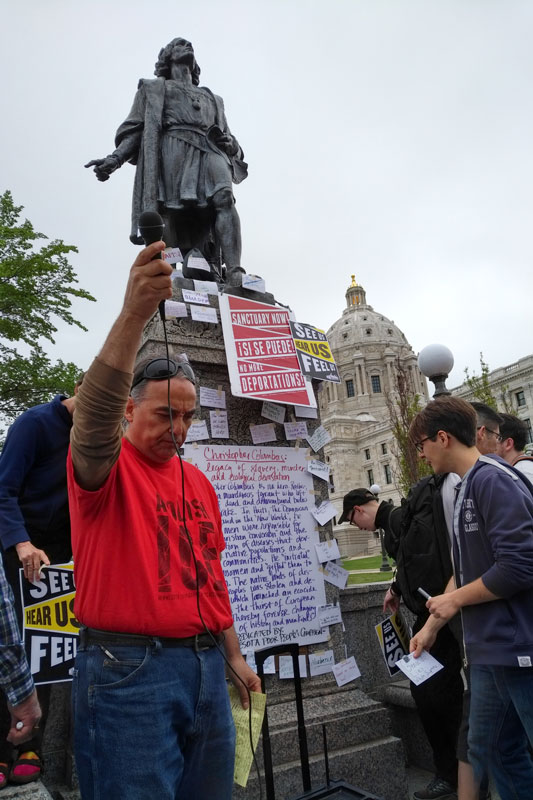 The MPPC action this week began the day before with a rally at the Capitol in St. Paul. Participants on Monday called for a just immigration system that strengthens the United States democracy through the broad participation of everyone in this country—which includes a timely citizenship process which guarantees the right to vote.

They shared the story of Armando, a Dreamer arrested by ICE in December. Struggling with mental health issues, held in solitary confinement, Armando has had no visits with his family since then.

"Several visits with his family have been scheduled but have been cancelled at the very last minute without notice to the family because of 'glitches' in the jail's scheduling system," Romero said. "Solitary confinement is tantamount to torture for anyone, and especially for those with mental health needs. This torture extends to Armando's brave sister and his mother who live daily not knowing how Armando is doing and they unable to express their support and love for him as letters that have been written to Armando are returned 'undeliverable.'"

Following the rally, Romero led the crowd in creating what they see as a more truthful inscription on the Christopher Columbus statue nearby.

"The state capitol grounds in St. Paul on which the Columbus statue sits, is located on the stolen land of the courageous Dakota people," Romero said. Labeling the explorer as a "murderous tyrant" who brought disease to indigenous people as he and his men stole their native lands, campaign participants hung a banner on the statue noting that the Columbus' true legacy was one of slavery, terrorism and ecological devastation. Their banner covered the plaque that reads he "brought the New World and the Old World together."

The Poor People's Campaign, 40 days of action which continues the 1968 initiative of the Rev. Dr. Martin Luther King Jr., is a nationwide call for reform, aimed at changing legislation that penalizes poor people. The movement calls for justice for the most vulnerable, an end to systematic racism, ecological devastation, and an economy built around war.