UCC leaders speak out in opposition to Dakota Access pipeline 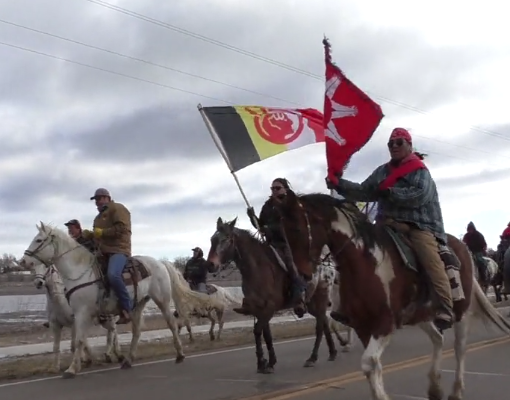 Future construction of a controversial crude oil pipeline in North Dakota is being challenged in court this week by Native American nations, advocates and environmental organizations, with the public support of the national officers and conference leaders of the United Church of Christ.

The Dakota Access pipeline, designed to carry a half-million barrels of oil daily from the Bakken oil field to Illinois for further distribution, is planned to run right along the Standing Rock Sioux Reservation (3,600 acres in North and South Dakota) and under the Missouri River. The UCC national officers, speaking out in a Witness for Justice column, declared opposition to the pipeline, which they believe threatens the water supply of the Native Americans, saying the issue is one "that touches upon vital matters of racial justice, the honoring of sacred space, and the climate impact of fossil fuels."

The $3.4 billion, 1,168-mile-long pipeline "travels through the Tribe's ancestral lands and passes within half a mile of its current reservation," the Standing Rock Tribe said in a statement released by Earthjustice, the nonprofit environmental law firm that filed a lawsuit to stop the pipeline on their behalf.

"The construction and operation of the pipeline, as authorized by the Corps, threatens the Tribe's environmental and economic well-being, and would damage and destroy sites of great historic, religious, and cultural significance to the tribe," the lawsuit states.

The Standing Rock Tribe is seeking to stop construction, filing an injunction against the U.S Army Corps of Engineers, which approved the pipeline in late July even though three other federal agencies — the Environmental Protection Agency (EPA), the U.S. Department of the Interior (DOI), and the Advisory Council on Historic Preservation — all recommended a full environmental review be conducted first. The lawsuit, which contends the pipeline violates the National Historic Preservation Act and Clean Water Act, among other laws, was filed in federal court in Washington, D.C., and will be heard Wednesday, Aug. 24.

Byron Buffalo, a licensed lay minister of the Dakota Association of the United Church of Christ, said a charter bus left tribal lands yesterday going to Washington for the hearing. His people see this issue as one that touches everyone living downstream of the pipeline, and will keep fighting, "because we want clean water, not just for us but for our future generations. That water (of the Missouri River) affects everyone all the way down to the Gulf of Mexico. This is what we stand up for."

Water is sacred to the Tribe, which relies on the river for drinking water, irrigation, fishing and recreation, and for cultural and religious practices.

"We are defending the water," said landowner LaDonna Allard. "You cannot take our water from us. It's a basic human right — we are just fighting to live. We have to stand to stand up for the world."

Advocates have been defending the water against the pipeline and its potential problems since construction began in April, gathering upstream from the Standing Rock reservation on Allard's land. Lakota and Dakota citizens and their allies are rallying at the sacred site, "Camp of the Sacred Stones," not far from where Allard's son is buried. Last week, the demonstrators' non-violent actions escalated, resulting in more than two dozen arrests and stopping construction at a spot where the pipeline would pass beneath the Missouri River.

"I have had a lot to say lately about the protest initiated by the Standing Rock Tribe in opposition to the Dakota Access pipeline," said the Rev. Gordon Rankin, conference minister of the South Dakota Conference UCC. "I am very concerned. I am concerned for my native sisters and brothers who seem to again be having a deaf ear turned to their concerns and agreements made to them broken. I am also concerned for the earth. I have been to Cannon Ball, to the river there, and in a few brief moments I knew why it is considered sacred. We can't keep treating the sacred as though it is expendable."

UCC officers are urging online advocacy in opposition to Dakota Access, to join Tribal leaders and advocates around the nation calling to stop construction of the pipeline.