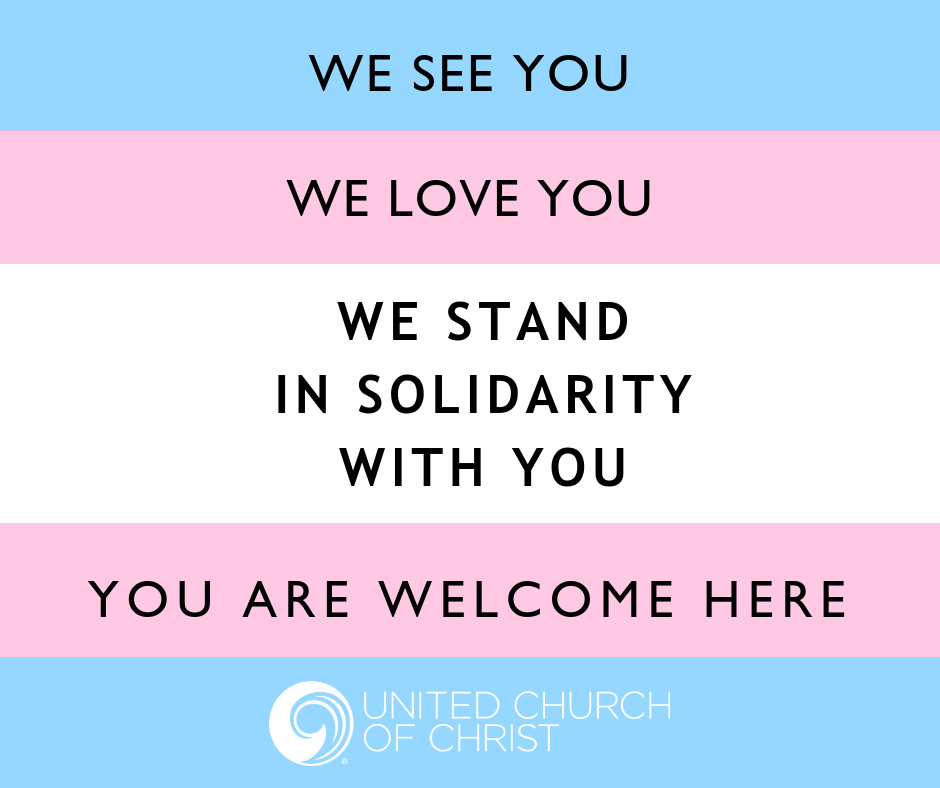 United Church of Christ leaders, angered and sickened by a discriminatory Supreme Court decision on Tuesday which will allow the Trump administration to begin enforcing a ban on transgender military service members as legal appeals continue, are speaking out and reaching out.

"To all members of the trans community —I am so very sorry for the trauma this inflicts," said the Rev. John C. Dorhauer, UCC general minister and president. "Please know that whenever religious voices tell you that you do not belong, cannot serve, and will not be tolerated — you will find a safe home and harbor in a United Church of Christ that still believes that no matter who you are or where you are on life's journey, you are welcome here. We seek to live out of vision to build a just world for all — and to continually resist those who try to strip you of your rights, your dignity, and your pursuit of happiness."

The Court, in a 5 to 4 decision, temporarily lifted injunctions that kept the transgender military ban from taking effect. The Department of Defense policy places restrictions on transgender persons enlisting and serving in the military. A policy called both cruel and immoral by UCC clergy and LGBTQ activists. A ban now challenged in the courts as discriminatory and unconstitutional.

"As the descendant of a people who were once banned from military service, I understand fully the implication of one's personhood being found unsuitable for service," said the Rev. Traci Blackmon, associate general minister of UCC Justice and Local Church Ministries. "Much of the same cloaked rhetoric used today against our trans siblings mirrors the language of the discrimination of the past: the effectiveness of our military will be compromised, such integration affects our readiness for combat."

"This injustice is much like the racial discrimination in the military that deemed African American service persons unfit to be officers, simply because of the color of their skin," said Bishop Yvette Flunder, who leads City of Refuge UCC, Oakland, Calif. "This fear of a comparatively small but dedicated group of service people is evidence of the ongoing dominance of fragile and uninformed patriarchy. It saddens me that this wound to a misunderstood, yet powerful group of people is opened up again."

In a tweet in 2017, President Donald Trump noted that he would no longer "accept or allow" transgender individuals to serve in the military, pushing the Pentagon to revise its policy and prompting a number of legal challenges. The Department of Defense policy bars service members who identify with a gender different from the one assigned at birth and who are seeking to transition. Until now, the ban has been on hold as it is debated in the courts.

"I am saddened and concerned," said the Rev. Stephen Boyd, minister for Chaplains and Ecclesiastical Endorser in the United Church of Christ. "Not only will this decision deny our military of many talented, and dedicated, men and women who are willing to sacrifice so much for the freedoms that they are now being denied, but it will instill deep uncertainty surrounding the futures of those transgender individuals already in the military. Over 900 men and women are now openly serving as a result of former President Obama's action to make the armed forces more inclusive. As a result of this action, they are now in risk of losing their jobs and careers. Many, who looked to military service as a fulfillment of their life's dream, have now lost that possibility. The Court's decision furthers the discriminatory policies of this administration and has no place our Army, Navy or Air Force." 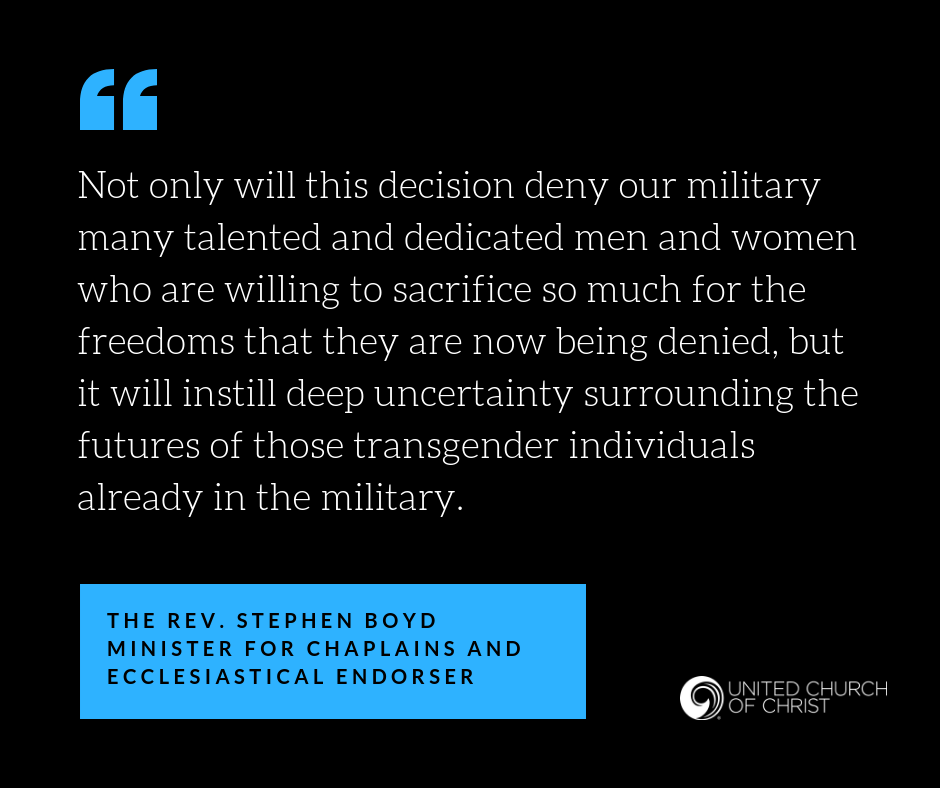 Advocates estimate more than 15,000 transgender Americans are currently serving in the U.S. military and that more than 134,000 are veterans. In a statement released after the Supreme Court action, the Pentagon sought to clarify that its policy does not ban all transgender persons from the military.

The Rev. Mike Schuenemeyer, UCC executive in the Office for Health and Wholeness Advocacy, said the policy is both harmful and dangerous. "Trans and non-binary service members have come out and served with honor and distinction, and by allowing the military ban to be implemented, their lives and futures are placed in jeopardy. It is dangerous because it sows confusion and uncertainty where clarity and unity are needed to provide for the safety and security our military provides to the nation and allies."

"While the decision is focused on the military, the message it sends impacts us all," Schuenemeyer continued. "That is why as faith communities that serve the Gospel of love and justice, it is vital to express and provide a clear voice and presence of solidarity and deepen the welcome we extend to persons of all gender identities and expressions."

"The hearts of all of us who walk, serve and pray beside our Transgender community, are deeply saddened by this decision," Flunder said. "We pledge to continue the fight against misinformation, mis-education, fear, injustice and prejudice. We will win, because God (Good) is on the side of justice!"

"How ironic it is that those who desire so desperately to protect our nation's freedoms meet such internal resistance to being freely themselves," Blackmon said. "May God bless America. All of America. No matter what our policies."