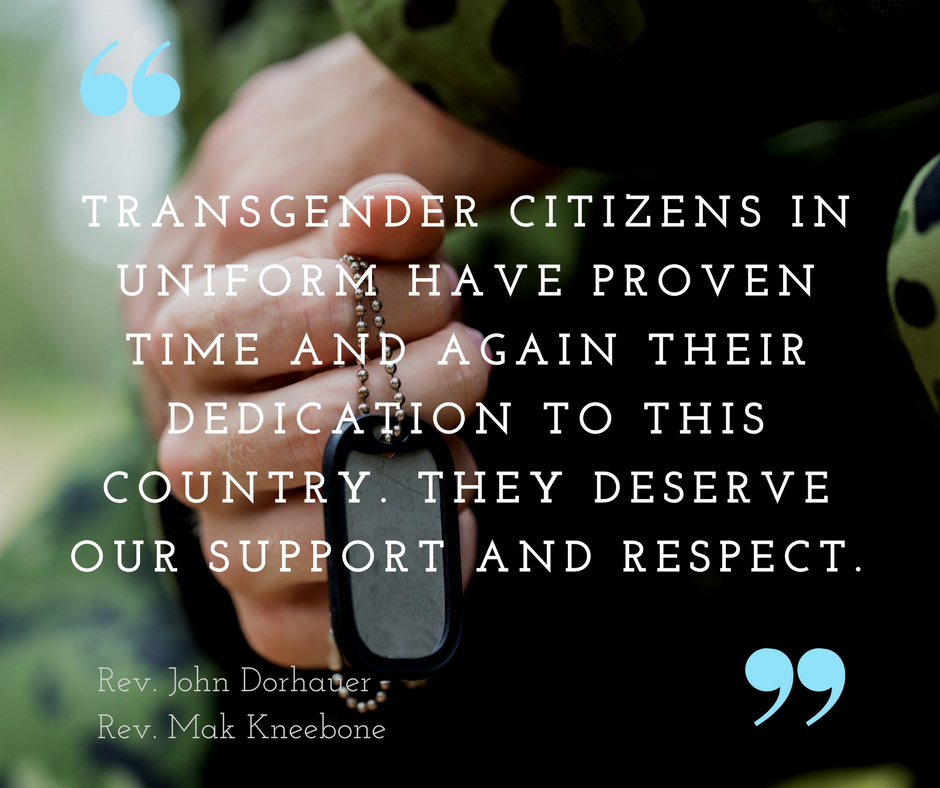 National leaders of the United Church of Christ and the UCC Open and Affirming Coalition are standing with transgender members, friends, neighbors and family across the country today, after President Donald Trump announced a total ban on service by transgender Americans in the United States Armed Forces. His Twitter announcement indicated transgender people are barred from serving in the U.S. military "in any capacity."

Neither Trump nor the White House clarified what would happen to the thousands of transgender service members already in the military. The announcement came less than 24 hours after the Texas Senate voted to restrict transgender people from using public restrooms that conform with their gender identity.

Acting on a 2003 General Synod resolution that affirms the participation of transgender persons in church and ministry, UCC officers and the ONA Coalition are urging the wider settings of the denomination to "stand publicly with our transgender members and neighbors in this urgent time, and whenever and wherever their dignity as human beings and their basic rights as citizens are threatened," they said in a statement. The Rev. John Dorhauer, general minister and president of the UCC, and the Rev. Mak Kneebone, president of the ONA Coalition, wrote the letter.

"Discrimination in any form violates our values as followers of Jesus Christ and as Americans who believe in liberty and justice for all," the statements reads. "Transgender citizens in uniform have proven time and again their dedication to this country. They deserve our support and respect."

Former Secretary of Defense Ash Carter, who lifted the ban, said that "to choose service members on other grounds than military qualifications is social policy and has no place in our military."

A 2016 study estimated there were between 1,300 and 6,600 active trans service members before the ban was lifted, with about 1,500 more on reserve. The Human Rights campaign, a prominent LGBT advocacy group, estimates there are more than 15,000 transgender troops in active military service.

UCC and ONA Coalition leaders concluded their remarks by saying, "Together, we strongly affirm the work of United Church of Christ chaplains in the armed forces, who are faithfully serving our transgender neighbors in uniform. Their ministry is needed now more than ever."

Read the full statement on the ONA Coalition website.