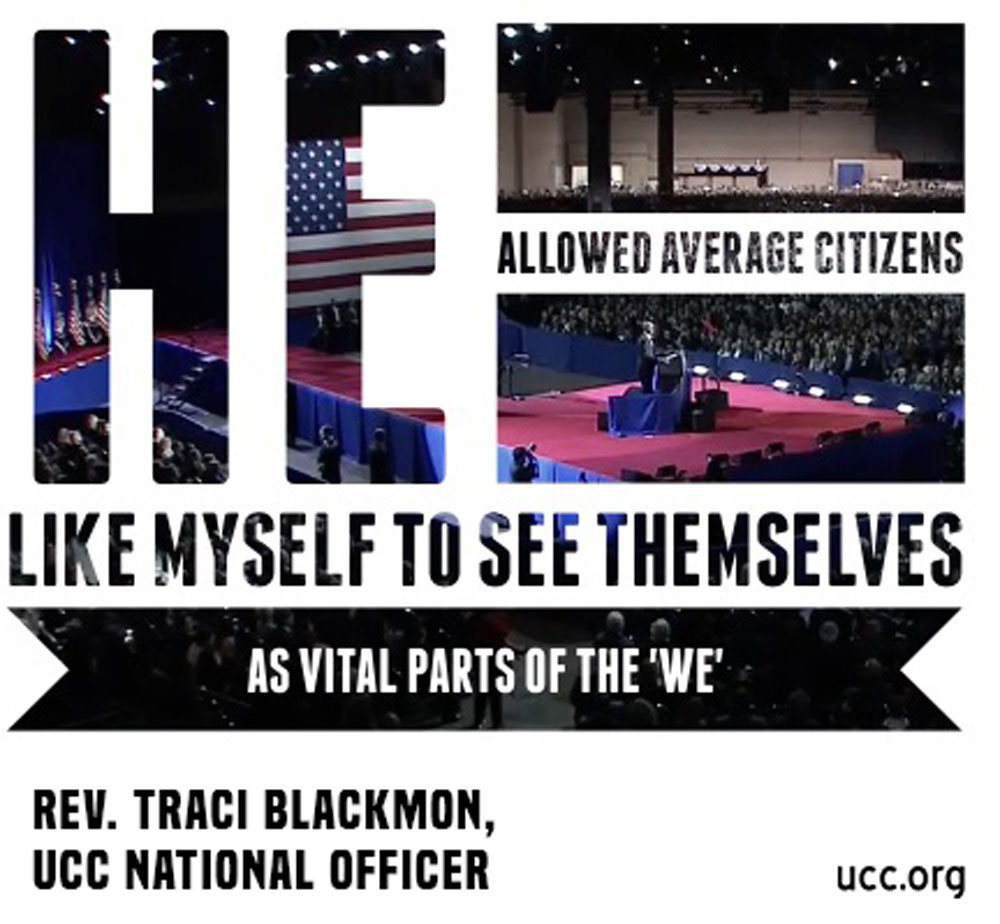 Hope and change brought Barack Obama to the White House in 2008, and eight years later, in an address on Jan. 10 that marked the end of his presidency, he delivered a sermon on democracy, urging all Americans to keep the faith in the power of ordinary people to bring about change. United Church of Christ leaders, invited to witness this remarkable moment in history, were honored, inspired and energized by his inclusive message, which was reflected in the makeup of the crowd.

"Receiving an invitation to last night's speech was a thrill. I did not expect it, although I should have. The United Church of Christ played a critical role in developing the spirit and world-vision of this remarkable world leader," said UCC General Minister and President the Rev. John Dorhauer. "His guidance under the powerful and prophetic vision and preaching of Jeremiah Wright while worshiping at Trinity UCC in Chicago, and the pathway of world changing, life-giving and courageous evangelism chosen by the United Church of Christ conspired to set our feet on a common path."

A common path to build a just world for all people. President Obama moved the audience of 20,000 people of all ages, identities and races in McCormick Place, in Chicago, the city where he got his political start and found his faith, with a message on unity, participation, and a vision of America where all are equal.

"It was in neighborhoods not far from here where I began working with church groups in the shadows of closed steel mills," Obama said. "It was on these streets where I witnessed the power of faith, and the quiet dignity of working people in the face of struggle and loss. This is where I learned that change only happens when ordinary people get involved, get engaged, and come together to demand it."

"I realized that perhaps President Obama's greatest contribution to our country was his willingness, whether intentional or not, to serve as both mirror and window to our democracy," said the Rev. Traci Blackmon, acting executive minister of UCC Justice and Witness Ministries. "His very elevation to the highest office of this land created a window into the depth of racism and elitism that still exist in this country, and the great lengths to which many are willing to plunge, morally and ethically, to preserve power in the hands of a few."

"Yet he also created a mirror to reflect the best of 'we' the people," Blackmon continued. "President Obama allowed average citizens, like myself, to see themselves as vital parts of the 'we.'"

Obama's call to action Tuesday night, to reject racism, embrace the immigrant, expand voting rights, uphold laws against discrimination and be the force of change in the world mirrors the mission and the extravagant welcome of the United Church of Christ.

"President Obama was quick to praise the contributions of women, of Muslims, and of people of color. He talked about the gains that were made in achieving marriage equality. He added our transgender community to his list of those from whom we have much to expect," said Dorhauer. "He warned of ongoing commitments to racial divides that threaten, reminding us that the brown children we castigate will soon outnumber us all. He spoke of the hope of maintaining an America that stood as a beacon of light to the immigrant and the refugee. He grieved for us all that the trope of Muslim terrorists too frequently and too easily displaced the more noble truth about our Muslim neighbors - that their love of God and their shared worship endow them with the same passion for love and justice as the worship of and love for our Christian Jesus does for us. Like the United Church of Christ, and in no small measure because of it, his was a world shaped by a vision of hope, promise, and togetherness."

UCC minister, the Rev. Chuck Currie, university chaplain and assistant professor of religious studies at Pacific University, was in attendance too.

"I was fortunate to play a small role in Obama for America back when Senator Obama was 30 points behind in the polls," Currie said. "Over the last eight years the White House has kindly allowed me the opportunity to weigh in on policy matters. Personally, joining President Obama with a small group of faith leaders in the Blue Room to celebrate the first open enrollment under Obamacare will forever be a highlight of my life. So many faith leaders worked so very hard to get Obamacare passed. Our work helped heal the sick. Now we have an obligation to protect the health of those 30 million Americans who gained coverage after the Affordable Care Act was passed."

In addition to safeguarding healthcare, the president also reminded Americans to guard against the weakening of values that make us who we are.

"He created a crowd that we dreamt of building over a quarter of a century ago when committing to become a Multi-racial, Multi-cultural church: a vision we have yet to fully realize but which I saw on display so clearly last night," said Dorhauer. "That is less me saying we have failed in our commitment than it is me saying don't stop dreaming - I saw such an audience take shape last night and a child of our own upbringing made it happen. We can do this, too."

Blackmon, who in the last year served as an advisor on the president’s Council on Faith-Based and Neighborhood Partnerships, a group of 15 individuals from across the faith community and charitable organizations that advised his administration on serving people in need, said she experienced a whirlwind of emotions as she listened to President Obama's final presidential address.

"I am grateful to have served, ever so minimally, under his leadership," said Blackmon. "I am grateful for his example of how to endure, how to rise, how to remain whole. He was not perfect. No President ever is. But President Barack H. Obama was a game changer, and his insistence on playing in a way that everyone can win, if we dare, reminds me that I can insist as well. And together, we can indeed be better than we will ever be otherwise. Yes, We can."