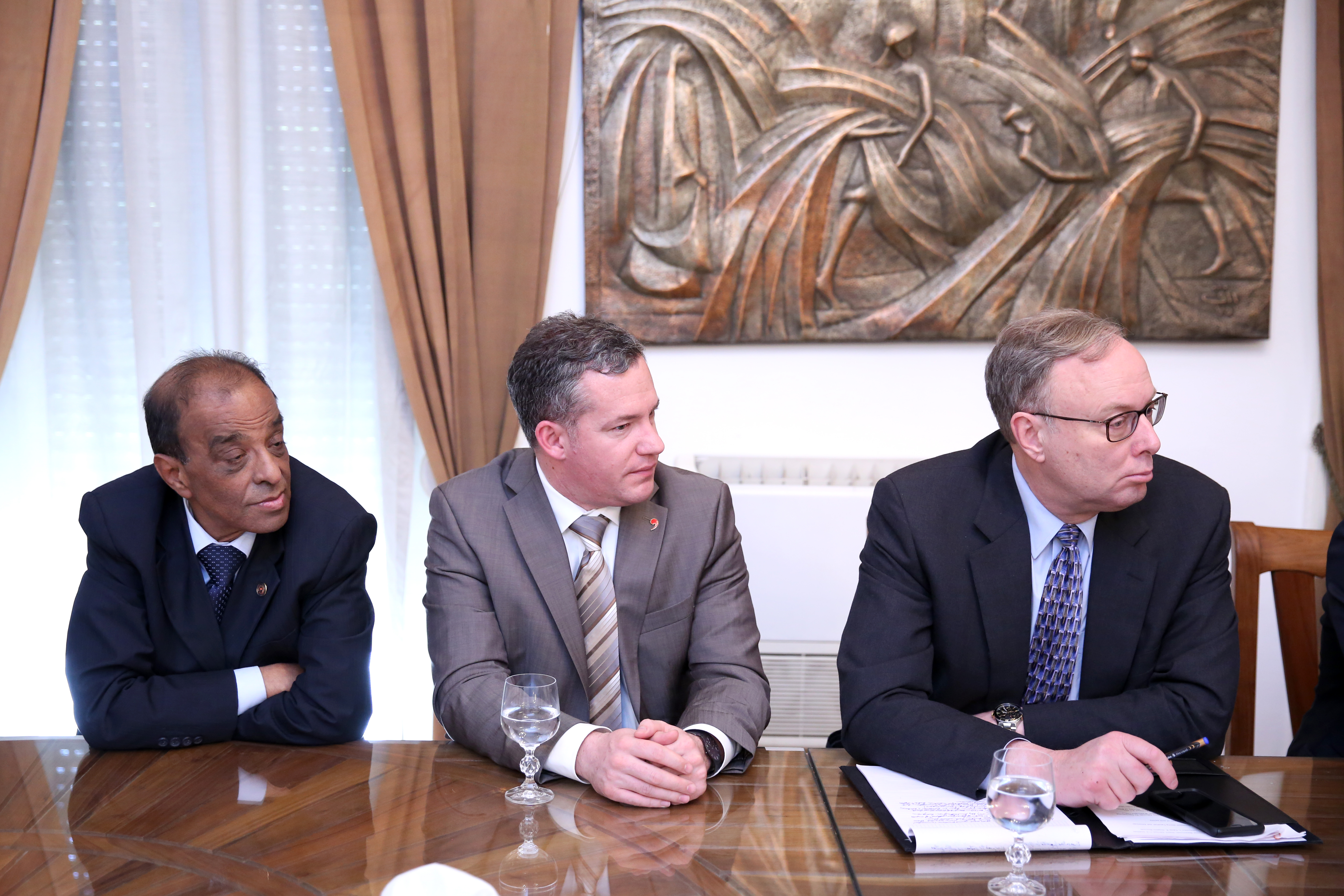 Leaders of the United Church of Christ recently concluded four days of diplomacy discussions in Cairo with representatives of government, communities of faith and the civil sector from both the United States and Egypt. The Rev. James Moos, executive minister of UCC Wider Church Ministries, and the Rev. Mike Neuroth, UCC international policy advocate, participated in the historic conversation that sought to bridge cultural gaps between the countries and to focus on democracy and stability in Egypt and the Middle East.

Among the emerging components that would help bridge the cultures of the U.S. and Egypt is the essence of interfaith dialogue. Moos and Neuroth signaled the group participants echoed that idea, as did some top scholars of Islamic thought that the group met with during the trip.

"We brought to the conversation a long history of positive engagement with our Egyptian partners, a shared commitment to peace and justice in Egypt and in the region, and a theological voice that is committed to interfaith dialogue and good relations with our Muslim brothers and sisters," said Moos, who is also co-executive of Global Ministries, the shared global witness of the UCC and Christian Church (Disciples of Christ).

Moos and Neuroth were joined by U.S. representatives from the National Council of Churches, the U.S. Embassy in Egypt, two staffers from the offices of two Congressmen, and two leaders from Hands Along the Nile, a Virginia-based group that promotes cross-cultural understanding between Americans and Egyptians. While in Egypt, they conversed with representatives from the Coptic Evangelical Organization for Social Services (CEOSS) — a partner of Global Ministries — members of the Egyptian parliament, journalists and academics.

Moos shared that Egyptians are optimistic that their path to democracy will lead their country to greater stability. "In many ways Egypt is a transitional state," Moos said. "The Egyptians we spoke with are concerned about stability, democracy and human rights. They’ve been through two revolutions in the past five years. But they point out that democracy needs to be implemented there in their own context, and that we can’t apply a strict Western understanding." 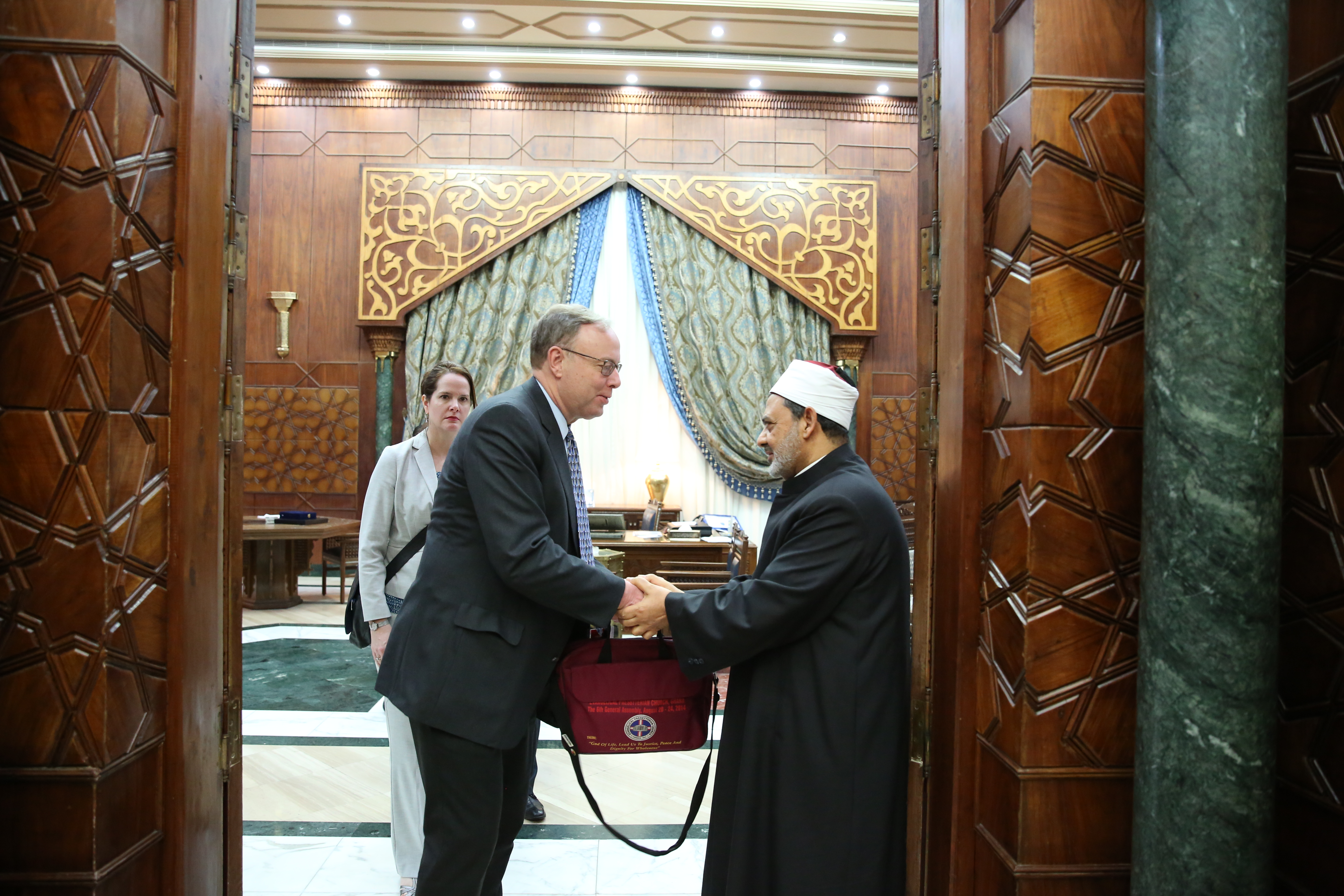 "We visited the Grand Mufti of Egypt, the highest authority for Islamic jurisprudence in Egypt, and we also visited the Grand Imam of Al-Azhar University," Moos said. "Al-Azhar, historically, has been the center of learning for the entire Sunni world, and the Office of the Grand Imam is seen as a chief interpreter of the Islamic faith. We spoke pretty openly about terrorism and ISIS, and one thing the Grand Mufti said is that ISIS is neither Islamic nor a state. The Grand Imam was highly critical of the militarization of the Middle East and the number of arms pouring into the region, including arms from the U.S., that contribute to the instability. And he said the aid money is better spent on addressing the needs of the marginalized and the poor — the real source of instability."

Neuroth said that participating in the delegation helped him gain a wider understanding of Global Ministries’ partners and Egypt’s role within the Middle East. "I was interested to hear from some of our dialogue partners their concern over the amount of military aid the U.S. sends to Egypt, instead of much needed support in areas such as education and food," he said. "Egypt receives the second largest amount of military aid from the U.S."

Moos asked the imam for a message to American churches, to which he replied, "Go back to the teachings of Jesus, especially the Sermon on the Mount, with a focus on peace, and care for the poor and marginalized."

This was the second time this dialogue has taken place, the first occurring a year ago in Washington, D.C. Moos added that there has been early discussion on inviting the Grand Imam to visit the U.S. next year, and that Global Ministries will help sponsor that trip.

The delegation also met with the Egyptian Minister of Culture. "We talked about freedom — not just political freedom, but also religious and cultural freedom," Moos said. "Like us, he believes that social justice is the key to freedom in the U.S., in Egypt and throughout the region."