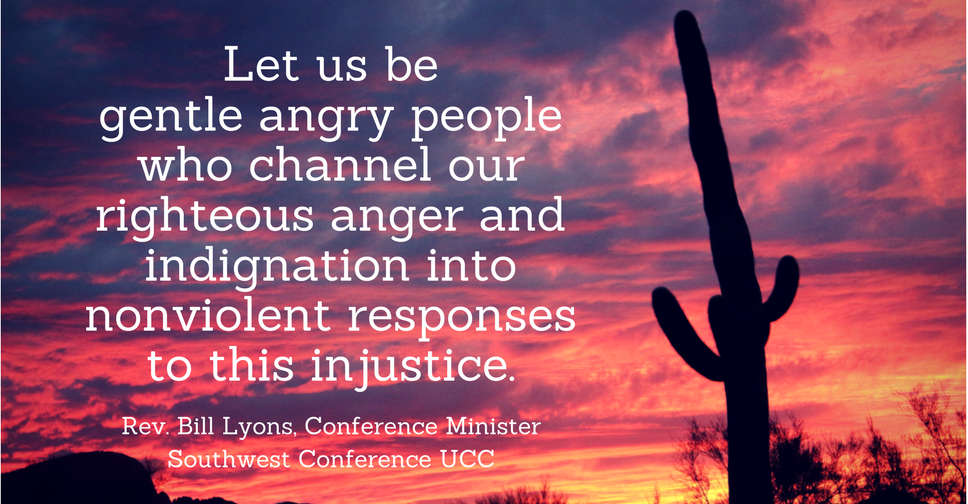 This statement from the Southwest Conference United of Christ is in response to President Donald Trump’s decision grant a full pardon to former Arizona Sheriff Joe Arpaio, who was recently found guilty of criminal contempt for defying a judge’s order to stop racial profiling of Latinos in immigration enforcement.

Having learned that the president has pardoned former sheriff Joe Arpaio, the Southwest Conference of the United Church of Christ stands in solidarity with our Latino neighbors, and we share their outrage. As a Christian and a person of faith, we denounce the president’s action as an affront to the worth and dignity of all human beings, particularly people of color and immigrants.

This abuse of presidential power signals to law enforcement officers and cronies of the president that they may defy court orders and violate constitutional and human rights, especially of people of color and immigrants, with impunity. This is neither the American democracy our founders envisioned, nor the ‘justice for all’ to which we pledge ourselves as citizens before our flag. Our country is a much more dangerous place tonight.

Precious little justice has been meted out on law enforcement officers who have shot and killed unarmed African Americans and Native Americans in our streets. Only Wednesday a car drove through a crowd of protesters marching in honor of Kiwi Herring, a transgender woman shot and killed by police in St. Louis. The grief and trauma of Charlottesville is still raw. This is not the time to leave unaccountable public officials who have used their power and positions to harm other persons based on their skin color or ethnicity. Sin has consequences even when forgiven.

With this decision Donald Trump has proven his inability to govern the whole of the American people with integrity and a moral conscience. The president seems to have pinned the label ‘white supremacist’ onto his legacy as a badge of honor.

By accepting the presidential pardon Joe Arpaio admits his guilt in every practical sense; one need not accept a pardon if one is innocent. This is the only consolation in the president’s miscarriage of justice.

The Southwest Conference shall continue to cry with the voice of the prophet, "Truth is lacking and whoever turns from evil is despoiled. The Lord saw it, and it displeased God that there was no justice." - Isaiah 59:15.

And still we call for nonviolence in the streets of Phoenix. Let us be gentle angry people who channel our righteous anger and indignation into nonviolent responses to this injustice. Now is the time to use our voting rights and the ballot box to change the balance of power in Washington.