A regional chapter of the Council on American-Islamic Relations has honored the United Church of Christ for “standing in solidarity with the Muslim community over the years and during the dark times of the Muslim Ban in America.” 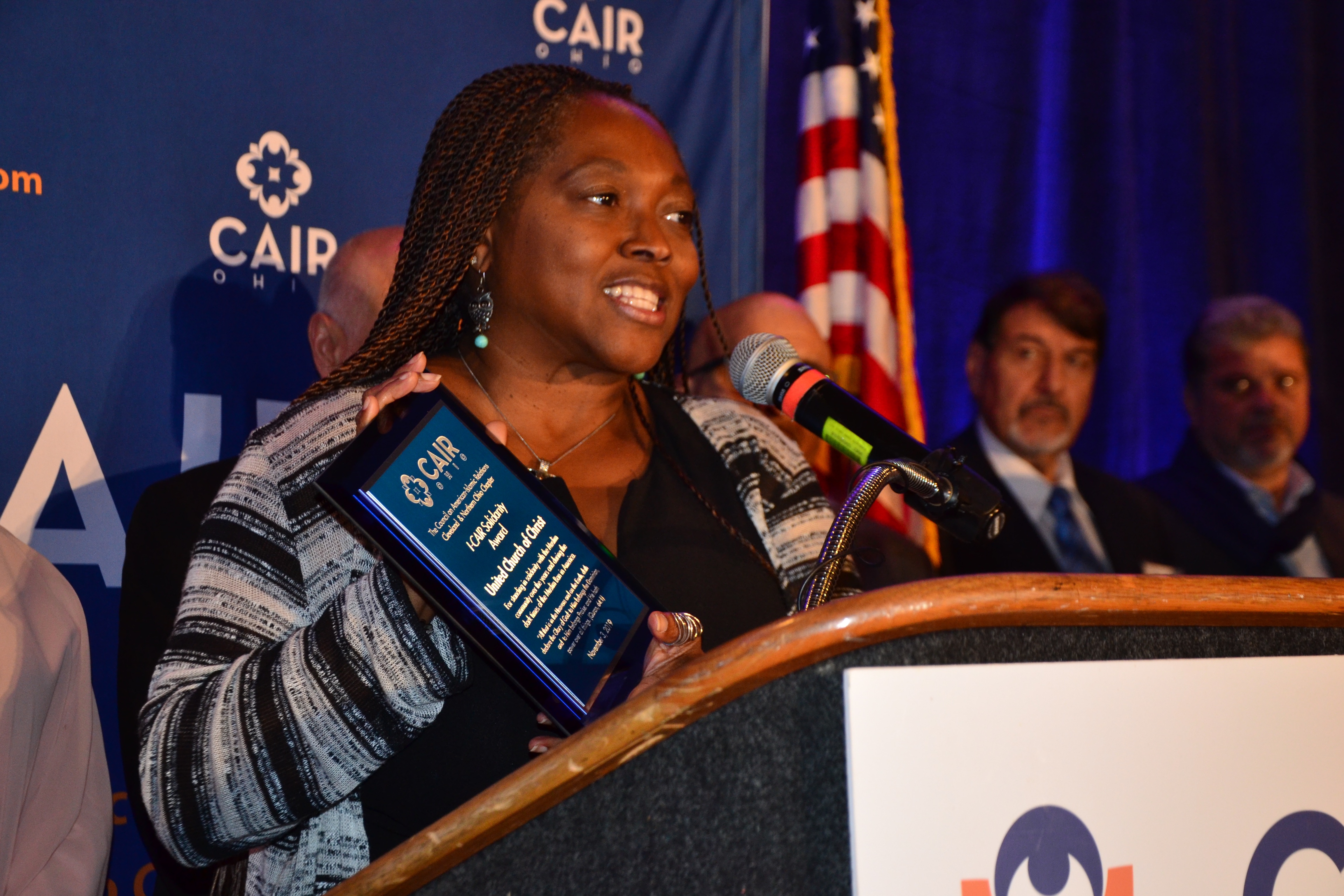 Those words are etched on a blue-and-silver "I-CAIR Solidarity Award" plaque, accepted on behalf of the UCC on Sunday, Nov. 3, by the Rev. Karen Georgia Thompson, associate general minister, at the annual Civil Rights Banquet of CAIR’s Cleveland and Northern Ohio Chapter in Independence, Ohio.

The Muslim community in America has felt a special interfaith kinship with the UCC ever since 1989, when the church's General Synod adopted a resolution, "The Relationship Between the United Church of Christ and the Muslim Community," said Julia Shearson, executive director of the Cleveland area CAIR chapter.

The 1989 UCC resolution reads, in part: "We ask for open hearts and minds as we as Christians learn about and support Muslims in their faithfulness in affirming the same God and our common prophets, as we discover in Islam a perspective on our beliefs and traditions and we rejoice in sharing with Muslims a hope in the principle of justice and righteousness and a belief in the peace of submission to God."

Shearson said she was influenced by phrases from the 1989 Synod resolution – "The God we worship is the God of all creation" was one of them – as she chose a verse from the Quran to incorporate into the UCC's plaque. That Quranic scripture (64:1) begins: "All that is in the Heavens and on the Earth, doth declare the Glory of God."

"We wanted to express our thanks for the many ways UCC has stood in solidarity with our community against anti-Muslim hatred, anti-sharia bills, bigotry, and most recently the Muslim Ban," Shearson said. She cited UCC leaders' August 2019 visit with CAIR to the offices of U.S. Sen. Rob Portman as just the latest of many examples of UCC support. Together, in a meeting with Portman's staff, they urged the senator to seek an end to the current ban on travel to the U.S. from seven Muslim-majority countries. The ban was initiated by President Donald Trump by a 2017 executive order and struck down by a court. A later version of it was upheld by the U.S. Supreme Court.

"Our love of neighbor centers the ministries of the UCC," Thompson said. "I am thankful for the witness of the UCC here in Cleveland, which is our local context. Working with CAIR Cleveland and inviting their presence with us as we address the issues of escalating racism, Islamophobia and xenophobia is important as our voices together strengthen our ability to impact these challenges. We are committed to continue this partnership that transcends the narratives of our day. We are committed to being faithful to our common calling to ensure that there is a just world for all."

"In a world where too many narratives circulate that ask us to fear our Muslim neighbor, we in the United Church of Christ are committed fully to love of neighbor – without qualification or restraint," said the Rev. John Dorhauer, general minister and president. "CAIR has been a long, strong ally with us. The work we do with them we do because we share a common vision and purpose – peace in the world, justice for all, and love for God's precious children. That we are now being honored by them with this award is a matter of deep pride for us. We do the work with them because of our shared commitment to building a better, more just world for all. To be named as a friend they want to honor with this award is testimony to the value we both place on the relationship and the impact of the work we do together. We know that the world is, and will remain, a better place when we choose love over hate, trust over fear, and relationship over rancor."

To see captions, hover your cursor over photos in this article. Photos by Jefferey Ivey, copyright 2019.