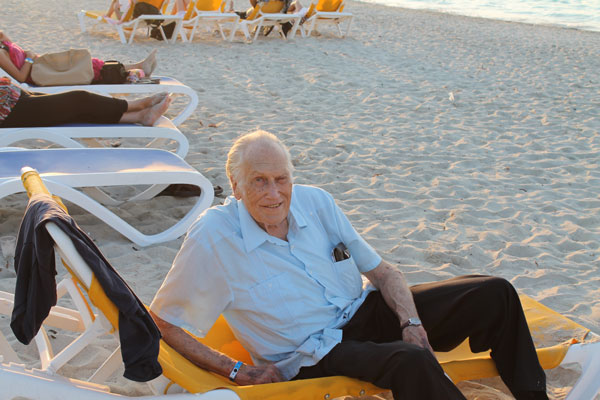 The Rev. Ted Braun lounging on Veradero Beach, east of Havana, in 2013

After more than a half century, the United States and Cuba are on the road to better relations. The stars and stripes now fly over the U.S. embassy in Cuba for the first time in 54 years. And while the communist island nation is expecting a wave of new American tourists, a UCC study seminar which has been bringing interested visitors to Cuba for 33 years is preparing for its next trip in January -- in memory of the late Rev. Ted Braun, who championed and led the experience since 1980.

"My father has always worked in solidarity with people who are disenfranchised from the general population," said Braun’s daughter, Rebecca Ralston. "In 1979, during his first visit, dad fell in love with Cuba. Over the next 33 years, he developed a very close affinity to the Cuban people, and came to understand their passion for their revolution, and their fight for independence from their northern neighbor."

Braun, then pastor of Church of the Good Shepherd UCC in Carbondale, Ill., first went to Cuba on a UCC tour organized at the invitation of the Ecumenical Council of Cuba, saw the country as an alternative way to organize society. He fell in love with the people and their passion for community. When he learned the trip was a one-time only thing, he started his own, which became a series of Cuban Study Seminars.

"The trips were open to everyone, not just UCC members, said daughter Deb Braun. "The trips were structured to give people an introduction to Cuba through personal visits and conversations. At first the tours were organized as educational trips. When our government banned those, the participants went as journalists. Over the years, our dad opened many eyes, ears and hearts of U.S. citizens, giving them an opportunity that most of us didn't have a chance to see."

"Ted Braun led this trip because he was in deep solidary with the revolution," said the Rev. Tom Warren, Braun’s pastor at Pleasant Hill Community Church UCC, in Pleasant Hill, Tenn., who traveled with Braun to Cuba and will be leading the 2016 trip with his wife, Kim Miller. "When you went on a trip with Ted, you tasted it. Ted was in love with the vision and the romance of the revolution. Each trip, participants got a historical perspective on it. You left with an excitement about that whole process." 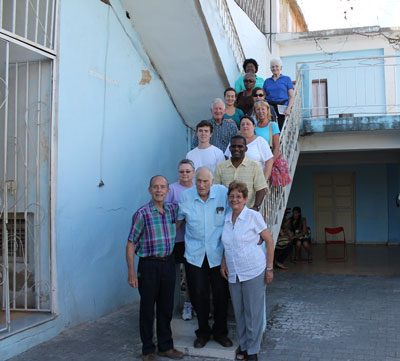 "The two times I visited Cuba myself, I sensed that the Cubans had figured out something that we in the U.S. often miss," said Deb. "They were living ‘The Beloved Community,’ where all were valued and cherished. Their society was showing preferential love and care to the marginalized and those at risk in the community. It was a different value system that oriented them. I think this is one of the things about Cuba that kept my dad coming back and working so hard to share the Cuban story as he came to know and love it, and the people. His hope would be that our peoples continue to learn from each other, be open to each other and love each other."

Care of marginalized people and those at risk is part of the socialist society that is Cuba. Visitors with the UCC Cuban Study Seminar can expect to see that first-hand, with plans to meet with people in churches and in homes, as well as stops that will serve as introductions to Cuba's health, education and welfare programs as well as cultural events, such as the National Chorus and the ballet.

Warren, who served as pastor for Ted and his late wife, Donna Braun, for 11 years, says our country can learn a lot from its island neighbor. "America, I believe, is crumbling because we have evolved in such a way that our society is now based solely on a ‘bottom line’ mentality and the mandates of the individual. We are no longer able to imagine our society differently. Cuba, with all of its imperfections and struggles, is organized differently."

Braun embraced that concept, and hoped more Americans could, too. 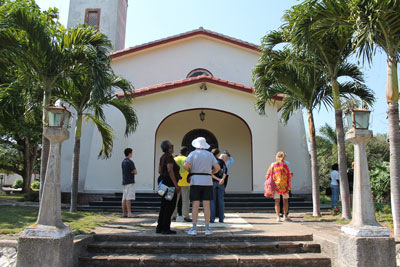 "The seminar helped break down the stereotypes and perceptions of Cuba as an evil communist country, said Rebecca. "For me, this happened when we visited the home of the head of the communist party, to find she had a picture of Jesus on her wall. That was dad's goal: to open people's eyes, and allow them to re-think Cuba based on their own experiences, and to open their hearts, to see a people who loved their country but were constantly having to fight for justice, and to be able to govern their own country without being threatened or boycotted by their superpower of a neighbor."

"My dad was very excited about the thawing relations between the two countries," said Deb. "I believe he always held out hope that the [U.S. Trade] Embargo would someday end, and that relations would be normalized. He was sad when his health prevented him from returning once some of the travel restrictions were lifted."

Braun, who died in February, didn’t get to see an end the U.S. Trade Embargo, but knew of the thaw between the two countries.

President Barack Obama announced in December that the United States was ending an "outdated approach" of isolating Cuba. In May, the U.S. dropped Cuba from its list of state sponsors of terrorism. The two countries formally restored diplomatic relations in July, and the Cuban flag went up at its embassy in Washington, D.C. On Aug. 14, the U.S. reopened its embassy in Cuba, which had closed 54 years before. However, the U.S. Trade Embargo remains, and a Republican-controlled Congress is unlikely to lift it before the 2016 election.

"I expect things to be different in Cuba, and I am somewhat anxious about it," said Warren. "There are REAL struggles in Cuba and needs for change, but there are also many blessings of their system and the isolation they have experienced, which has been both blessing and curse. I hope the embargo is lifted, as it has caused much suffering, but my sense is that Cuban socialism will stay in place, at least the good aspects of it (education, health care, strong communal spirit)."

"Religious life in Cuba is quite vibrant and the churches are very active. It’s just really fascinating," he added. "I worry that the beauty of the Cuban life will be lost. The people are excited that their country is opening up (to trade and tourists) but are worried about the changes their country is facing."