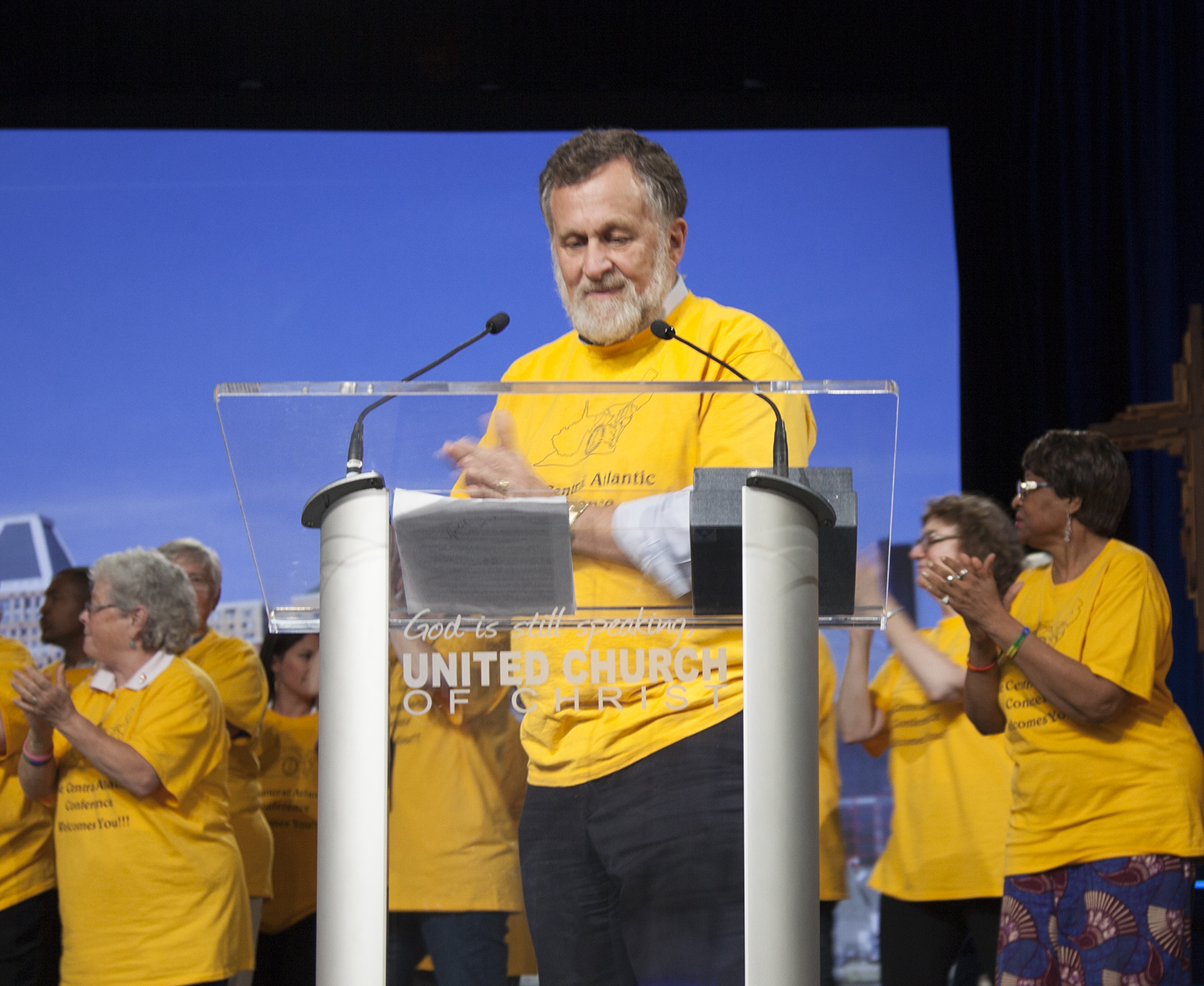 As the United Church of Christ assembles in Baltimore next week for General Synod 31, the denomination will honor one of its elder statesmen and the long-time spiritual leader of the Central Atlantic Conference who passed away before this denominational governance meeting that he long campaigned to host.

The Rev. John Deckenback, who died suddenly last July, will be remembered  Friday evening, June 30 at the Ecumenical and Interfaith dinner, sponsored by the Office of the General Minister and President and at a Crab Feast, named in his honor, scheduled for Monday afternoon, July 3.

During the dinner Friday evening, the Avery D. Post Ecumenical Award will be presented posthumously to Deckenback, who served as Conference Minister for the Central Atlantic Conference UCC (CAC) for 24 years.

"Every two years the Avery Post Ecumenical award is given to someone who has greatly impacted the ecumenical life of the United Church of Church through his/her efforts in building and maintaining ecumenical relationships," said the Rev. Karen Georgia A. Thompson, UCC minister for Ecumenical and Interfaith Relations."John Deckenback was an ecumenical leader in the Maryland and D.C. area that he served. Over the years, I learned that John was ecumenically engaged local and globally. In addition to knowing and working with a wide range of local denominational leaders, John was also globally engaged with our German and South African partners as well as others."

"At the time of his death John was the chairperson of the Ecumenical Leaders Group of Maryland," said the Rev. Alexander Vishio, associate minister for Social Justice & Witness, United Church of Christ Central Atlantic Conference. "And while I know this is an ecumenical award, I did some research on Avery Post, and I know he was also very committed to racial justice and peace. It's also fitting that John is getting this award, as under his leadership racial justice has been a priority of the witness in the Central Atlantic Conference. He was also committed to trying to bring about a Just Peace in Israel, another reason it's fitting that way."

"John was a persistent advocate for justice and peace, and reconciliation," said Peter Makari, UCC area executive for the Middle East and Europe. "He worked extensively on building relationships here in the U.S. and around the world, and worked hard to nurture those. He did not back away from hard conversations, but always remained true to his convictions. John championed Middle East issues, and we travelled together several times there. I know that he had ongoing conversations with interfaith colleagues on those issues, and despite different perspectives, he continued to engage those colleagues with great mutual respect."

Deckenback, a native of Cresskill, N.J. where his grandfather was pastor of his childhood church, graduated from Whitworth College in Spokane, Wash., and earned Master of Divinity and Doctor of Ministry degrees from Pacific School of Religion in Berkeley, CA. After seminary, he served as an associate minister of the Orinda Community United Church of Christ in Calif. Before his call to the CAC, Deckenback was on staff of the Northern California Nevada Conference UCC for 20 years. John's widow, the Rev.Carolyn L. Roberts, pastor emerita of the United Church of Christ of Seneca Valley in Germantown, Md. will accept the award on his behalf.

"John's entire ministry was deeply ecumenical. His ability to build relationships across the ecumenical world was unparalleled," said the Rev. Davida Foy Crabtree, a former conference minister and long-time colleague and friend."From his early days in California to his last international visits to South Africa and Colombia, his genuine interest in people, their faith, their churches and their challenges built strong, respect-filled connections. He gave his time and energy to local and regional ecumenical endeavors, advocating always for a focus on justice. I watched him change his schedule time and again to simply be present at an ecumenical justice event, working the crowd, building camaraderie, encouraging people to step forward, and stepping back himself to make room for others to lead. The UCC is proud of this trail-blazing ecumenical spirit!"

"There are several people in the UCC who I admire for their leadership and character in the world of ecumenism and interfaith relations, and one of those people is Rev. John Deckenback. I appreciate and thankful for his investment in my leadership prior to joining the Central Atlantic Conference staff in the fall of 2015," said the Rev. Marvin Silver, associate conference minister, United Church of Christ Central Atlantic Conference."One memorable experience was our trip to South Africa in July just before his death to visit with our partners, the South African Synod of the United Congregational Church of Southern Africa. Our visit was a life-transforming experience for me. The purpose of the trip was reignited a partnership that started years ago.John was passing the baton to me as I was being tasked with leading the Conference in renewing and building on this relationship."

"This year there were a number of individuals considered for this award," Thompson said."We landed on John for the above reasons. We wanted to celebrate his contributions to the UCC and particularly to ecumenical relations. 2017 is also the 500th anniversary of the Reformation and John was a strong supporter for UCC participation in commemoration of this anniversary and its meaning in the life of the Church. He is missed."