Almost 6,000 families on the South Side of Chicago have had their medical debt forgiven through a collaborative effort of local, Conference and national bodies of the United Church of Christ and other partners. UCC leaders announced Oct. 20 that church donations have wiped out $5.3 million in medical debt for 5,888 Chicago families. They invited participation in a similar national effort being planned for Giving Tuesday, Dec. 3.

Thanks to a campaign led by UCC Justice and Local Church Ministries and Chicago's Trinity UCC, qualifying residents in three Chicago neighborhoods are now receiving letters telling them that their medical debt, averaging $907, has been forgiven. The Rev. Traci Blackmon, UCC associate general minster for JLCM, and The Rev. Otis Moss III, Trinity's senior pastor, teamed up to initiate the project earlier this year and enlist other contributors inside and beyond the UCC. 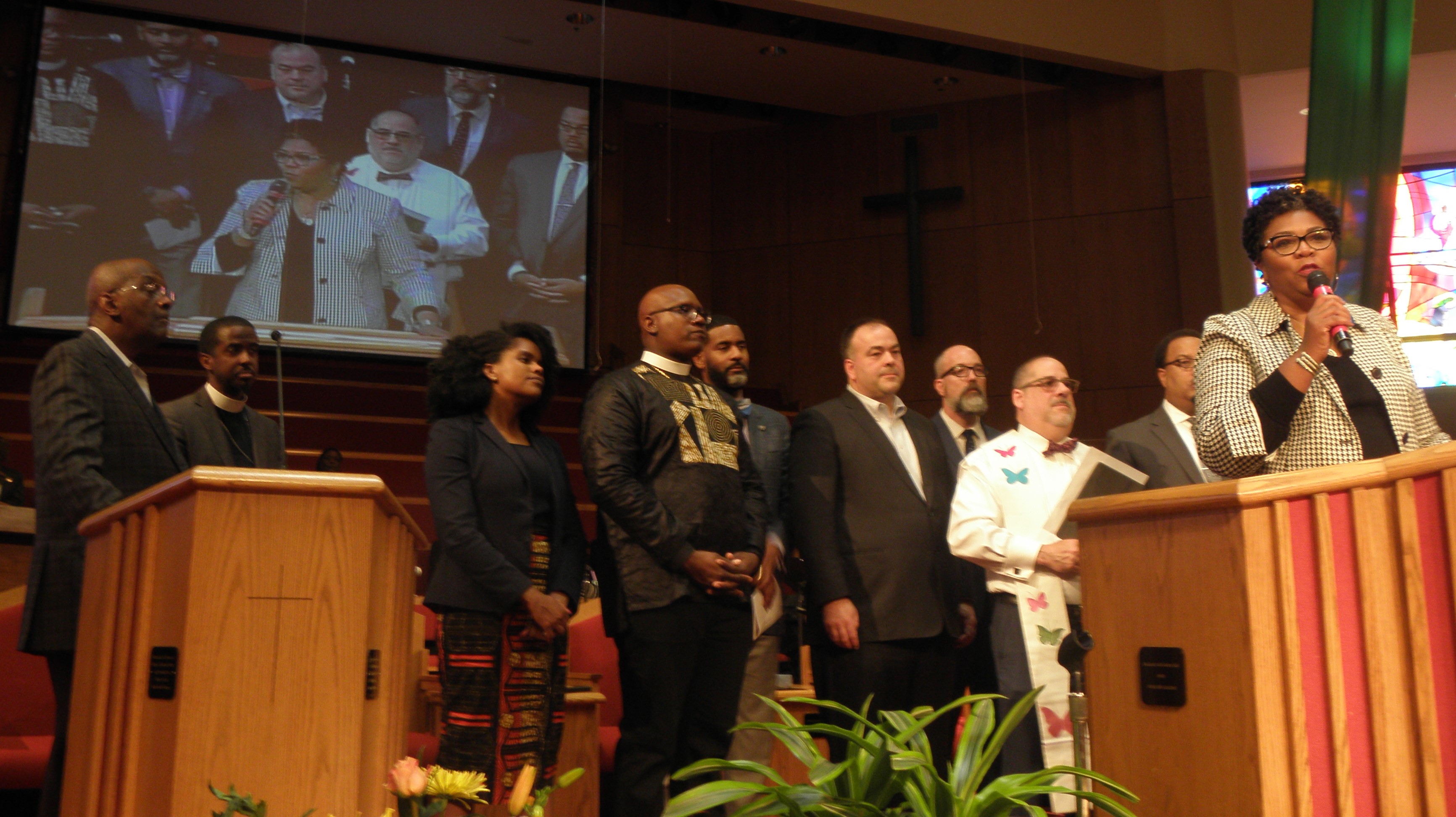 In a Sunday-afternoon news conference and celebration at Trinity, church leaders said the debt was purchased in September in three communities identified by ZIP codes: 60621, 60628 and 60636. The church bodies raised $38,000 over the summer and then worked with the New York-based nonprofit RIP Medical Debt to buy the debt at pennies on the dollar. In addition to lead gifts from Trinity and JLCM, generous contributions came from the UCC Illinois Conference, St. Pauls UCC in the Lincoln Park neighborhood of Chicago, Covenant UCC of South Holland, Ill., and The Leaders Network, a consortium of Baptist churches serving Chicago's west side neighborhoods.

"Today we thank all the supporters of this beautiful vision," Moss said. "Because of your generosity, thousands of families in Chicago will now be free to pursue dreams and celebrate this holiday season without the weight of medical debt."

The urban neighborhoods were chosen because of their demographics, said the Rev. Traci Blackmon, the UCC's national associate general minister for Justice and Local Church Ministries. Qualifying debtors were those earning less than two times the federal poverty level; in financial hardship, with out-of-pocket expenses that are 5% or more of their annual income; or facing insolvency, with debts greater than assets.

"When medical debt piles up, families have to make difficult financial decisions, sometimes cutting back on food, clothing or other basic household items," said the Rev. Justo González II, interim leader of the UCC Illinois Conference. 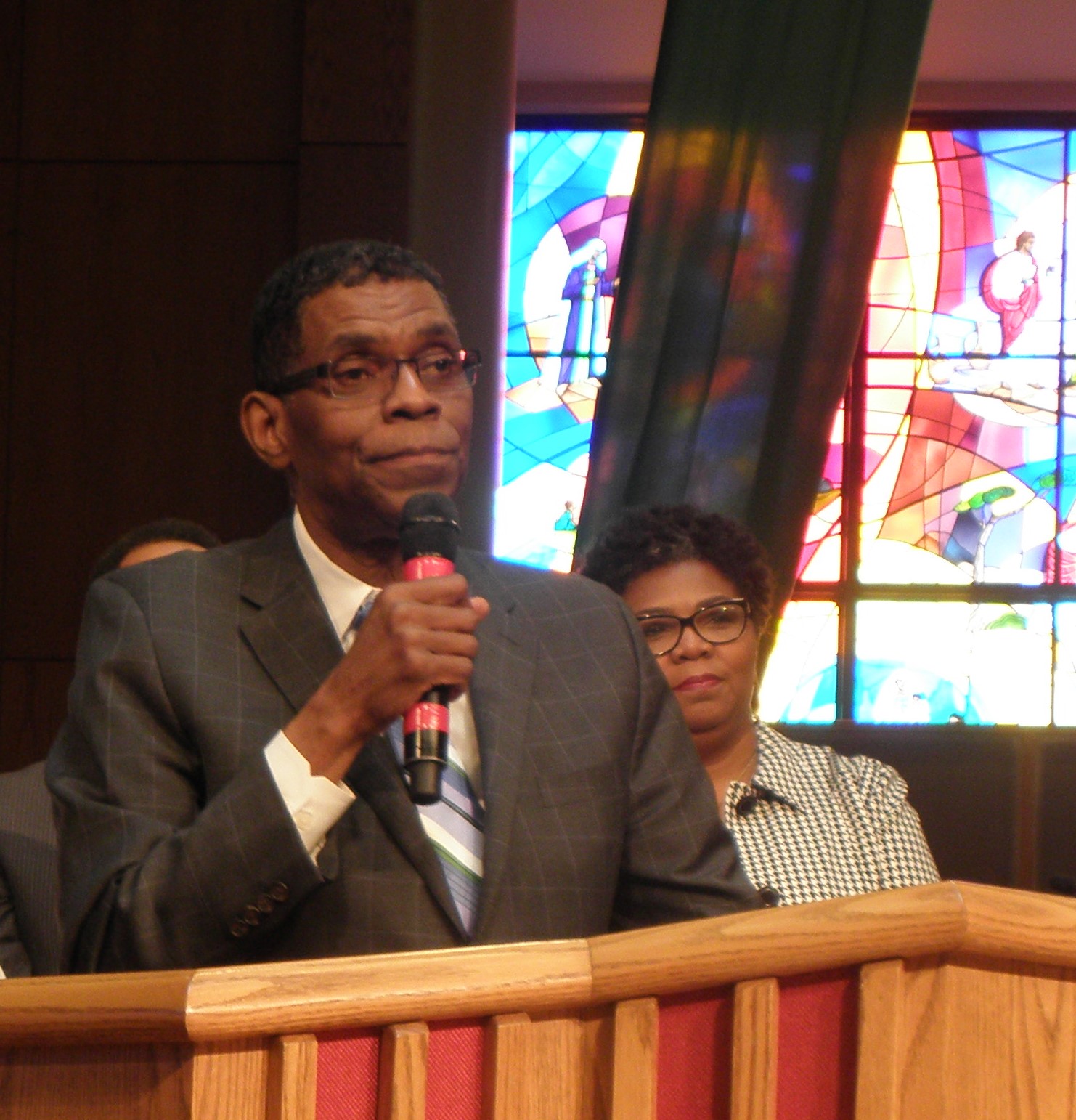 Moss invited to the podium a physician who belongs to Trinity, Chief Operating Officer Terry Mason of the Cook County (Ill.) Department of Public Health, which serves Chicago. He cited findings from a 2008 Commonwealth Fund survey, "Seeing Red: The Growing Burden of Medical Bills and Debt Faced by U.S. Families." Among millions of adults in the study, ages 19 to 64, 39 percent reported using up all their savings because of medical bills. "It is a shame that we live in a country where we are forced to decide between our physical health and our financial health," Mason said.

Cook County Assessor Frederick (Fritz) Kaegi also spoke of the impact of medical bills in the neighborhoods where people will soon be learning their medical debt has been abolished. "More than one-third of the homes in these communities are under water," Kaegi said. "Unexpected medical debt is one of the largest causes of bankruptcy in the United States. Because of this project, thousands of souls may get to stay in their homes."

"The talent, time and treasure of the church have touched a core need of people without means, or a way out of no way," said the Rev. Dr. Ozzie Smith Jr., senior pastor of Covenant UCC. "God be praised for faithful collaborative efforts!"

"Sometimes it seems there is very little grace in the world," said the Rev. Matt Fitzgerald, senior pastor of St. Pauls. "Or at least, we don't give each other much grace. What joy to open a letter saying, 'Your debt has been forgiven,' instead of a letter saying, 'We're coming after you. Pay up.' Saint Pauls is so happy to be part of this effort. I hope what is happening here inspires other churches to buy up medical debt. It's like Jesus feeding thousands of people from a few loaves of bread and two fish. We just watched $38,000 become more than $5 million."

"Our efforts in the Chicago area serve as a launching pad, in collaboration with the UCC's 38 conferences and almost 5,000 congregations, to medical debt relief efforts for those living at or below poverty in the 44 states we currently serve," Blackmon said. "We view this ministry as one that also embodies what it means to love God, love our neighbors, and proclaim Good News to the poor, whether they worship in our churches or not."

Updates on the national Giving Tuesday medical debt campaign, which will benefit similar recipients in locations to be determined, can be found at this web page.