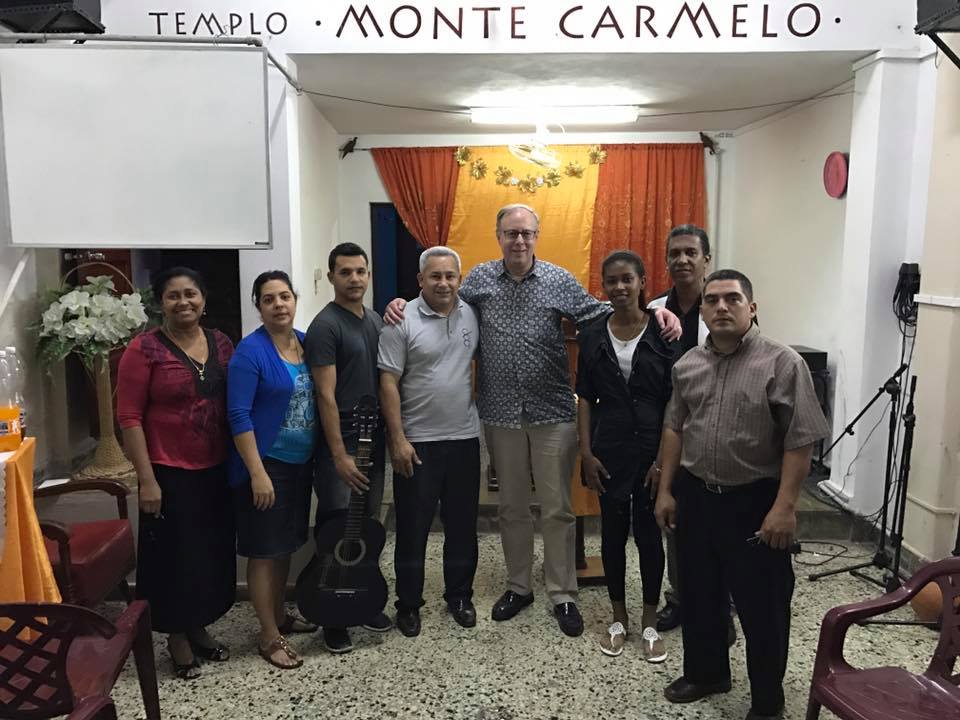 As the Presidential Inauguration Day draws near, the people of Cuba are very interested in how the incoming administration of Donald Trump will deal with the thawing diplomatic relationship between the United States and their country. It's a subject that was top of mind at almost every meeting that United Church of Christ Wider Church Ministries Executive the Rev. James Moos had during his six-day trip to the island nation ninety miles off the coast of Florida Jan. 9-14.

"I went to Cuba with ecumenical colleagues to engage in conversations with Cuban church and governmental leaders," Moos said. "U.S.-Cuban relations loom large in the current political debate; we are keeping the dialogue open, finding ways to work together."

Three issues the Cuba leaders are very interested in moving forward: getting the U.S. Congress to lift the 50-year old trade embargo, close the prison and naval base at Guantanamo Bay and deal with the issues surrounding immigration.

President Barack Obama, just days before leaving office, took a step toward normalizing relations around immigration, ending the special status given Cuban immigrants. On Jan. 12, his administration ended a policy opposed by the Cuban government which allowed Cuban nationals entering the U.S to stay and apply for a green card after a year of residency. Now, those immigrants will be subject to removal without a visa, the same as people from other countries. Under the just-ended policy, the number of Cubans entering the U.S. has spiked dramatically, more than doubling since Obama announced a renewal of ties with the island nation in late 2014, according to the Pew Research Center.

"Our Cuban partners hope that, with the repeal of the so-called "Wet Foot/Dry Foot" policy, it will become easier for them to obtain visas to enter the U.S.," Moos said.

As part of a Church World Service contingent, Moos met with several government leaders, including Cuban First Vice President Miguel Diez Carmel-Bermudez, the presumptive next president of the country, and Josefina Ferrerio of Cuba's Ministry of Foreign Affairs. Ferrerio, who is in charge of negotiations with the U.S, said America can’t point fingers at Cuba when it comes to human rights.

"When I asked about human rights in Cuba, she replied that Cuba is far from perfect, but the United States has no right to lecture the world on the subject given its own track record," Moos said. "She also observed that the U.S. has close alliances with countries that have far worse human rights records than Cuba."

The U.S. faith leaders, who spent all their time in Havana, also sat down with the Director of Religious Affairs for the Central Committee of the Communist Party, and Cardinal Ortega Alamino of the Catholic Church in Cuba, who echoes Pope Francis' concern for the poor and marginalized.

The UCC and Global Ministries have a number of long-time partners in Cuba. The Cuban Council of Churches, the Christian Pentecostal Church in Cuba, the Martin Luther King Center, and Matanzas Seminary are very familiar with the people of the United Church of Christ, their interest in social justice, and their advocacy work in the faith community.

In 2017 and 2018, the UCC is hoping the wider church will spend more time learning about Cuba and the six other countries in the Caribbean, with the launch of the Global Ministries Caribbean Initiative at General Synod in Baltimore in June.

"During the 18 months of the Global Ministries Caribbean Initiative we will engage our partners through people-to-people pilgrimages, special projects, justice advocacy, educational opportunities and worship materials," Moos said. "This will deepen our long-standing relationship with our partners throughout the Caribbean basin, including those in Cuba."