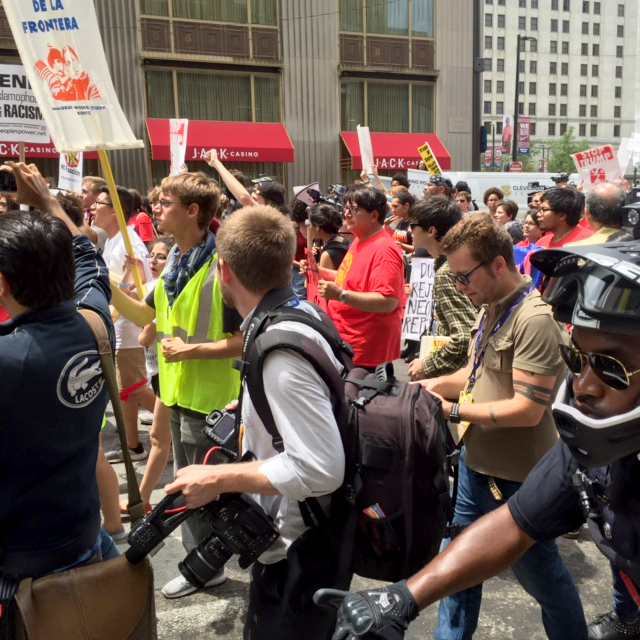 During the Republican National Convention this week in downtown Cleveland, the United Church of Christ is making its mission of inclusivity for all people evident — on the streets in front of the Church House and with wide open doors.

"This is who we are and we have chosen to highlight who we are, rather than focus on the rhetoric of the week," said the Rev. Traci Blackmon, acting executive minister of Justice and Witness Ministries. "There is no greater message to send to our nation than ‘We are all one.'"

In the first two days of the convention, national officers, team leaders and members of the denomination have demonstrated the church’s commitment to social justice in the city’s streets and its hospitality and extravagant welcome in the Church House. The UCC national offices, located just blocks away from the convention site and within the security perimeter, are closed, but Amistad Chapel UCC — the street-level chapel inside the Church House — remains open all week to offer a space for anyone to rest, rejuvenate and pray. 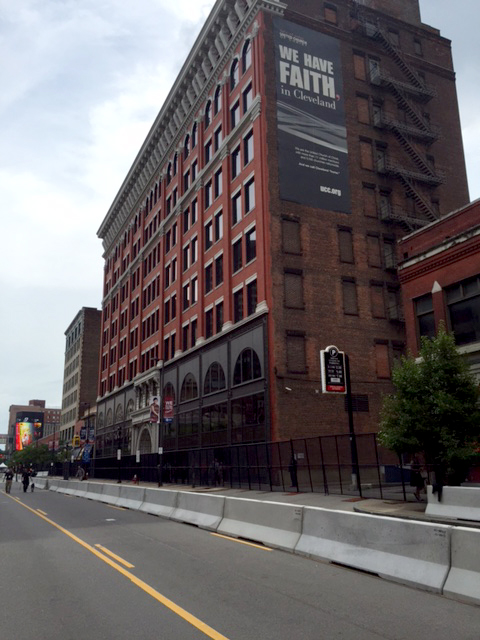 UCC justice advocates kicked off convention week by participating in two separate marches — one for economic justice and another for immigration justice — of about 500 people in the streets of downtown Cleveland.

Sandy Sorensen, director of the UCC office in Washington D.C., is in Cleveland for the week and attended both rallies, describing the atmosphere as positive and upbeat. "People were really trying to lift up the message of faith, hope and new possibility — something beyond the partisan gridlock we’ve seen in Washington," she said. "I think people are yearning for us to take steps forward as a country, for us to address things like immigration reform, to address things like a living wage and healthcare for all people, and a society without violence that is inclusive where all people are treated with respect."

Among the key issues the two rallies sought to raise: equal pay for women, universal healthcare, access to clean water, quality education, ending mass incarceration of people of color and the poor, legislation for immigrants that provides a pathway to citizenship, and stopping the deportations of undocumented immigrants and refugees.

"In this very wealthy country, there is no reason for anyone to live in poverty," said Edie Rasell, UCC minister for economic justice. "I hope the RNC — and the DNC next week — heard the call to 'end poverty now.'"

According to authorities, there were no major clashes in the city on Monday, despite a heightened police presence and protestors weaving from block to block during the first day of the RNC. 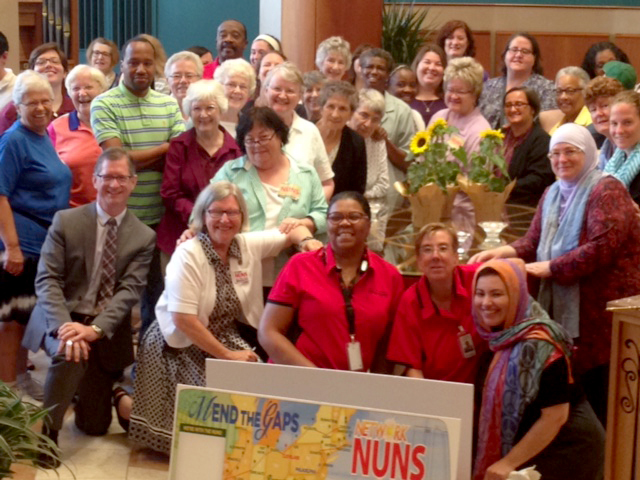 On Tuesday morning, the Church House welcomed an interfaith group to worship in the Amistad Chapel. The Nuns on the Bus, a project of NETWORK (A Catholic social justice lobby), have been on a national tour to raise visibility around poverty and a moral federal budget. This summer, the tour is traveling 2,400 miles across 13 states in response to divisiveness of the election cycle — including visits at the sites of both the RNC and the Democratic National Convention next week.

Fourteen nuns were on the bus that stopped at the Church House. Tuesday’s gathering brought in about 50 people to the Amistad Chapel, including local nuns, a group of Muslim women and the president of the local Amalgamated Transit Union, for a prayer breakfast and worship service that highlighted a vision of faith that seeks to bridge political divisions.

Sister Simone Campbell, executive director of NETWORK, told those gathered that "policies are made and policies are changed when we come together." 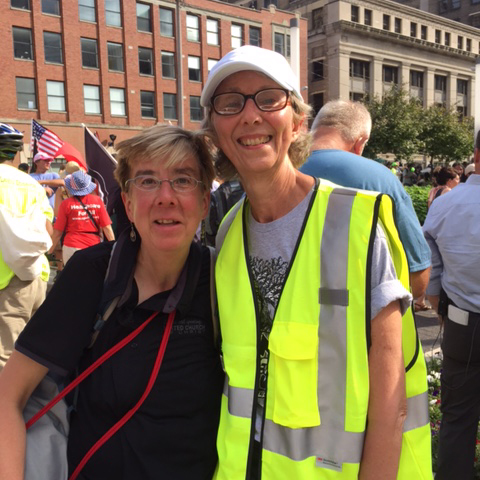 "The thing that was so important this morning is to acknowledge that our nation is like Ezekiel’s dry bones, and that those dry bones need the breath of the Spirit — of our God in us — to come together," Campbell said. "Our prayer was about a reflection on coming together, about ending racism, ending the gaps and divides, and [challenging] everyone to be missionaries for the common good."

After this stop in Cleveland, the Nuns on the Bus will travel throughout the New England region in the next week before the tour concludes on July 29 at the DNC in Philadelphia.

The UCC has been a longtime partner of NETWORK. "We share a common faith vision around advocacy on issues including the federal budget, immigration, affordable housing, healthcare, the well-being of women and families, and voting a democracy," Sorensen said. "In this divisive, polarized political climate, we need to take every opportunity to reach across the divides and establish conversation and dialogue that will lead to a stronger future."