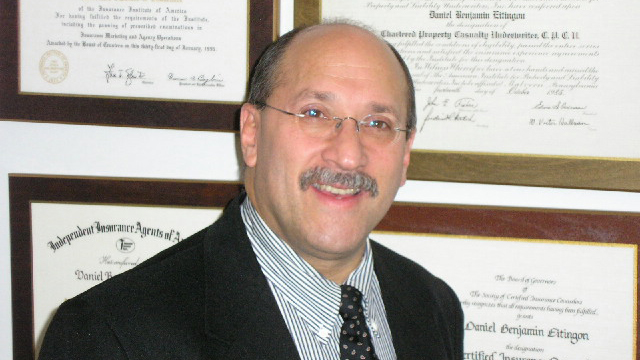 It is often said that love moves beyond bounds. For that to be true, love must move between faiths.

Danny Eitingon first came to know the love and extravagant welcome of First Congregational United Church of Christ, in Albuquerque, N.M., four years ago. Eitingon was born into the Jewish faith and still identifies as Jewish today, but he has been a member of First Congregational since 2012, and recently completed a two-year term as the congregation's moderator on May 22.

It was in the United Church of Christ that he came to learn that a person doesn't need to be Christian to lead a Christian life.

"As human beings, we share so many things in common, and can get a lot more accomplished by celebrating what we have in common than by battling over our differences," Eitingon said. "I learned that this concept is at the core of the UCC's mission and existence."

The UCC's general minister and president, the Rev. John Dorhauer, has known Eitingon since before his time as moderator. "He is a gentle, wise and compassionate soul who found in the extravagant welcome of First Congregational UCC in Albuquerque an appeal from which he could not walk away," Dorhauer said. "His embrace of their message of welcome, and their extraordinary celebration of his gifts tell a story of how love overcomes all obstacles. Everything about this brings me so much joy. This church may well be showing us what is possible when hearts expand."

As a child, Eitingon didn't have much participation in his local Jewish community. "After my brother and I were dutifully Bar-Mitzvahed, neither one of us ever went back to synagogue again," he said.

Before retiring to Albuquerque, Eitingon lived in Minnesota for 28 years, where he taught business management courses at a Minneapolis community college and had an insurance consulting business until 2010.

Aboard a flight to New Mexico, Eitingon met the Rev. Lee Albertson, former pastor of First Congregational, and they talked during the two-hour trip, after which Albertson invited him to attend a Sunday worship service. After that first visit to the congregation, Eitingon admits that he had "never been in any setting during my almost 63 years, let alone a house of worship, where everyone in attendance was accepting of me both as a Jew and a gay man."

Overtaken by the emotion of that affirmation, Eitingon was compelled to return to the congregation over and over. Eventually, he was recommended to the church's leadership to serve on its Executive Committee, first as vice moderator, then as moderator.

With that responsibility, however, came doubt. For the first time in his life, Eitingon felt a "crisis of faith," wrestling with the idea of being both Jewish and lay leader of a Christian church, unsure if he was betraying his Jewish heritage and struggling with his religious and spiritual beliefs. That's when he was introduced to Dorhauer, then the conference minister of the Southwest Conference.

"John walked me through a process whereby he helped me to understand and appreciate that the UCC would welcome and accept me irrespective of my religious beliefs or background and that inclusion of all people was at the core of the UCC's mission and ministry," Eitingon said. "At first, as one might expect, I was a little skeptical, but with John's support, guidance, and encouragement, I decided to move ahead with becoming the vice moderator of our church. At no time during this process did my being Jewish ever get brought into question or interfered in any way. I was never told that I'd have to 'convert' to Christianity to become a member of our church or to participate in any of its activities including taking communion. Thanks to John and Lee, I came to understand and revel in the fact that one doesn't have to be Christian to lead a Christian life."

In the end, by flipping through passages from the Old Testament, Eitingon learned about his Jewish faith, and about the teachings of Jesus Christ, at First Congregational.

"I became perfectly comfortable with the notion that I was a Jew leading a Christian life," he admits. "I also became proud of the fact that Jesus, a fellow Jew, is a role model to the Christian world that comprises billions of people."

With his time as moderator concluded, Eitingon has assumed the role of chairing the congregation's Life Committee, which is responsible for coordinating the various activities that support the life of the church, such as holiday events, a fellowship hour, monthly potlucks, fundraiser events and an annual picnic.

"It's been a roller coaster of ups and downs over the past four years, but all-in-all, it's been one of the most exhilarating, wonderful and greatest learning experiences of my life," he said. "I am eternally grateful for the opportunity to serve as vice moderator and moderator, and for all of the support, encouragement and confidence invested in me over the past four years."