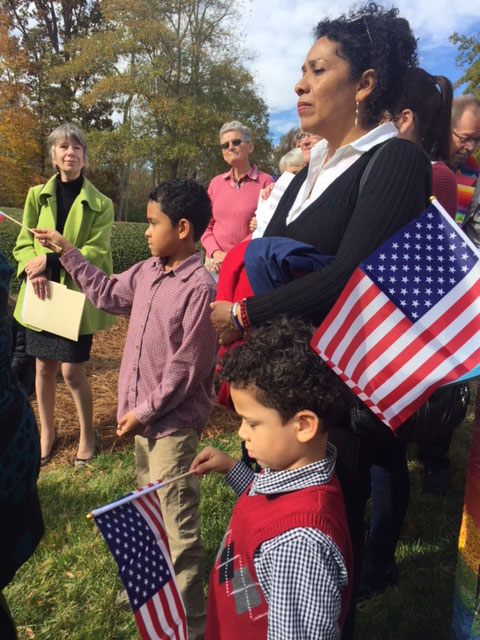 A North Carolina mother who spent 90 days in sanctuary in a Greensboro church until a federal judge vacated her deportation order is now in danger of beginning the deportation process again.

Minerva Cisneros Garcia, a single mother of three, lived with her two youngest sons at Congregational United Church of Christ from June 29 until Oct. 2, when the ruling of a Texas immigration judge freed her to return to her home in Winston Salem, N.C.

She and her supporters believed that was the end of the issue.

But on Thursday, Nov. 16, Garcia was ordered to appear for a hearing at the Immigration and Customs Enforcement office in Charlotte, N.C., where she and her attorney learned that the agency is going to continue to pursue the case against her.

The Rev. Julie Peeples, Senior Minister of Congregational United Church of Christ, was one of eight UCC clergy in a group of 100 supporters who accompanied Garcia to the ICE office with her sons Antonio and Mateo.

"Minerva is a devoted mother and cherished member of the community," said Peeples. "She has been through tremendous hardship. For ICE to ignore the orders of a federal judge and continue to target her is immoral and cruel. To separate families goes against our values as people of faith and as Americans."

The group, unsure Garcia would even be able to leave the immigration office, marched around the parking lot to show their support. Carrying American flags, they spent an hour singing "We Shall Overcome," or chanting, "Up, up with education, down, down with deportation!" 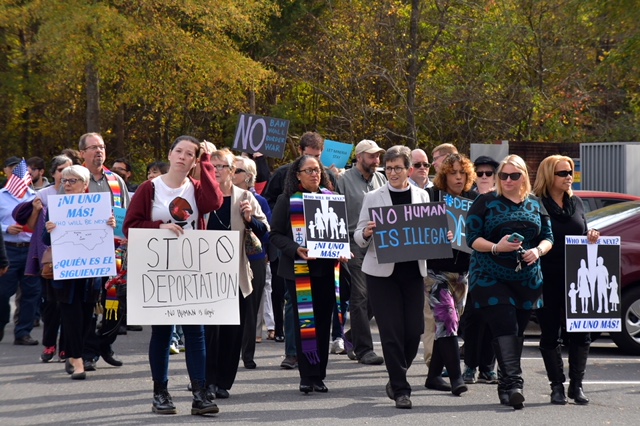 Garcia was released, fitted with an ankle bracelet, so agents could monitor her whereabouts until a court hearing before an immigration judge in North Carolina. Peeples said Garcia's pending court date is not set yet and could take many months due to the backlog of immigration cases.

Garcia came to the United States from Mexico in 2000 with her two older sons, one who passed away from cancer and another, Eduardo, who is blind. She has lived in Winston Salem for 17 years, working, paying taxes, raising her children. She has applied for a green card and is working toward citizenship. For months, her family, supporters, and leaders of the North Carolina faith community have been calling on ICE to allow Minerva to stay in this country.

"Minerva and her children, like so many thousands of other immigrants, want nothing more than to live their lives in safety, to contribute to our communities," said Peeples. "While we are relieved she was not detained, burdening her with an ankle monitor is obscene and completely unnecessary. We call upon DHS and members of Congress to stop the criminalization of our immigrant neighbors, including Minerva. And we will continue to accompany this brave family until they are free."