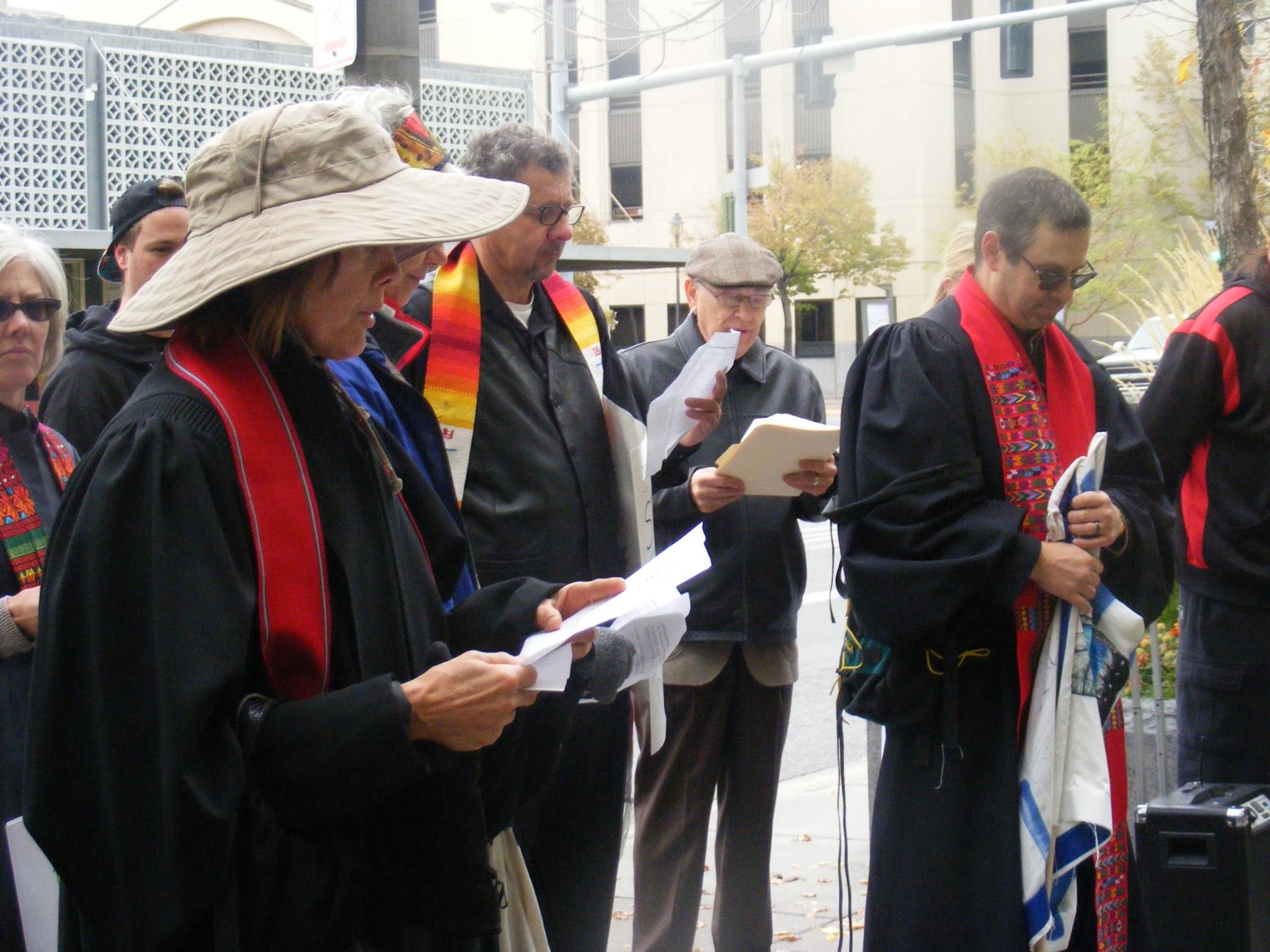 Five UCC clergy, church pastors and their conference minister, along with dozens of their neighbors joined Native American leadership in Billings, Mont., on Monday, Oct. 10, Columbus Day/Indigenous Peoples Day, to stand in solidarity with the thousands on the Standing Rock Sioux Reservation defending the water and their sacred tribal sites from the Dakota Access Pipeline.

"First Church in Billings has developed a close relationship with the downtown community in Billings," said the Rev. Marc Ian Stewart, conference minister of the Montana-Northern Wyoming Conference UCC . "And we are aware of the importance of being in solidarity around mutual concerns. Here at this place, we know of the devastation that can happen through burst pipe lines.  Twice in recent years there have been major oil pipeline breaks under the Yellowstone (Elk) River. This is our water supply."

The Rev. Mike Mulberry, senior pastor at Billings First Congregational Church UCC, organized the action in collaboration with Native American leadership and VISTA volunteer Kayla Janowski, to join four days of prayer and action with Standing Rock, Oct. 8- 11, a symbolic event, fours day for each of the four sacred directions. The action in Billings started on the banks of the Elk (Yellowstone) River with a Native prayer service, blessing the water, and drinking from the river, which was followed by a Christian liturgy, remembering baptism by water and affirming the Standing Rock statement, ‘Water is Life!' 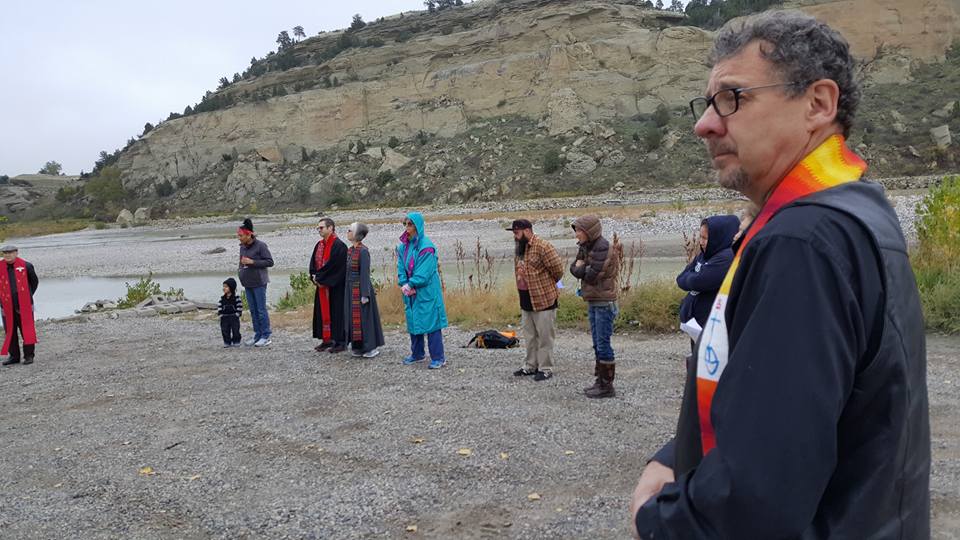 After the river service, the participants, which included Mulberry and Stewart, the Rev. Tracy Heilman, pastor of Columbus Community Congregational Church UCC, and UCC ministers the Rev. Cheryl Stewart and the Rev. Kenneth Crouch,  began the long march into downtown Billings, carrying banners, posters, and ceremonial flags, singing and praying along the way.

The procession stopped first at the Wells Fargo Bank, one of the primary financers of the Dakota Access Pipeline, where Native leaders smudged around the building, burning sage and sacred herbs, marking the boundaries of the bank and praying in hope "that their hate, fraud and violence will be contained and limited by a good and gracious God."

The march continued to the courthouse in Billings, where participants read the Bozeman, Mont., ordinance that changed Columbus Day to Indigenous Peoples' Day, praying Billings would follow suit and join other cities around the country in making this change to honor and celebrate indigenous peoples.

"With the number of indigenous people in and around the Billings community, such a statement would be an important step toward ongoing reconciliation, healing, and truth-telling," Mulberry said.

"My solidarity with the Standing Rock tribe and with Indigenous People's Day comes from my 12 years of serving in the South Dakota Conference," said Stewart. "There, I learned first-hand of the grace and blessing our Lakota brothers and sisters extend and the life of the sacred that I need to take more into my life." 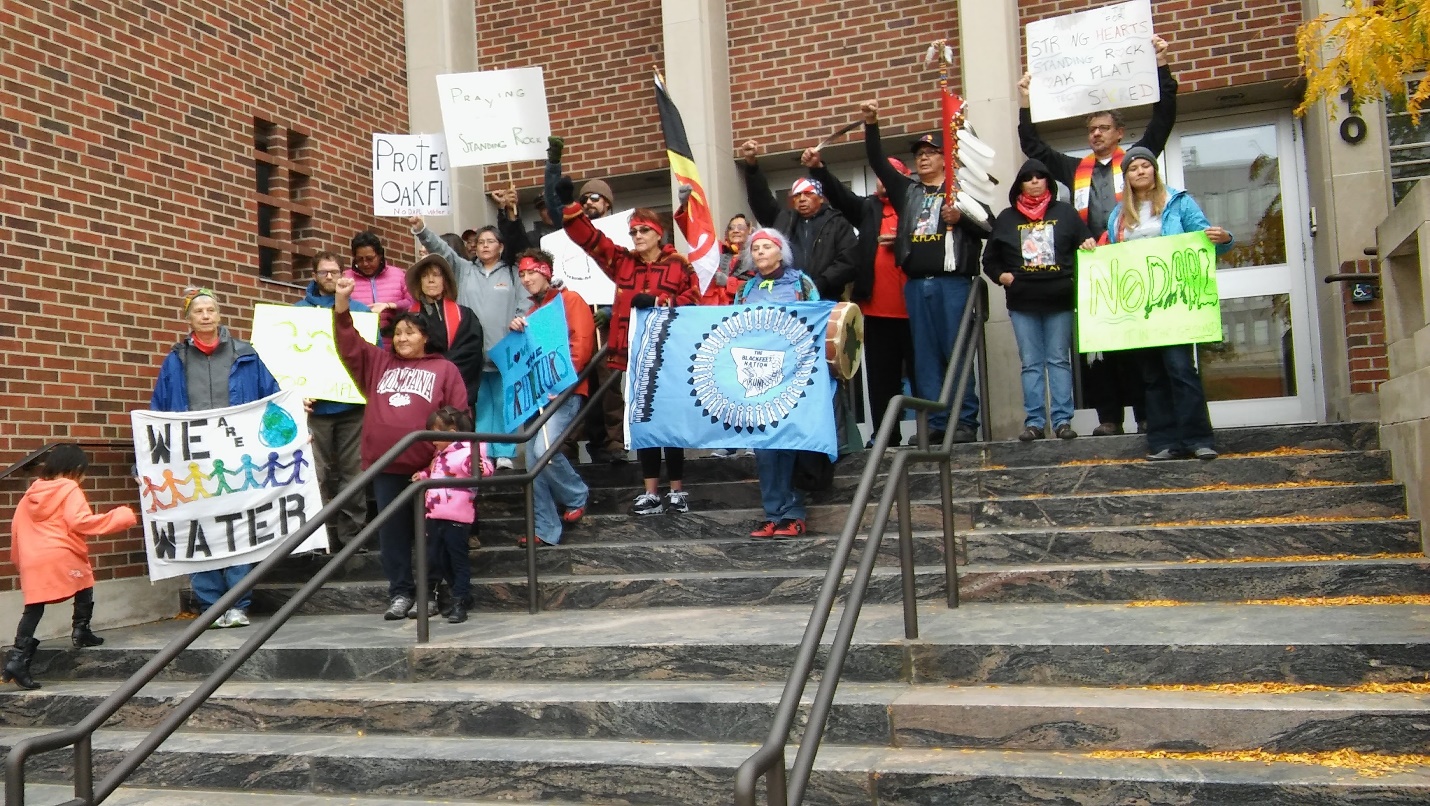 The march ended at Billings First Congregational with a potluck for all of the marchers.

Gordon Plain Bull, Jr., one of the organizers of the event, said he considered the action a good start toward increasing the leadership role for Native people in Billings. As a long time organizer himself, Plain Bull was heartened by seeing the wide support for Standing Rock.

After the march, participants were encouraged to contact President Obama by calling and messaging to tell him 17 million people are at risk of losing their clean water if the Dakota Access Pipeline endangers the Missouri River. As of now, according to a joint statement Oct. 10 by the Departments of Justice, the Interior and the Army, "The Army continues to review issues raised by the Standing Rock Sioux Tribe and other Tribal nations and hopes to conclude its ongoing review soon." The government has repeated its request to the pipeline company to halt construction around Lake Oahe, which feeds the Missouri River, until it determines how to address the environmental concerns.

"It seems so fundamental. Water is life. We are water," said Mulberry. "But maybe this is Native people leading the way to bring us to the path God intends for us. We need indigenous peoples. We need their leadership. We need their story. It may be the thing that yet saves all of us."