A coalition of United Church of Christ pastors, part of an ecumenical group of protestors in Chicago who publicly showed their disagreement with the Nashville Statement, brought their message to the doors of Moody Bible Institute on Monday.

"When the President of Moody Bible Institute signed the Nashville Statement he slapped LGBT Christians and Open and Affirming Churches in the face. Monday we turned the other cheek, boldly not meekly," said the Rev. Matt Fitzgerald, senior pastor, Saint Pauls UCC. "The Nashville Statement is full of lies about Christ and his LGBT siblings. Christians have an obligation to protest Christian bigotry. Doing so brought me and others great joy."

Moody President Paul Nyquist and other Moody principals were among the 150 signatories of the Nashville Statement, a manifesto released by the Council on Biblical Manhood and Womanhood that rejects societal acceptance of LGBTQ issues.

In the group joining Fitzgerald were 40 people, from about a dozen churches and a number of denominations. The UCC was well represented – the Rev. Jason Coulter, pastor of Ravenswood UCC, and former labor organizer; the Rev. Rebecca Anderson, co-pastor of Gilead Chicago, a new church start, and Bethany UCC; and Pastor Jamie Frazier, who leads a new church start in Chicago's Uptown neighborhood, soon to be welcomed in good standing into the UCC.

"It was important for me to participate in this protest because I want people from all walks of life to know that there are LGBT-affirming churches out there who will celebrate the fullness of their identity," said Frazier. "Thankfully, the United Church of Christ is home to a great many churches that see the parts of people that other religious spaces deem worthy of oppression as evidence of God's diversity." 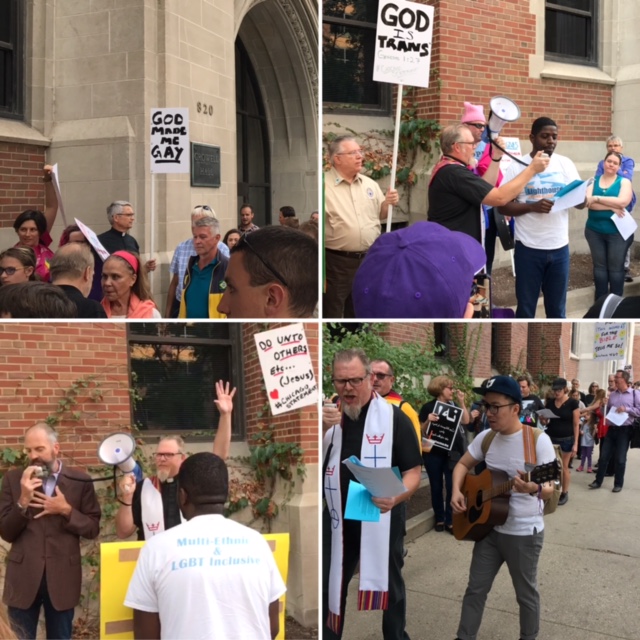 "Bringing a Christian argument to the doorstep of Moody's president was a terrific way to be the church," Fitzgerald said. "Hopefully we threw some light to Moody's gay students as well."

"As we were marching I saw this young man walking down the sidewalk, watching us with a look of disdain on his face," Fitzgerald continued. "He was not sure what we were doing, but as he got closer that look went from disgust to confusion to almost joy. He came up to me and asked what we were doing here, and after I explained it to him he said 'I graduated from here 3 years ago, and I came out right after my graduation party, and immediately moved to California. Thought when I returned to Chicago I would just walk by and see if things have changed.'  I took his contact information and hope to hook him up with a church out in California."

"Many UCC churches are engaged in the work of equipping people to face and fight the oppression they have for too long silently endured," Frazier said. "The march at Moody Bible Institute, which drew mostly clergy and parishioners from UCC churches, is evidence of that fact."