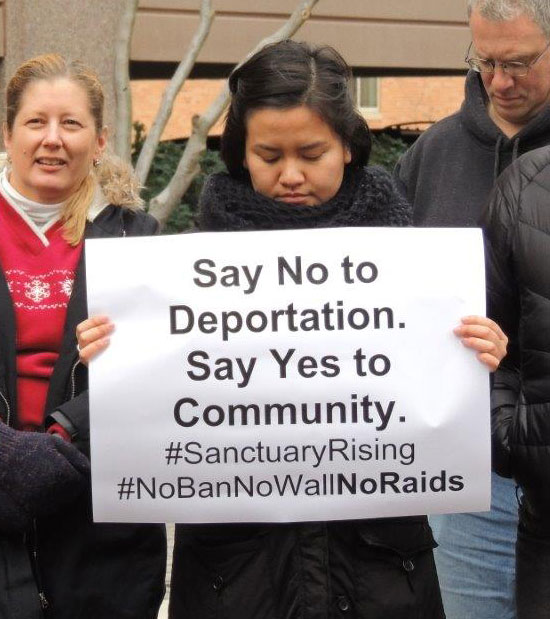 The Department of Homeland Security's sweeping changes in immigration enforcement, with new policies that give customs agents and law enforcement more freedom to arrest, detain and deport people without papers, are riling up UCC clergy around the country.

"I am grieved and angry that this administration seems bent on pitting its political policies against the traditional American values and faith traditions that make our nation great," said the Rev. William M. Lyons, designated conference minister, Southwest Conference UCC. "If only the president held himself and his own staffers to the standard of perfection-under-the-law he asks of others."

"These new guidelines are the essence of tragedy," said the Rev. Donna Schaper, senior minister of Judson Memorial Church in New York City. "They over-reach. They fly too close to the sun. They are filled with pride and hate and self-protection. They incarnate and embody pride instead of humility, fear instead of love and America first instead of America great. The first shall be last and the last shall be first."

The Rev. Delle McCormick, who pastors Rincon Congregational UCC in Tucson, Ariz., and serves as a pastoral presence for hundreds of Central American children in government custody or in a Homeland Security detention center, noted that ICE agents were checking ID's outside a grocery store in South Tucson yesterday.

"This morning I am gathering my energy to face a day when I lead worship for 300 children who are seeking asylum in the U.S., many of whom now face an even higher probability that they will be deported back to the violence from which they fled," she said.

"I am gathering my energy to face those with whom I am meeting to help prepare for the onslaught," McCormick continued. "One family in particular has been here for twenty years and has three children, two of whom are citizens and all of whom are straight-A students. Their extended family has many members who now are facing deportation. They are loving, honest, and hardworking people who contribute so much in their presence here. And they are frightened and angry, but mostly frightened as they face the likelihood of family members being deported.

"Walter Brueggemann writes that the role of a prophet is to criticize and energize. That grows increasingly difficult with each new day of this administration, but is ever more urgent and necessary."

The Rev. Talitha Arnold, senior minister of the United Church of Santa Fe, New Mexico, was meeting with the Santa Fe City Council Committee on Public Safety, which is considering a Sanctuary City resolution, when the news of the enforcement crackdown broke.

"If the goal is to make the country safer, these new actions by the administration will undermine it," Arnold said. "Studies show and police departments know that instilling more fear in the immigrant and refugee communities keeps people from coming forward with information, it increases violence against women and children, and reduces cooperation with the police and other authorities. Similarly, people of all political persuasions who live in border states know that the 'wall' won't accomplish that goal either. It is a foolish waste of money and an environmental debacle. All these new actions do is waste a huge (to quote the current president) amount of resources and increase fear, division, and hatred."

"It destroys the whole fabric of community." The Rev. Oby Ballinger, pastor of Edina Morningside Community Church UCC, west of Minneapolis, Minn., has seen that first-hand. A few weeks ago, he was called to a Latino neighborhood where nine people were taken away as they made their way to work that morning. As part of clergy crisis team, the faith leaders were trying to detirmine  the status of those detained. He and the other clergy went to the Immigration and Customs Enforcement (ICE) office in Minneapolis to find out where these folks were so they could get information to their families, but the office was locked up before posted closing hours.

"It was clear people were fearful, they were concerned about traveling, going to work or school, and they weren't sure who was on their side," Ballinger said. "Even showing up as clergy, they weren't sure if they could trust us. We went to be a visible presence of the body of Christ in this time of increased anxiety. To try to find out what happened their neighbors. And to make sure they knew they weren't alone under the increased strain of this targeted escalation."

"These actions fly in the face of any Christian teaching to care for the stranger or love the neighbor or the fact that Jesus was a refugee and immigrant. But you don't have to be a Christian or any other faith to see the smoke screen of these actions," Arnold said. "You simply have to have common sense to know that these actions are designed to stir up fear and hatred--not to solve the problem."

Learning that close to 11 million immigrants in the United States without documentation can be targeted for deportation furthered their resolve to work for a just world for all God's children.

"The Southwest Conference United Church of Christ shall continue to live Gospel values under any and every political policy, doing for our neighbors what God requires of us: promoting justice, loving mercy, and walking with God humbly," said Lyons. "Who are our neighbors? Every person we choose to love as ourselves, no documents required!"

This week, join advocates across the U.S. proclaiming #WeAreAllAmerica,[http://p2a.co/bC9D9Wy] using Congress' President's Day recess to make their voices heard by calling on representatives in their district offices and expressing their opposition to deportations that are separating families, blocks on the resettlement of refugees, and the discrimination against Muslims in U.S. immigration policies.