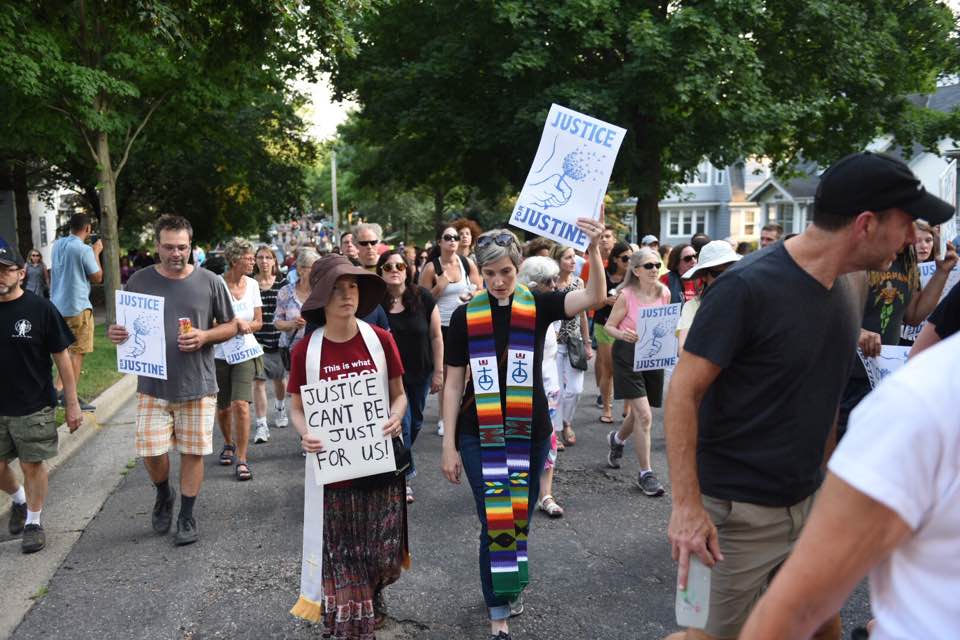 The United Church of Christ was well represented at multifaith march and rally in a Minneapolis neighborhood Thursday evening, where hundreds gathered to pray, mourn and demand justice for the people around the country killed by police, including 40-year old Justine Damond, a resident of the Fulton area, fatally shot by an officer last weekend.

"We gather here to grieve together in solidarity with the families, the families of those killed by police," said the Rev. Ashley Harness, pastor at Lyndale United Church of Christ and a resident of the neighborhood, as she opened the vigil with prayer. "Justine Damond, Philando Castile, Jamar Clark, Marcus Golden, Tycel Nelson, Terrance Franklin, and all those who have been killed by police in Minnesota and beyond."

Harness helped organize the July 20 march, which drew activists and clergy from across the Twin Cities. The Rev. Eliot Howard, pastor of Linden Hills UCC, the Rev. Emily 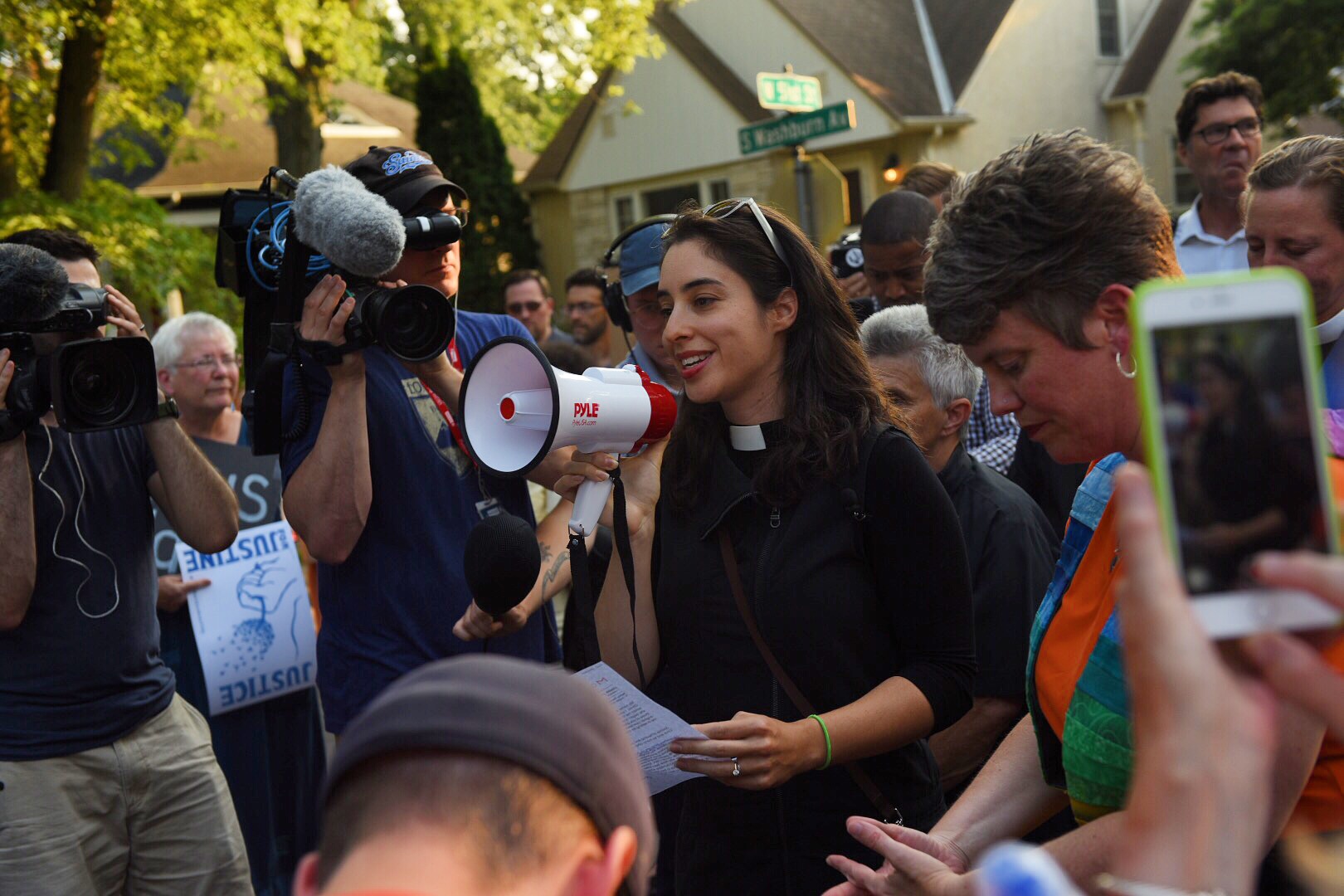 Goldthwaite-Fries, associate minister of Mayflower UCC, and Rev. Desiree Hartson Gold from South St. Paul joined Harness and the Rev. Rebecca Voelkel of Lyndale UCC's Center for Sustainable Justice, standing with Buddhist, UUA and Lutheran colleagues. Members of Damond’s family, and the family of Philando Castile, the black man who was shot and killed by a police officer in Falcon Heights, Minn., last year during a traffic stop, stood together supported by the crowd.

"Help us to bear together in community our grief that looks like everything from tears to rage, all of which are holy," Harness said. "Help us who are newer to this world of police violence to listen with openness and humility. Help those of us who have known this reality for far too long to be strengthened. Help ALL of us to become your force of healing and justice in the world here and now as we march together."

Sarah Kuhnen, a longtime member of Lyndale UCC who’s lived for almost 30 years just a block away from where Damon was killed, touched the people gathered with her remarks. 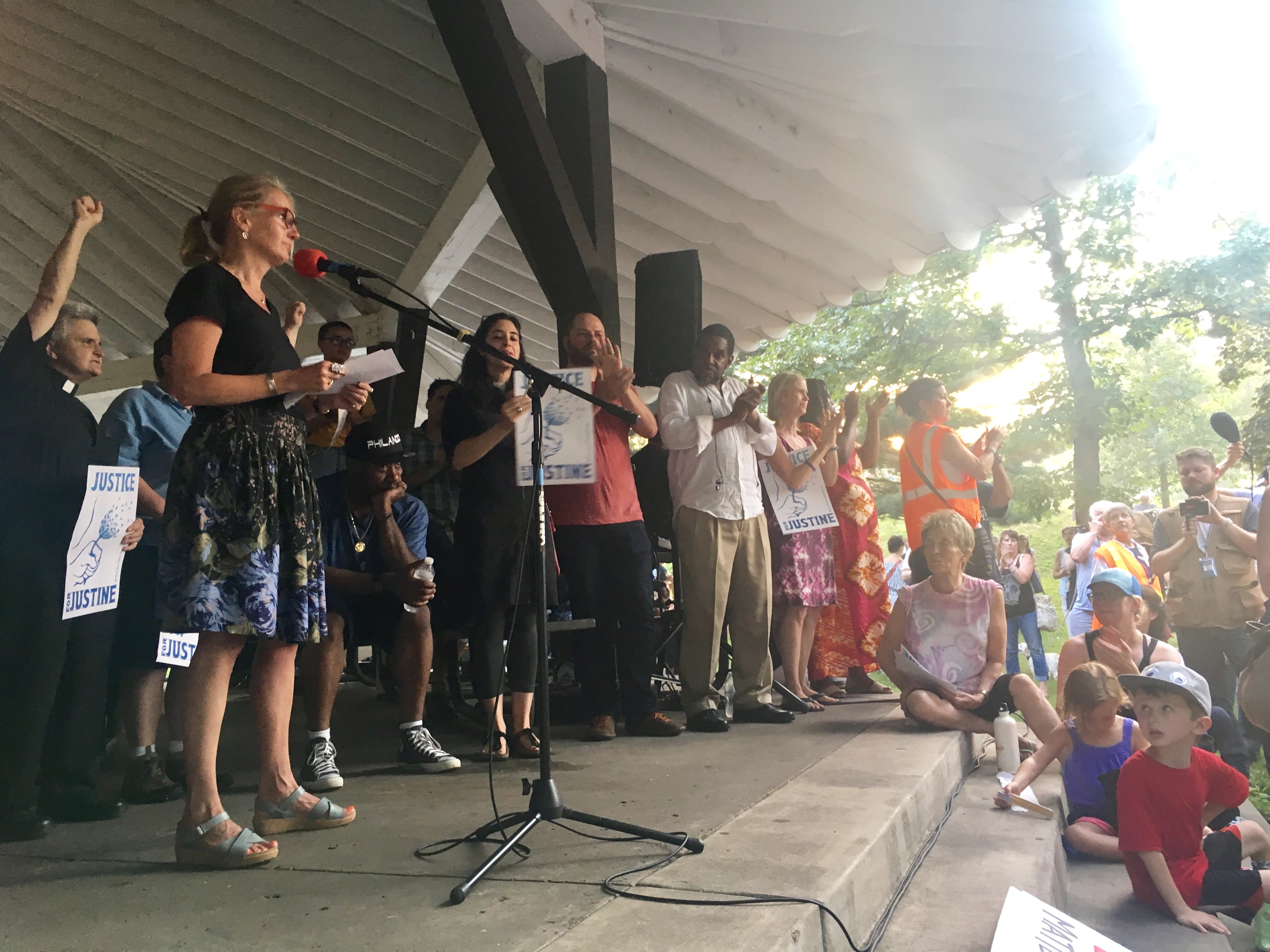 "This tragedy is close to home for me, in a way I have never had to experience before with the police shootings in our city," Kuhnen said. "I have to be honest here, and explain my privilege. I have felt completely safe in my neighborhood as a white woman, a mother, a wife and a citizen of this city. I walk everywhere and it’s in those walks I met Justine. But I stand before you now to tell you that today, I feel scared. I don’t feel safe in my neighborhood. My illusion of comfort, living in a middle- to upper-middle class, predominantly-white neighborhood has been shattered. We have a major problem with police violence in our city and our country. This is not about one police officer. This is about a broken system of policing that needs systematic change!"

"As a white woman, I have never had to worry about my own safety when calling the police. But I know that is a luxury that people of color in our city don’t have," she continued. "Valarie Castile, Philando Castile’s mother, didn’t get to call the police without worrying about her own safety or the safety of her son. People of color have been killed by the police for far too long. It is time, it is past time, for me and other white people to wake up to that reality. Because it is all of our realities now. These are all our mothers and all our children, our sons and our daughters. We all deserve to feel safe."

The activists, representing several religious traditions and the NAACP, Black Lives Matter Twin Cities, the Women's March Minnesota, Communities United Against Police Brutality turned out in solidarity across racial, economic, and geographical lines. All of the clergy in the group, Voelkel said, have been working together for several years on questions of white supremacy, police brutality and racial justice.

"It felt to me as if folks were very present," she said, "and I talked to several white folks who said ‘I didn't get it until now.’ ‘I didn't understand about police brutality until this.’ It felt like a collective awakening for those gathered."