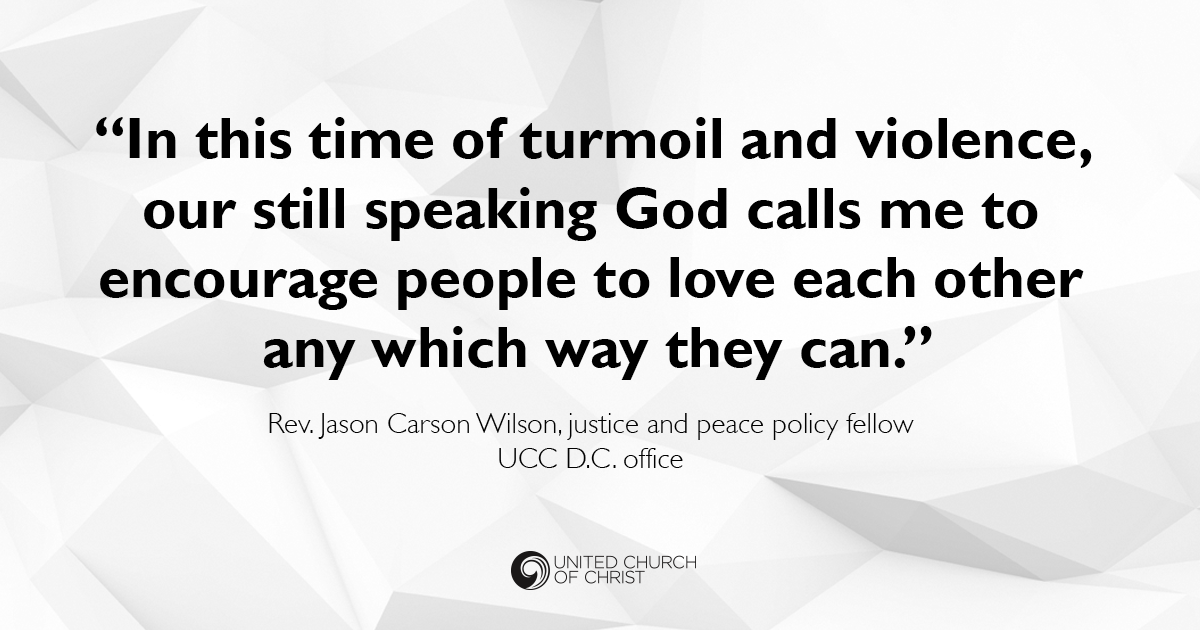 United Church of Christ communities around Washington D.C. are responding to acts of hate and racial intimidation — in our nation's capital and around the country.  Since late May, several nooses have been discovered hanging in spots around Washington D.C., three in the last week, with some of them found in areas with historical significance to the Civil Rights movement and the battle against racial discrimination in the United States.

"These hate crimes are a symptom of a more hostile segment of our society, which uses its fear to fuel and justify discrimination and violence," said the Rev. Jason Carson Wilson, justice and peace policy fellow for the UCC D.C. office. "Some would say drawing attention is only meant to encourage their bad behavior. The jury is out on whether that's true. However, I believe that drawing attention to these hate crimes shows that both the faith community and the wider United Church of Christ stand in solidarity with the Black community."

Authorities aren't certain who is leaving these messages of hate, or if they are connected, but the incidents of racial intimidation spurred a broader discussion about racism at Plymouth Congregational UCC at a town hall meeting on Tuesday, June 6. 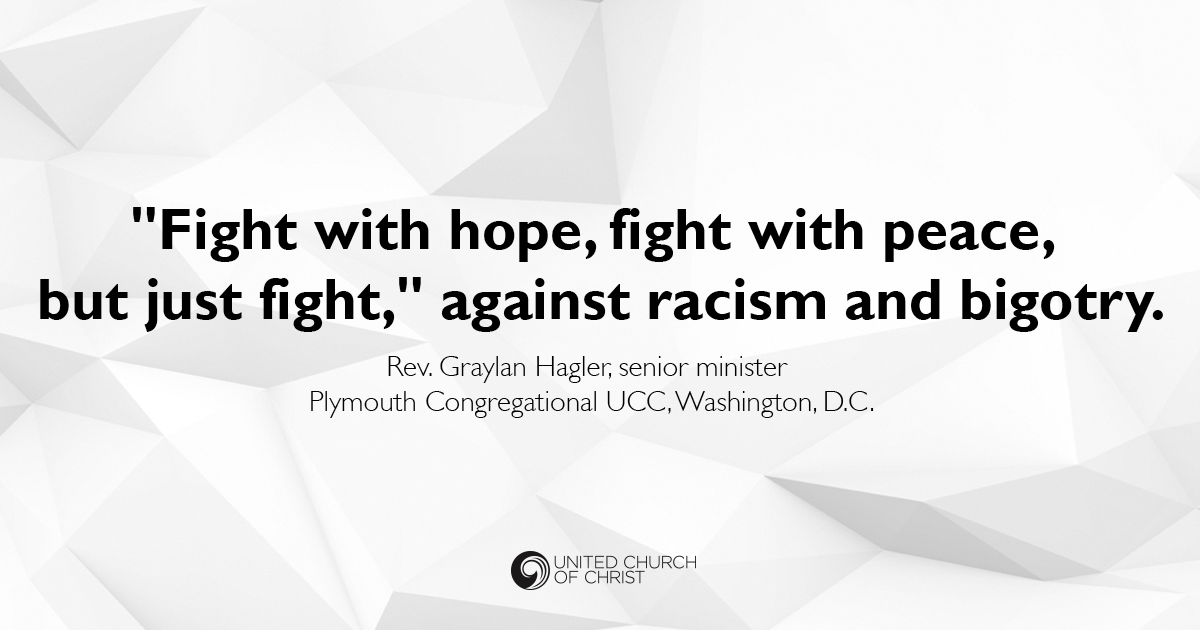 The Rev. Graylan Hagler, senior minister at Plymouth, urged the gathering to "Fight with hope, fight with peace, but just fight," against racism and bigotry.

He suggested to those gathered that they find ways to be proactive in response to this kind of hate crimes.

"Plymouth is working with groups in the community and forming rapid response teams to confront threats and acts of racial violence and intimidation," Hagler said. "The rapid response teams will work to define the issue and the threats and not allow the media or politicians to control the narrative. Additionally we will organize to confront white supremacist groups on the streets and wherever they emerge."

"God—in whatever way he, she or they are known to you—loves us all equally," said Carson Wilson. "As faithful people, we should love everyone equally. That love can range from respecting that different people are on different journeys to establishing deeper connections. In this time of turmoil and violence, our still speaking God calls me to encourage people to love each other any which way they can."

A noose was found hanging from a tree near the Hirshhorn Museum, part of the Smithsonian, on the National Mall on Friday, May 26. Another was discovered in the Smithsonian's Museum of African American History and Culture, on Wednesday May 31, in an exhibition on segregation. Two days later, rope was found at the Martin Luther King Jr. memorial in Washington D.C. on a bench near the National Mall.

Also on Friday, June 2, a noose was found at a construction site near Anne Beers Elementary School in Washington D.C. These incidents follow one last month, when someone hung bananas with racist messages from nooses at several locations at American University.

According to the Chicago Tribune, the Southern Poverty Law Center (SPLC), which tracks bigotry, has recorded an increase in hate crimes in the U.S. since the election of President Donald Trump. Between Election Day and Feb. 1, the SPLC noted it collected information on about 1,800 hate-related episodes from almost every state.

Because of the prevalence of these despicable acts of violence and racial intimidation since the election, and before the nooses were discovered around their city, D.C.'s First Congregational United Church of Christ started a study group on White Privilege last Wednesday.

"The discussion is one of several anti-racism efforts called for by the Anti-Racism Working Group at First Church," said the Rev. Karen Byrne, one of three facilitators for the early summer discussion series. "It has been actively explored since the Let's Talk curriculum was published in early fall 2016."

"We made explicit that we hope the discussion series will be the first of three efforts – first, a conversation among white people; second, a discussion among people of color, and, finally, a discussion among all of the participants," Byrne continued. "We are motivated by the ongoing difficulty in our society arising from racial difference and prejudice, and a compelling sense of needing to look at our own habits and assumptions. And, finally, but no less important, our alarm at the state of our national politics, and wanting/needing to light candles in this darkness. We have become convinced that people who accept and defend racism have been re-energized in our country, and that that movement needs to be affirmatively opposed, not just objected to. We see the white privilege discussions as a way to prepare ourselves to do that."

The discussions at First Congregational are just one step, part of an effort that will require much more than study and reflection on the part of white people. The church's Anti-Racism Working Group has planned a multi-pronged approach, which also includes activism and reflection, personally, as a congregation and in the community.

"In addition to these current conditions which motivate us, we are inspired by the deep root of anti-racism work at First Congregational," said Byrne. "Our church was founded in 1865 by abolitionists who had come from New England to serve in the Lincoln administration, and, not finding a Congregational church, started one. Our first defining crisis was about whether blacks should worship in seats next to whites: in 1869, the segregationists left, including the pastor. We were reminded during our 150th anniversary observance of these origins, and intervening civil rights history."

Hagler said addressing the system that contributes to racial bigotry is just as critical in this day and age. "We are also predominantly a white liberal church and because we know how to say the right things, and analyze the issues of race and white supremacy appropriately, the whiteness of the UCC believes that someone else is the problem and not the liberal whiteness of the UCC."

"This isn't just talking, this is coming to terms, especially in a white liberal church, that we are part of the system," Byrne said. "That whether we aware of it or not, we are part of a system that inherently favors white people. When we think about that fact — and what to do about it — it changes the ground we are standing on. It changes the way we act, in ways large and small."

"Education about white privilege doesn't necessarily render the courage for people to do something about its dismantlement," Hagler said. "We need people to take the gospel serious enough to change sides and step into places where they are uncomfortable and challenge the systems that benefit them currently."