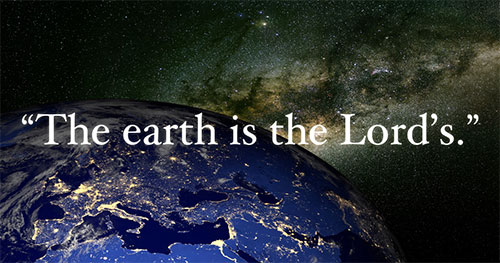 The focus on creation care will be very evident in many United Church of Christ congregations over the next few weeks, with Earth Day on Saturday, April 22, followed by Earth Day Sunday. The next weekend, on April 29, the People's Climate March in Washington, D.C. and Sister Marches around the country will be drawing environmental advocates from across the country, called to put their faith in action for the sake of our planet.

"Preserving God's creation is perhaps the greatest theological mandate of our time," said the Rev. Jim Antal, president and conference minister, Massachusetts Conference of the United Church of Christ. "As climate change worsens — as creation offers chaos in place of continuity — injustice in all its forms is multiplied. Together with our interfaith partners — as people of faith — as the church — this is our calling. It is neither partisan nor political. The earth is our home. Our responsibility is at the center of our covenant with God."

Antal, who will be in Washington, D.C, marching April 29, and preaching in Arlington, Virg., at Rock Spring UCC on April 30, has lived out his activist calling by making care for Mother Earth a focus of his ministry since the first Earth Day in 1970. He's working with UCC Minister of Environmental Justice the Rev. Brooks Berndt to organize members of the UCC to band together in D.C., or to join marches in their home communities on April 29.

"I don't know what effect it will have but my hope and my faith tell me it's important for all of us to raise our voices," said Barbara Darling, chair of Environmental Ministries for the Massachusetts Conference UCC and one of the organizers of the climate march in the Boston area. Darling chairs the Church of the Covenant UCC Consumption and Justice Group.

"Church of the Covenant has cared deeply about earth care for a very long time — at least 15 years," Darling continued. "We have a 'green team' which we call Consumption and Justice, and we work to raise awareness in our congregation about our sacred responsibility as Christians to protect and cherish the earth which God created and loves, and all God's creatures who share this earth with us--also created by God and loved by God. We try to make connections between our consumption choices as individuals, and the impact on animals and the earth. For example, among other things we encourage folks to think about eating less meat, since animal agriculture is a huge contributor to greenhouse gases, as well as a cause of immense suffering to billions of God's creatures."

Darling will be participating in a Sister March in Boston with other members of Church of the Covenant, after marking Earth Day Sunday with an annual special worship service tied to Creation care. The church, "Green Congregation Level 1" in the Massachusetts Conference, divested its endowment portfolio from corporations profiting from fossil fuels a few years ago.

As Darling said, "We believe that it is our calling as people of faith to respond to the God who loves us, and who loves the earth and all its creatures, by protecting our planet and all its inhabitants — through political activism, marches, personal lifestyle choices, raising awareness in our church and beyond."

Beverly Anderson, who attends Plymouth Congregational Church in Minneapolis, Minn. agrees. A member of the church's Caring for Creation committee, she had planned to be part of the Minnesota Interfaith Power and Light (IPL) contingent traveling to the nation's capital for the People's Climate March. But at 84, she decided the bus trip might be too much for her, so she donated her ticket to someone who couldn't otherwise afford to go.

"I want to support this event because I have loved the earth so much," Anderson said. "It is so beautiful and so kind. I want my grandchildren, and all the earth's human generations to come to also live in a beautiful and kind earth."

About 30 of the Minnesota IPL marchers are expected to be staying in Washington, D.C. at Cleveland Park Congregational United Church of Christ, pastored by the Rev. Ellen Jennings. She said about a dozen of her congregants will also be marching on April 29.

But first, their plans on Earth Day Sunday, also Car Free Sunday, encourage keeping the cars at home and walking to worship.

"Creation Care/Environmental Concerns is one of our five main Mission and Social Action priority areas," said Jennings. We'd like to do an energy audit of the church as part of some upcoming capital improvements, and we already recycle, compost, use eco-friendly lawn practices and reusable mugs for Coffee Hour."

Other environmental advocacy events, from blessing cisterns, to conversations on climate control, making signs for the march, interfaith prayer vigils, visits on Capitol Hill with Creation Justice Ministries, and a pre-march rally for renewable energy will gather members from other UCC congregations in the Washington, D.C., area in the next few weeks.

"It's essential for people of faith to show up in this moment, to bring to bear the wisdom of our traditions that call us to care for all of God's creation, as we build justice and equity in our communities," said Claire Curran, communications and outreach manager for Minnesota Interfaith Power and Light. "We know that climate change impacts everything that we love. So on the 100th day of this new administration, we will show that hundreds of thousands of Americans are not giving up. We will keep resisting and together we'll build the beautiful, creative, resilient solutions we need."