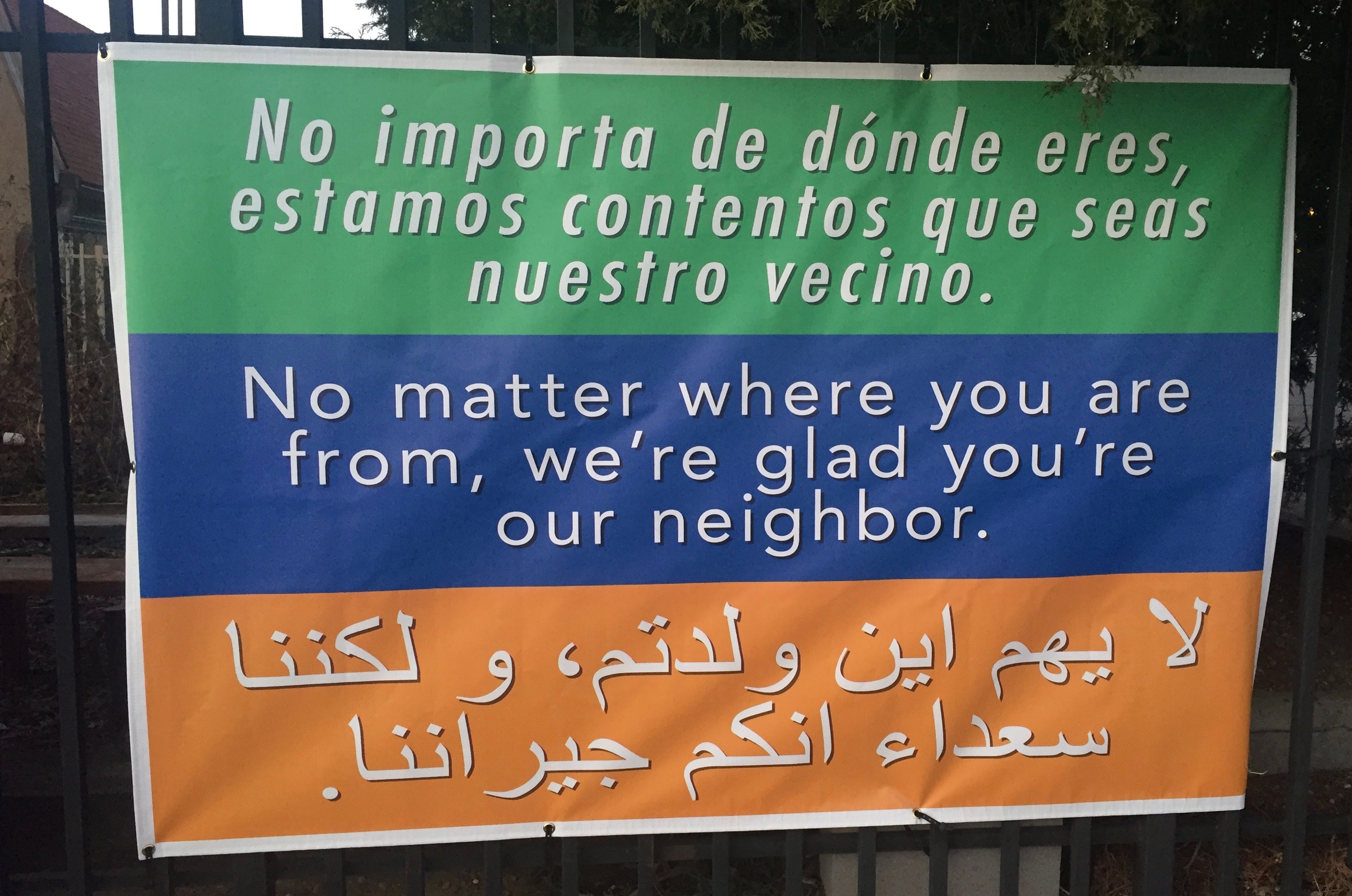 Congregations across the United Church of Christ are celebrating the ability to continue their ministries with immigrants and refugees after a federal appeals court refused to reinstate a temporary travel ban affecting people from predominantly Muslim countries.

The Thursday Feb. 9 ruling is especially heartening to several churches in the Southwest Conference United Church of Christ, which joined an amicus brief opposing the "anti-Muslim, anti-refugee executive order."

"Hundreds of refugees will enter the country, and dozens of aid workers will keep their jobs doing this gospel-centered work as a result of the most recent decision. There is cause to rejoice," said the Rev. William Lyons, conference minister of the Southwest Conference UCC. "The case is not over so the struggle for justice continues as the appeals process continues, albeit, with a lighter heart today."

Lyons, who joined the brief on behalf of the conference and with the support of national leadership, is joined by the congregations of six Southern Arizona churches (Good Shepherd UCC, Sahuarita; Rincon UCC, Tucson; Desert Palm UCC, Tempe; Scottsdale Congregational, Scottsdale; Shadow Rock UCC and First Congregational UCC in Phoenix) in the legal action.

The Rev. Randy Mayer pastors Church of the Good Shepherd UCC, Sahuarita, Ariz., 35 miles from the border with Mexico. His congregation has long been assisting refugees and immigrants who cross the desert seeking a better life. While the appeals court has denied the government's request to lift the freeze on the travel ban, rejecting almost every argument the Justice Department made, the legal battle is not yet over, despite the condemnation of the order coming from the progressive faith community.

"There is no respectable Christian argument that can square the decision to deny the admission of well vetted refugees from Syria and other majority-Muslim nations," Mayer said. "The United States has had a hand in destabilizing the region — effectively throwing gasoline on a house that is on fire and then barring the door as desperate families struggle to escape. These orders are not in keeping with the values and moral fabric of our nation."

The Rev. Delle McCormick, senior pastor of Rincon UCC in Tucson, also joined Mayer in a letter signed by 78 religious leaders from Southern Arizona sent to the president and to Congress.

"I have been in Tucson for 13 years and this is the first time I have seen such a diverse gathering of faith leaders to address an urgent issue," she said. McCormick, who will keep campaigning against restrictions on immigrants and refugees despite the appeals court decision, plans to preach on the executive order and its consequences on Sunday, Feb. 26.

"I lead weekly worship services for 300 children from Central America who are detained while they proceed with their petitions for asylum," McCormick said. "Rincon members, while they can no longer accompany me, are learning about the push/pull factors behind these children's journeys, and discerning how we can best be allies in their well-being."

Rev. James Pennington, pastor at First Congregational UCC in Phoenix, recently led his congregation's decision to become a sanctuary church. "The Administration's attempt to suppress our religious calling to care for refugees is an affront to our religious liberty enshrined in the First Amendment," he said. "Usually we go about our business quietly, but when confronted with tragedy and religious discrimination, especially from our own government, we will respond."

Rev. Ken Heintzelman, pastor of Shadow Rock UCC in Phoenix, added, "My congregation began extending sanctuary to refugees two years ago. Our voice is a voice of faith and justice. We call on our government to be on the right side of history and resist the temptation to create national policy based on fear and hate of suffering people." 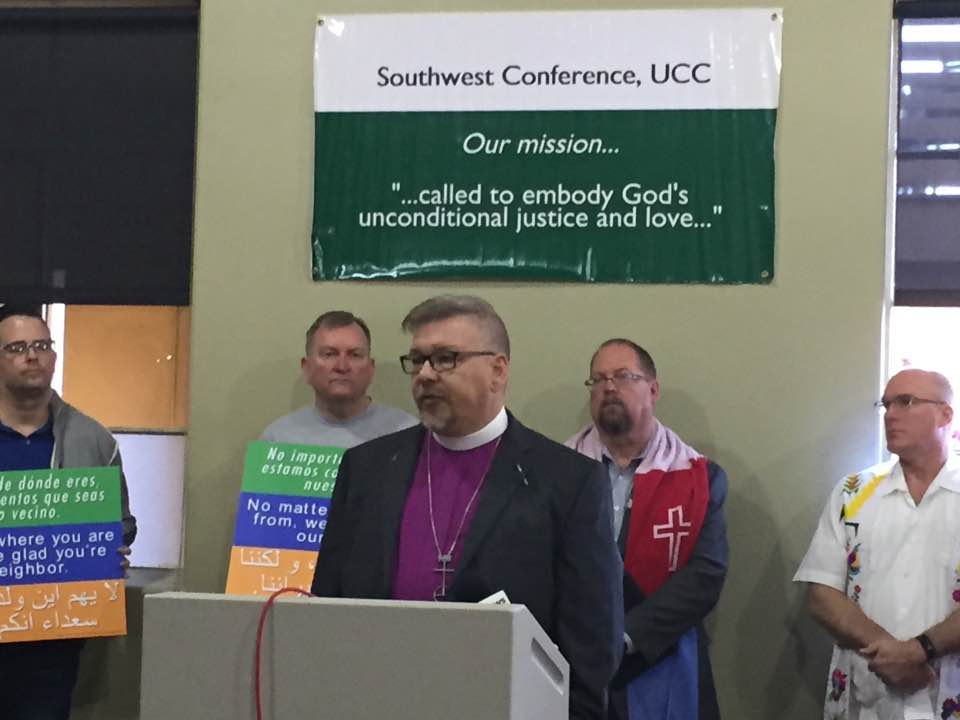 The unanimous decision of the three judge panel of the Ninth Circuit Court of Appeals indicated they were not convinced that national security concerns justified a reinstatement of the ban writing," the Government has pointed to no evidence that any alien from any of the countries named in the Order has perpetrated a terrorist attack in the United States."

"I am very proud of the Southwest Conference congregations and clergy who have joined the brief and taken a public stand in the writing of our nation's narrative in this moment," said Lyons. "Befriending the court is proving to be a very effective protest strategy."

And the strategy continues. President Trump's response to the decision, "See you in court, the security of our nation is at stake," indicates the case will certainly be appealed, and may be heard in the coming months by the United States Supreme Court.

"Jesus was a refugee. The United Church of Christ was founded by the Pilgrims, refugees themselves," Lyons said. "Faith communities in general, and the United Church of Christ in particular, have a long history of caring for refugees. The women and men and children seeking freedom, safety, and new beginnings have come from every religious background and with no religion at all, and from every corner of the world. Caring for them is in our DNA and is an essential part of our expression of religious freedom as Christians."