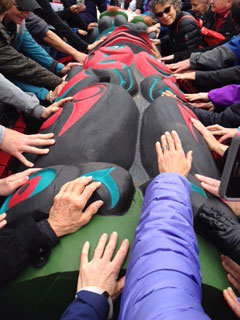 An environmental victory in the Pacific Northwest has been marked by a totem pole blessing at a Seattle UCC church.

"For the UCC, which launched its Three Great Loves campaign at General Synod this past summer, this gathering was an example of what love of neighbor and love of creation look like at their best," said the Rev. Meighan Pritchard, UCC environmental curriculum trainer and pastor of Prospect Congregational UCC, also in Seattle.

The totem pole celebrates the victory of the Lummi Nation and its allies against a proposed coal export terminal adjacent to the Lummi reservation and on sacred ancestral land. The terminal would have been the largest planned in North America. But the Army Corps of Engineers, after years of organized opposition, denied the construction permit because the coal export terminal would violate Lummi treaty-protected fishing rights.

On Saturday outside University Congregational, the crowd for the ceremony surrounded the totem pole as it lay on the truck that will carry it to the museum. A woman from the tribe circled the totem pole multiple times, smudging "the bad energy away." Elders from several tribes offered blessings and urged those in attendance to speak up about the importance of clean air, clean water, and the sacredness of creation.

David Anderson, church administrator at University Congregational UCC, said, "We're grateful for your [the tribe's] lead. We're grateful to partner with you."

Jessie Dye of Earth Ministry noted that faith leaders in the Pacific Northwest had written a letter of apology to the tribes in 1987, promising to stand with Native Americans and acknowledging terrible wrongs Christians had done to Native Americans over time.

When this coal export terminal was proposed in 2010, Jewell Praying Wolf James of the Lummi Nation remembered that letter. He contacted faith groups and asked them to help stop the project. Earth Ministry helped to coordinate that response, which included massive turnout at public hearings about proposed fossil fuel projects, thousands of letters in opposition, op-eds in newspapers, and religious leaders speaking out in public. At the ceremony, Dye thanked the Lummi leaders for putting their treaty rights on the line. She also thanked the Yakama, Quinault, Tsleil Waututh, and other tribes for their leadership and "strategic brilliance" in organizing opposition to this and other fossil fuel projects. 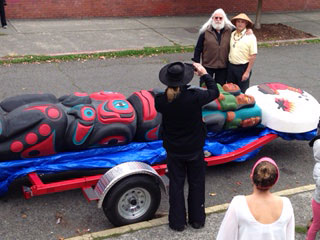 James, master carver of the Lummi House of Tears Carvers, noted that he initially didn't trust the Church, and was reluctant to contact religious leaders. But the Lummi needed the both the faith and environmental groups as allies. "As long as we unite and stand up, we're okay," he said.

James and the Lummi House of Tears Carvers have been creating these totem poles since 2013. Every year they drive a totem pole along a route tracing the path of fossil fuel projects such as coal and oil trains from the Midwest to the West. Rallies along the journey have strengthened the bonds between tribes, non-tribal environmentalists, and people of faith.

James noted that the Bible says God gave humans dominion over the Earth. "We forgot to teach that Earth is sacred. Every sermon should begin with this reminder."

From Seattle, the totem pole was headed to Tacoma for another blessing on Sunday. Stops will continue for similar gatherings all along the totem pole's route to Pittsburgh.

For more information on the totem pole journey and the exhibit at the Natural History Museum, see thenaturalhistorymuseum.org.