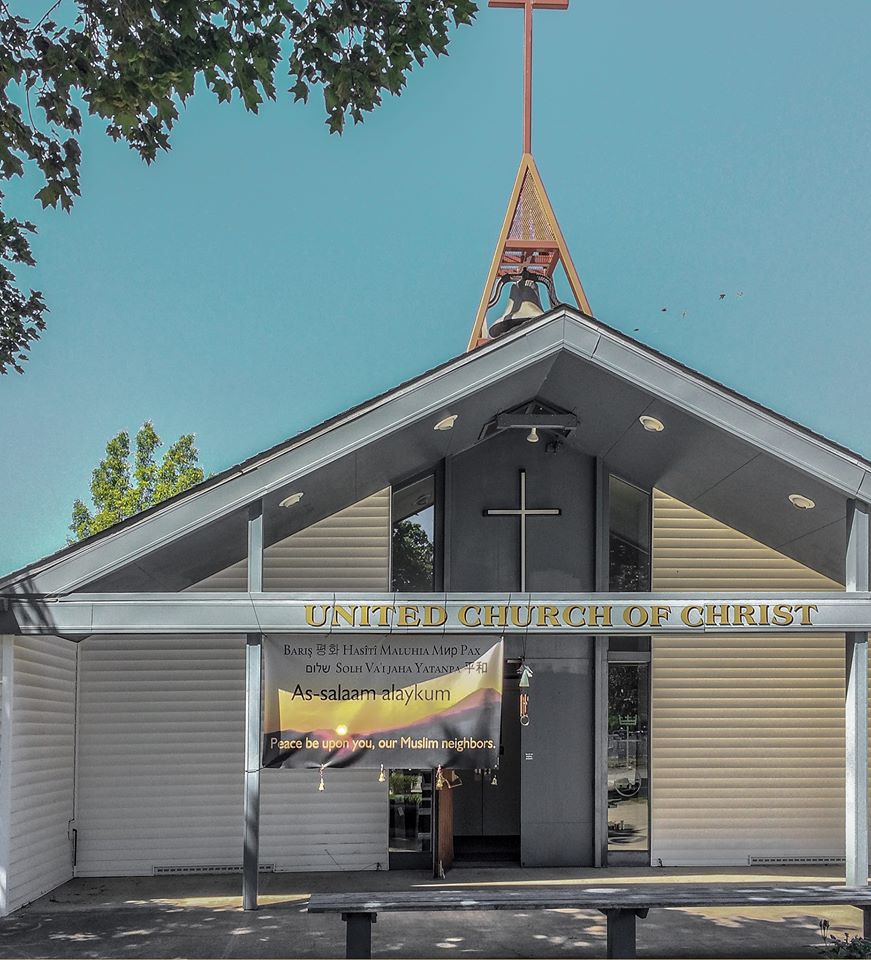 The Pacific Northwest Conference (PNC) United Church of Christ is joining UCC national leadership in reaching out to the thousands of churches across the denomination with an invitation to join a public campaign of love and acceptance of Muslim Americans.

The 'Building Bridges' initiative is building on a PNC campaign, 'Honoring Sacred Time', a visible witness of welcome throughout the holy month of Ramadan, where more than 20 UCC churches expressed solidarity with their Muslim neighbors by displaying signs and messages of welcome and love and attending Islamic celebrations.

"This is very much in line with the spirit of love and compassion that the gospel invites us to bear witness to," said the Rev. John Dorhauer, UCC general minister and president. "While we celebrate this bold, public witness — we also realize that Muslims in America live in fear all the time. It is going to take a concerted, collaborative effort on our part to shift the dialogue and engender feelings of trust, of love, and of mutual support across interfaith lines."

That's why the denomination is expanding the campaign across the wider church, suggesting four simple but effective actions every person in the UCC can pledge to do.

"I invite all settings of the United Church of Christ to study more about Islam, to visit a mosque in their area, to reach out to a family friend or colleague who is Muslim and engage them in conversation, to show visible signs of support for our Muslims neighbors, and to advocate for a change in how Christians speak about and relate to the Islamic faith," said Dorhauer. "With the world becoming more and more divided — and with those divisions creating a more frightful and fearful place to live in — these simple acts of love will go a long way to change the narrative about how we relate to each other across interfaith lines. These acts of compassion will help reduce the threat of ongoing violence and help build homes, communities, and nations of peace."

"The United Church of Christ is setting an important example of serving God by serving humanity," said Arsalan Bukhari, executive director, Council for American Islamic Relations (CAIR) in Washington. "The responses from UCC churches across our state and beyond really speak to the values and the character of UCC leaders. They really are showing the country what it means to 'do to others what you would have them do to you.'"

The UCC partnership with CAIR in the state of Washington went a long way to build trust and relationships in the interfaith community. 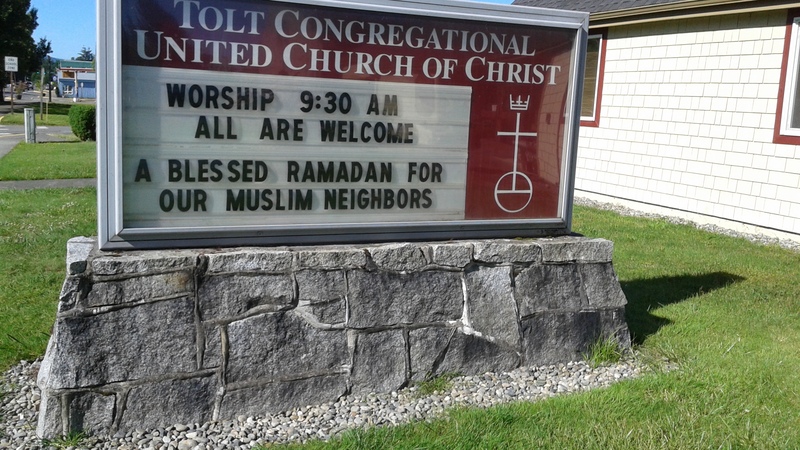 "When the Pacific Northwest UCC congregations created a banner campaign to honor our Muslim neighbors to remind all in our community of our shared humanity, the response was very positive," said the Rev. Stephen Haddan, pastor of Tolt Congregational United Church of Christ, Carnation, Wash., northeast of Seattle. "A couple weeks into Ramadan, a Muslim family, dad and two sons, came by to personally thank us for our hospitality and welcome.  It was a very emotional moment. His young sons were actually fearful of entering this 'Christian space' and the father really had to press on them the fact that this was actually a safe place.  This was an eye-opener for me as the father literally broke down and cried on my shoulders."

"Since then we were invited to break fast with them one evening," Haddan continued. "About 10 from the congregation went and were showered with gifts. Then after the Orlando shooting, we literally received phone call after phone call from people I do not know thanking us for our inclusion of all faiths and our open and affirming position."

"We are now working to make this a conversation by having mosques also post banners that affirm basic Islamic teachings about Christians, Jews and others who are 'People of the book,' and other messages that remind people of all faiths that American Muslims believe in the right and freedom of all Americans to live and worship in their own way," said Bukari. "We hope that this public and vocal affirmation in response to another public campaign by UCC churches will remind fellow Americans that while some may try to divide us, we are and always will be one nation under God, indivisible, with liberty and justice for all."

"I simply did not expect this project to have the kind of impact it did but, as I've listened, I've begun to understand why," said the Rev. Mike Denton, conference minister, Pacific Northwest Conference UCC. "For one, having these simple banners up is a public repudiation of the dominant narrative being shared about our interreligious relationship. We are told by our extremists that we are in an existential conflict in which only one 'side' can win. This campaign speaks to the possibility of peaceful, loving coexistence."

Denton and Bukhari said it also sends a very powerful message that is sorely needed.

"I didn't really understand the oppressive power of forced isolation," said Denton. "We might obviously be concerned about the threat of building physical walls but social walls can be as damaging. This simple campaign began to poke some holes in those walls."

Bookmark the Building Bridges Initiative website for resources, history and other information.