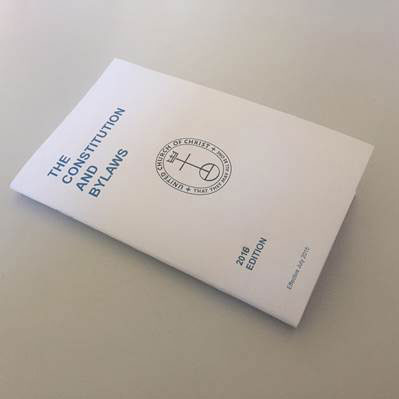 In an intentional effort to include all members of the wider church in the conversation about proposed changes to the United Church of Christ Constitution and Bylaws, the denomination’s governing board, the UCC Board of Directors (UCCB), is releasing a survey soliciting feedback on the set of bylaws changes and constitutional amendments planned for consideration by the UCC General Synod in Baltimore next summer.

The changes, which address the leadership structure of the UCC, the organization of the UCCB, and the denomination’s process of ordaining and recognizing ministers are outlined in detail in an FAQ document that accompanies the survey.

In a letter to the wider church, UCC Board Chair Dale Bonds and Geoff Brace, Chair of the UCCB Governance Committee note that the input collected by the survey will be considered to frame the proposed changes that will be brought before the board for a vote at its October 2016 meeting. The Board will then present the Constitution and Bylaws changes to the 31st General Synod in 2017.

"Because the United Church of Christ lives in covenant on issues of governance, the Board is taking extreme care to ensure feedback from our ministry partners,” said Brace. “We will use feedback gathered from this survey to shape any constitution and bylaw amendments brought to General Synod 31. Having been involved in previous amendments to the constitution and bylaws, I really do believe this effort goes above and beyond what we have been able to do in the past.”

The survey is part of a 21-month effort, started last fall, to gather feedback from members in all settings of the church. In addition to the survey, UCC Board members and the Council of Conference Ministers are also weighing in on the proposed changes.

"After GS30, the UCCB stated that it would obtain input from our ministry partners on the Constitution and Bylaw changes not ratified," said Bonds. "With this survey, we are asking for you to give us that input. Please know your feedback is extremely important us, so let us hear from you. What you say will help us formulate any changes brought to General Synod in 2017.  Thank you for your consideration."