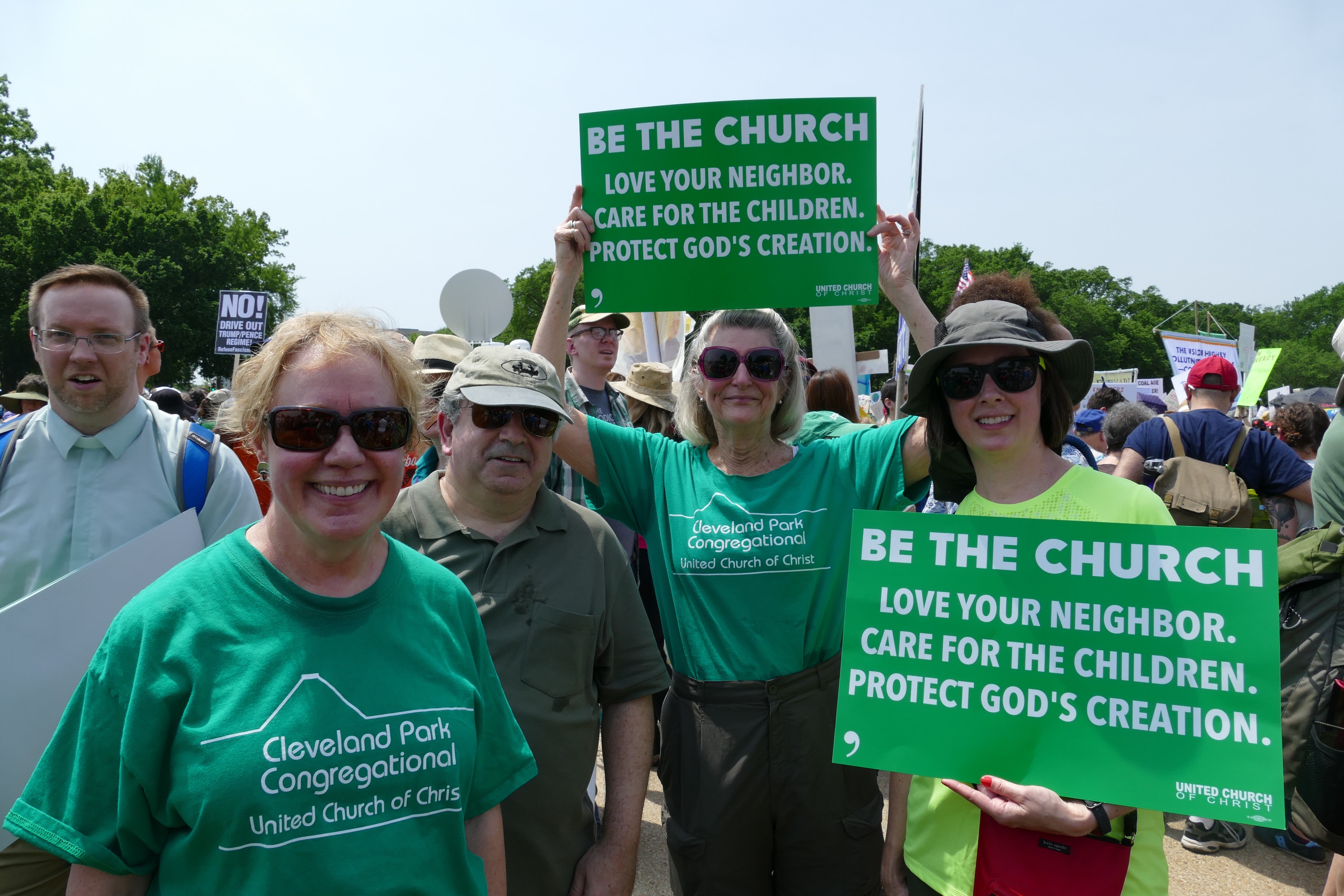 On President Trump's 100th day in office, 200,000 people from all walks of life ringed the White House to send him a message about climate change.

The United Church of Christ, as one of the official co-sponsors of the People's Climate March, was well-represented. Scores of advocates from several UCC Washington D.C.-area churches were joined by dozens of others who converged on the Capitol from congregations across the country.

"This is a tipping point in the age of our climate and in the movement for renewable energy," said Hope Harle-Mould, who came from Buffalo, N.Y., and Pilgrim-St. Luke's & El Nuevo Camino UCC. "As stewards of the creator we have to be here, leading our leaders."

They gathered on a record-setting 90+ degree day in the blazing April sunshine on the National Mall after an ecumenical prayer service at the Lutheran Church of the Reformation, an all solar and wind powered facility, just steps away from the U.S. Supreme Court.

"I've been involved in environmental justice issues for a long time," said Ina Isobe, a member of Union Congregational in Montclair, N.J. "It seems more urgent now than ever."

Along Pennsylvania Avenue, led by the indigenous peoples, 'Protectors of Justice,' 'Creators of Sanctuary,' 'Builders of Democracy,' 'Guardians of the Future' all assembled. While the UCC marchers could be part of any of those groups, they lined up with other 'Keepers of the Faith' for the 2.7 mile trek from the United States Capitol Building to the White House. 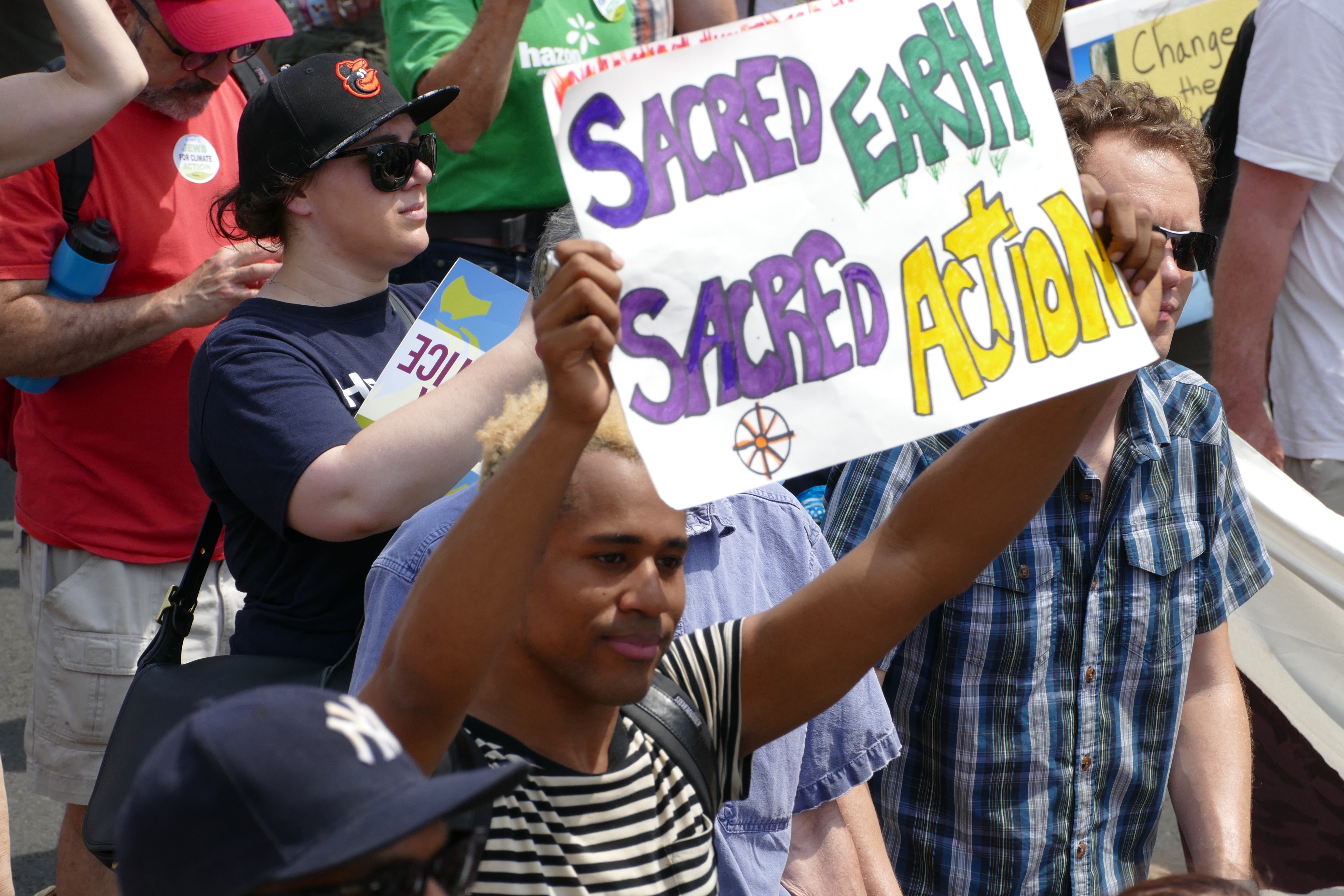 "It was just outstanding," said the Rev. Art Brown, adjunct minister, Plymouth Congregational United Church of Christ in Northwest D.C., of the magnitude of the crowd, which spanned several blocks and overflowed the streets. "D.C. is having back-to-back home runs with the Women's March, the Science March and the Climate March. It has opened the eyes of thousands of people. People are galvanizing, making connections, using each other's strengths, accepting each other's differences and using those differences for social justice."

The UCC contingent, led by the Rev. Brooks Berndt, minister for environmental justice, and the Rev. Jim Antal, president and conference minister of the Massachusetts Conference, also included former General Minister and President the Rev. Geoffrey Black, Sandy Sorensen, director of the UCC D.C. Office, and the Rev. Alex Vishio, social justice minister for the Central Atlantic Conference. Area churches, Rock Spring UCC in Arlington, Va., Westmoreland Congregational in Bethesda, Md., and Plymouth Congregational and Cleveland Park UCC in the District of Columbia all showed up. North Carolina churches sent a number of activists and two retired UCC pastors, the Rev. Andrea Ayvazian and the Rev. Peter Ives, biked down with other cyclists from Massachusetts.

Saying he was heartened to see that so many came from all across the U.S., Harle-Mould noted that the faith contingent, with people from several Christian communities, Jewish, Buddhists, Hindus, and Pagans, was very visible.

"The Earth is God's body and the ground of our sacredness and being," said the Rev. Lianne Tigert, a pastoral counselor and chaplain from Concord, New Hampshire. "If we can't tend to the earth with love, compassion and justice, I don't know how we tend to each other."

Tend to the earth, fight against global warming. Here are some tips from the People's Climate Movement.

Drive a more fuel efficient vehicle.
Reduce the distance you drive.
Keep your tires inflated to the recommended air pressure.
Cut down driving over 70 mph. The same goes for “aggressive” driving, which uses more gas.
Fly 10 percent less.
Turn down your thermostat by three degrees for eight hours a day in winter.
Replace at least one out of five incandescent light bulbs with LEDs.
Reduce meat consumption, and eat less overall.
Cut the amount of discarded food.