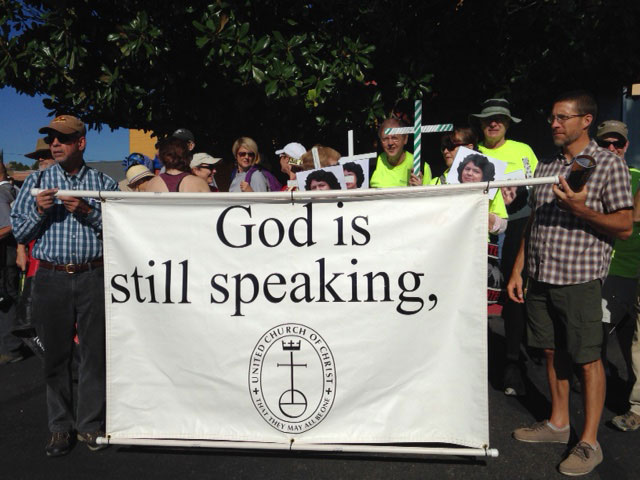 Keep on moving forward. No wall can divide us. We are never turning back.

The push for humane immigration reform brought veterans, advocates, clergy and people of faith to the border wall dividing the Nogales, Arizona, and Mexico communities on Saturday, Oct. 8, as part of a joint rally calling for a new model of border justice that builds bridges and relationships instead of walls and policies that create fear and division.

"In an election season where immigrants are pawns on a chessboard and talked about in shame, we are here to demonstrate our love for all people and our commitment to immigrant justice that makes sense," said the Rev. John C. Dorhauer, UCC general minister and president. "Something has to change — and until it does we will continue to demonstrate for peace and love as those who follow Jesus."

The Southwest Conference United Church of Christ built several days of education and action on immigration and border militarization around the School of the Americas Watch Convergence at the Border in Nogales Oct. 7-10. Dozens of UCC participants from across Arizona and around the country converged in Southwest Arizona beginning Wed. Oct 5. Issues of border justice, migrant dignity, and the root causes of migration were all topics of discussion. Calls to stop the raids, end the detention and mistreatment of migrants have been heard loud and clear. 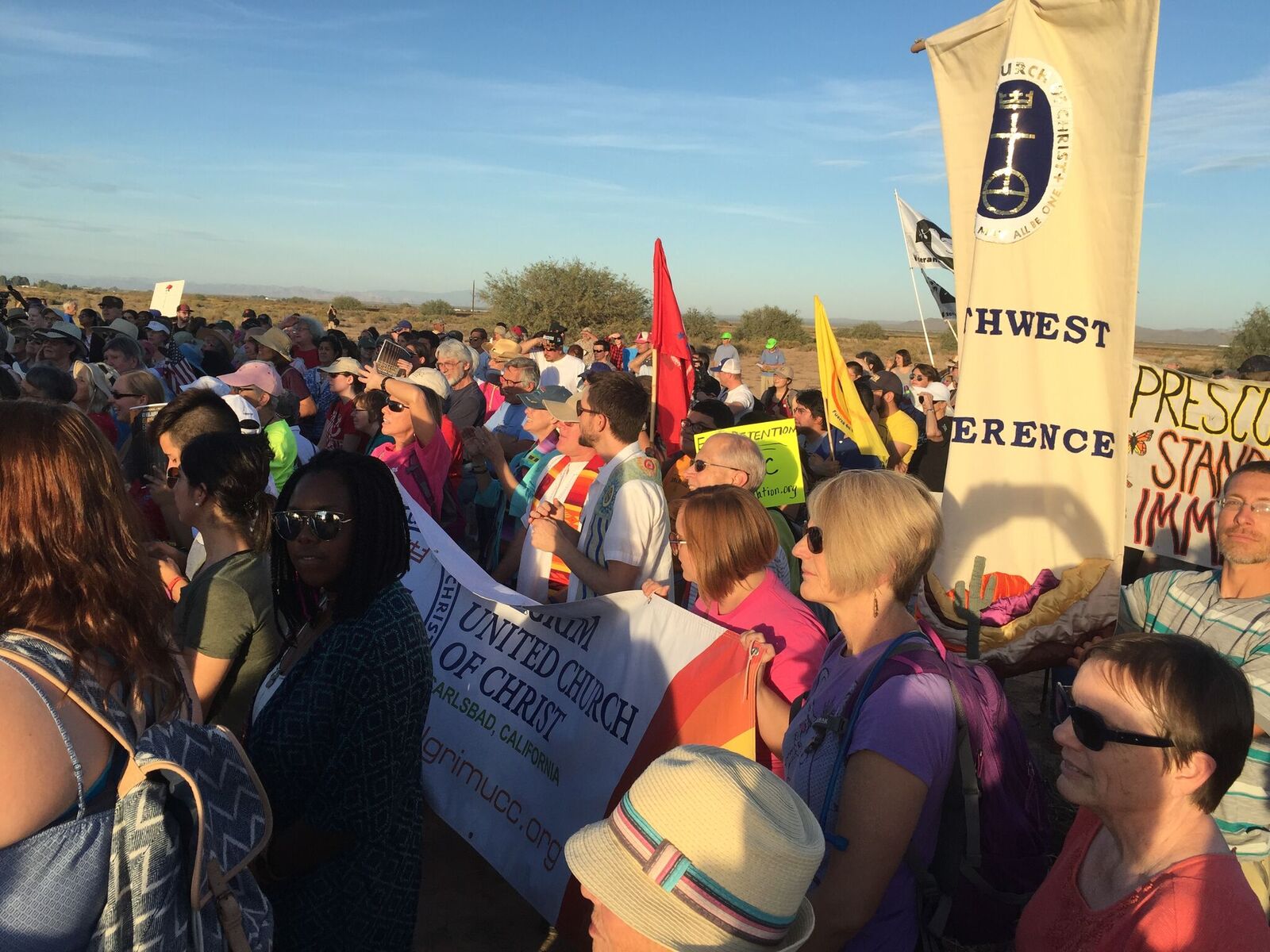 At Eloy Detention Center, south of Phoenix, 350 demonstrators, 35-40 from the UCC, voiced that call in an evening vigil Friday, gathering just outside the facility. Three UCC clergy, joined by a Unitarian Universalist minister, led the group in prayer, and the crowd spent some time singing and chanting. They heard testimonies from people who had been held inside. After dark, the detainees in the cells affirmed the support of the people standing in solidarity with them outside.

"It was a powerful moment," said the Rev. Bill Lyons, conference minister, Southwest Conference UCC. "We lined the streets outside the prison holding candles and were acknowledged by the detainees who used blankets, covering the windows, to flash their lights at us."

"There was a lot of excitement in the group," said Mike Buttram, who works with youth at the United Church of Sante Fe. "But the gravity of the situation was recognized by everybody."

On Saturday morning, starting at the Americana Hotel in Nogales, about 70 UCC participants from Arizona, California, Colorado, Illinois, Minnesota, New York, Ohio, and Oregon joined 700 other advocates marching more than a mile to the border in the blazing morning sun. Led by veterans, the march ended at a rally with stages set up on both sides of the wall dividing the U.S. and Mexico. The program alternated between the U.S. stage to the Mexico stage, each group addressing the entire crowd. 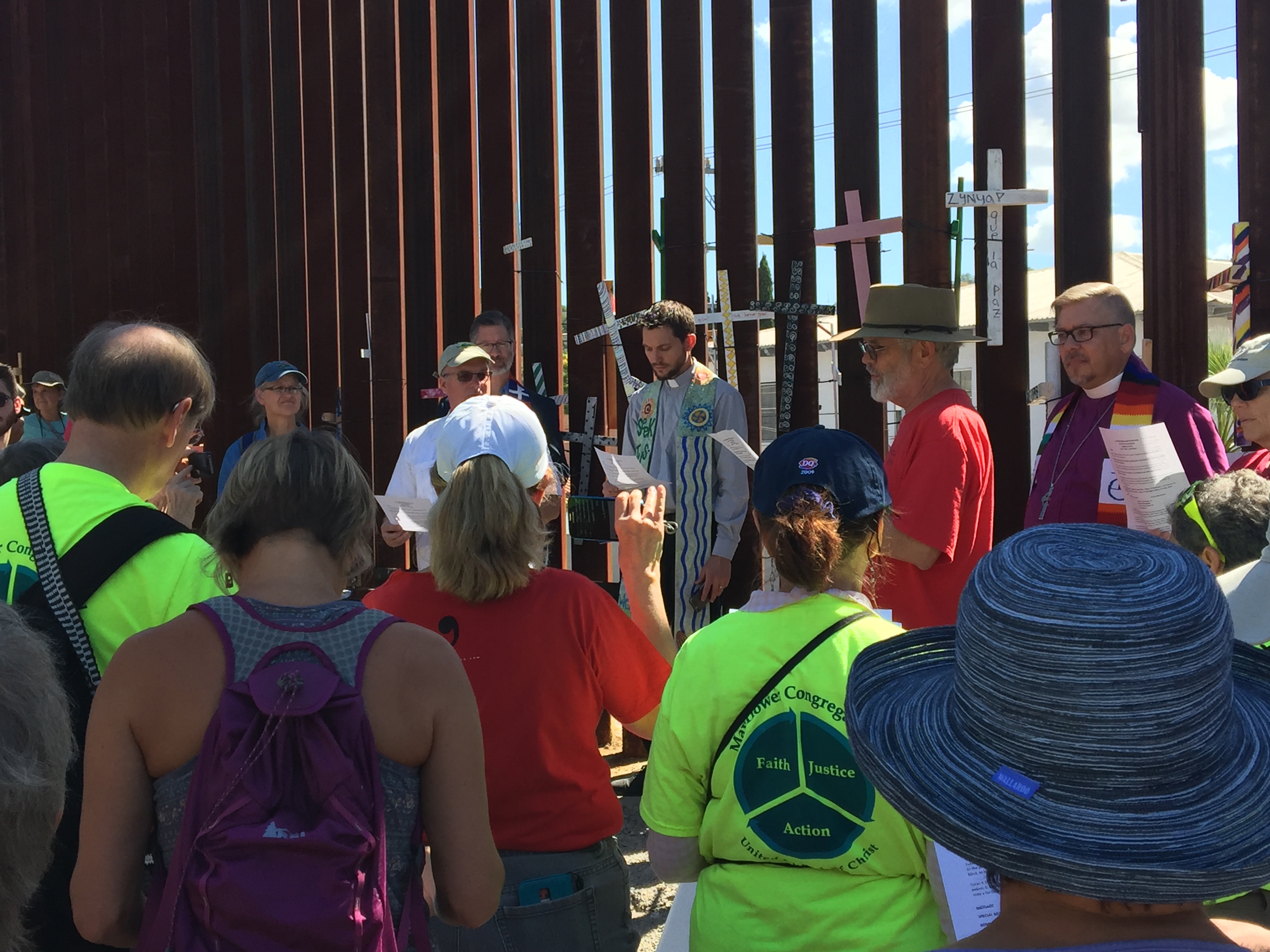 The retired Rev. Bob West and his wife Louise, members of Washington Park UCC, came from Colorado. "This is important," Louise said. "I taught in Denver at a school that was 86% Latino. My best students in school were without papers and it was extremely hard to get them into college. I'm here for those students."

Scott Rowe, a 17-year old from Shadow Rock UCC in Phoenix, was one of the youngest denominational attendees at the event. "I'm friends with youth leaders in the UCC who are very involved in social justice," he said. "I'm here representing them."

The refugees were also represented. "Our way of life is most of the cause of why people are arriving here, fleeing the violence in Central America," said the Rev. Randy Mayer, pastor of Good Shepherd UCC in Sahuarita and one of the organizers of the UCC event. "We have to have a role in trying to support these families."

Rebecca Glenn, moderator of the Southwest Conference and one of 10 members of Scottsdale UCC in attendance, said she was was compelled to participate. "This is the first time I've engaged in any kind of action on the border. I'm concerned with the rhetoric of 'othering people'. It divides us — it's time for me to do my part."

The Rev. Noel Andersen, who leads the UCC Collaborative on Immigration and is an organizer for immigrant rights for Church World Service, cited the need to push back on border militarization, which pushes people into the desert and results in many deaths. "The crucifixion is a good metaphor for border militarization and the construction of the wall because it forces migrants into the desert where many meet a perilous fate."

To honor those who perished in the desert hoping for a better life, the UCC group zip-tied wooden crosses to both sides of the border wall during a moving prayer vigil with communion Saturday afternoon, just steps from the rally stages.

The day of action and advocacy ended Saturday evening, again at the border wall, with an interfaith candlelight vigil of unity held on both sides of the border. It started with a traditional Aztec Native blessing of the four directions, using sacred smoke to purify space, body and spirit. Then a prayer "that one day the love we carry in our hearts will matter more than the documents we carry in our hands."

In his message, Mohyeddin Abdulaziz cited one of his favorite passages in the Quran saying, "The Creator could have created us all the same, but chose to do otherwise to give us a chance to know each other, discover each other, and love each other. That is not happening here. We have to do whatever we can to end the occupation of our borders."

"This wall speaks truth," Dorhauer told the crowd, referring to the barriers facing non-whites in America.  "As long as the wall is standing, the story of America as the home of the free remains a lie. We need to tear down the wall and live out the dream of the America that was meant to be."