UCC advocates arrested in St. Louis speaking out on behalf of their neighbors 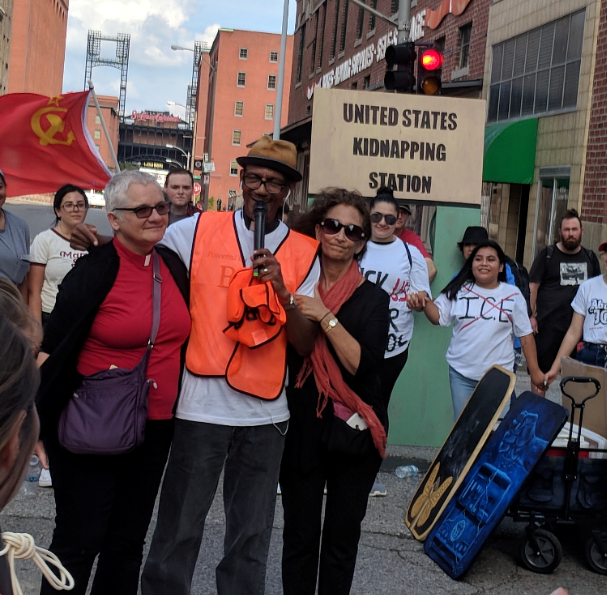 Several United Church of Christ clergy and lay leaders were arrested during an interfaith call for justice outside the Federal Building in St. Louis, Mo., on Thursday. Six UCC ministers and six UCC activists were in a group of twenty people taken into police custody on July 19, while attempting to advocate for their neighbors who have been threatened by our country's immigration policies.

The group was bringing demands for justice from the local Latinx community to the Offices of Immigration and Customs Enforcement.

"When our local community of immigrants asked for clergy support, I knew I needed to stand in support of their demands for justice," said the Rev. Rebecca Turner, pastor of Christ Church, UCC, after her arrest. Her congregation, in the St. Louis suburb of Maplewood, is offering Sanctuary to Alex Garcia, an immigrant from Honduras who has lived at the church for almost a year. One of the group's demands calls for a stay of removal for Garcia, to keep him from being separated from his wife and five children, all American citizens.

The Rev. Tyler Connoley, Minister for Search and Call Discernment in the Missouri Mid-South Conference, said, "It mattered to me that we were amplifying the voices of those who aren't being heard. The demands we carried were not our demands, but those of our siblings who are most affected." 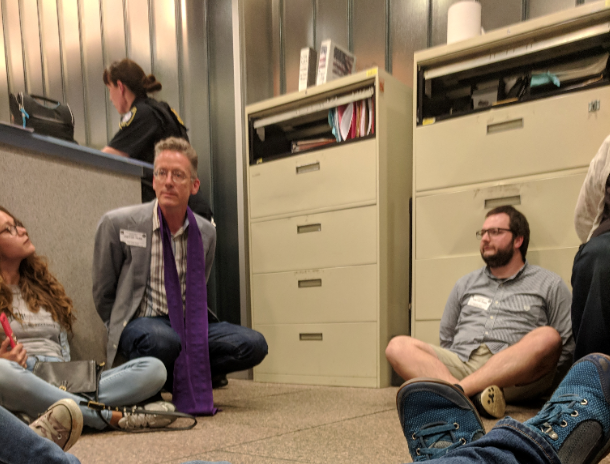 The twenty were charged with making a disturbing noise and with being a nuisance. Turner said, "Being arrested for making noise is a small thing compared to the suffering of our neighbors. We all need to make more noise." Connoley pointed out that "when people who are being oppressed have their voices heard, those in power always think it's a nuisance and disturbing."

"The Bible is very clear that we are to treat those who arrive from other places exactly as we treat our own families," Turner emphasized. "The criminalization and harassment of immigrants must end. Policy should be just and reflect Christ's compassion, while keeping families together and honoring human dignity."

Besides Turner and Connoley, other UCC clergy arrested were the Revs. Mary Albert, Katherine HawkerSelf and Janice Edwards Barnes, who all retired from serving churches in St. Louis area. The UCC laity arrested – Noah McCarn, a Member in Discernment, Jan Roddy, Virginia Kelly, and Dawna Williams – all attend churches in the St. Louis Association.