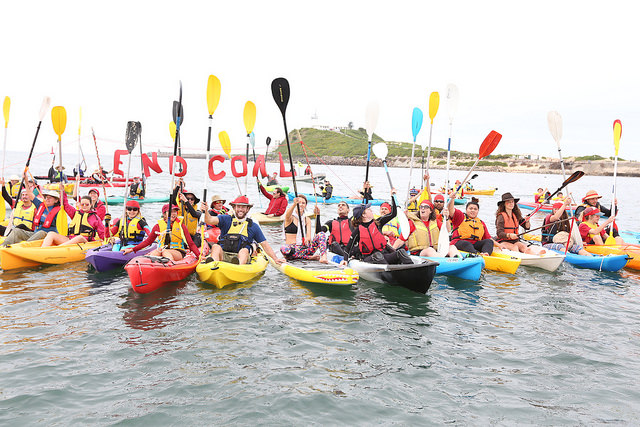 More than 2,000 people shut down the world's largest coal port in Australia. For six hours, no coal came in or out of the Port of Newcastle as kayakers blocked the harbor's entrance to any entering or exiting coal ships, while others blocked access to the only coal transport train line into the port.

A global wave of peaceful protests over the course of 12 days is uniting climate activists in the largest civil disobedience in the history of the environmental movement. "Break Free" is taking place across six continents, targeting the world’s most dangerous fossil fuel projects. In the United States, advocates of the United Church of Christ will be joining rallies in Washington, D.C., Los Angeles, and the Chicago area illustrating that environmental justice is an integral part of the denomination's DNA.

The UCC is a sponsor of the movement that aims to keep oil, coal and gas in the ground. Spearheaded by international environmental organization 350.org, "Break Free" launched a website in early December, and by February, more than 13,000 people from 150 countries committed to participate in rallies and peaceful protests from May 3 to May 15.

"Whether it is the water we drink or the air we breathe, whether it is the rising sea levels threatening our coastal cities or the droughts threatening our inland farms, our country is increasingly experiencing a moment of reckoning," said the Rev. Brooks Berndt, UCC minister for environmental justice. "I believe that what our church is doing today is exactly the kind of action that is needed now."

Berndt and the Rev. Graylan Hagler, who pastors Plymouth Congregational UCC in the nation’s capital, are commissioning a group that will be part of a Sunday, May 15 rally, where 1,000 people will call on the White House to end of offshore drilling in the Arctic and the Gulf Coast.

"People find voices of faith to be the most compelling in understanding the damage done to our climate," Berndt said. "When we commission someone, we are saying that this is a special and vitally needed ministry. This is a ministry to be encouraged and lifted up. This is a ministry to be consecrated and celebrated."
"Break Free" rallies and protests are planned for six specific locations in the United States, in addition to 10 actions that have already taken place around the world. UCC climate activists in other parts of the country are playing a key role in the week’s events.

The Rev. Timothy Murphy, a minister with dual standing in the Christian Church (Disciples of Christ) and UCC, is the executive director of a multi-denominational organization, Progressive Christians Uniting, which is a co-sponsor of a "Break Free from Fossil Fuels" rally and march in downtown Los Angeles on Saturday, May 14. With about 1,500 to 2,000 participants expected, the three-hour event starts outside city hall, with remarks expected from climate activists Bill McKibben and Tom Steyer. 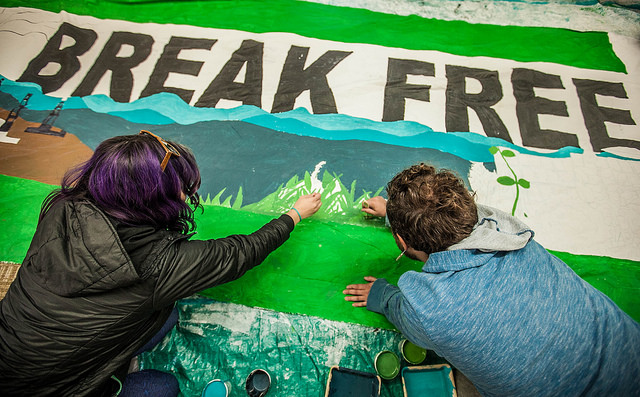 "We will march on a predesignated route in downtown L.A., highlighting the need for protecting public health and the dangers of urban oil drilling — especially for people of color," Murphy said. "We believe we have the capacity to move to a 100 percent clean-energy future. We just need the will, which this march is meant to help galvanize."

Murphy explained that Progressive Christians Uniting recognizes that addressing climate disruption is a key task of faithfulness to the gospel. "As most Christians around the world would agree, it's a sin to profit off of the desecration of the planet at the expense of the poor and oppressed," he said. "We’ve offered small group trainings using a resource we have created on climate change and faith, promoted divestment from fossil fuels, spoken out to church groups, attended other rallies and vigils, and partnered with groups like SoCal350 — a chapter of 350.org — and environmental justice communities to offer a faith witness to this crisis. L.A. is the epicenter of urban oil drilling in the U.S., so if we can change that here, it can be changed anywhere."

The Rev. Terry Gallagher chairs the recently-formed Environmental Task Force of the Illinois Conference of the UCC, which has been engaging the conference’s congregations in climate justice. While he says that the conference is late to the movement away from fossil fuels, a small group will take part in the Sunday rally with about 1,000 people at the Whiting Lakefront Park, near a BP refinery and near the 2014 oil spill into the waters of Lake Michigan, to protest expansion of tar sands pipeline.

"We will be there as a witness that people of faith can indeed be a vital element in this process," Gallagher said. "We will also be there to learn, to grow and to take these valuable lessons back to the faith communities of the Illinois Conference."

During other "Break Free" rallies, 10,000 people in the Philippines gathered May 4 to demand an end to coal, and thousands of people shut down the world's largest coal port in Australia on May 8, using kayaks and small boats to blockade the rail line to the port, and hanging from coal loaders to shut down work for the entire day.

See a full schedule of action around the planet and learn more about the Break Free movement on its website.