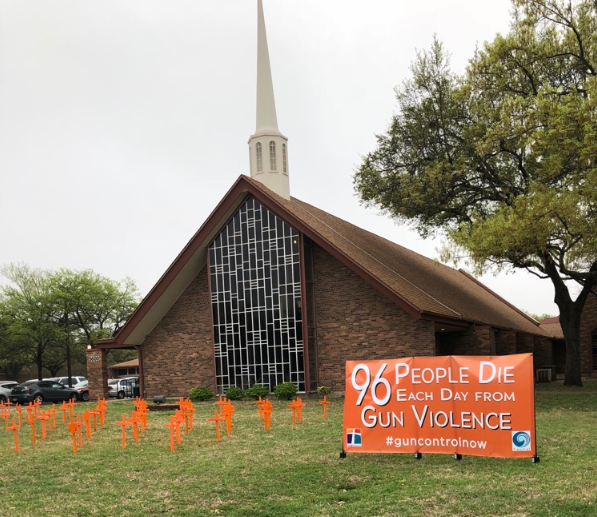 A stark display outside a Dallas, Texas church, one which makes tangible statement against gun violence, has helped unite two UCC congregations in social justice and in worship.

Rows of Christian crosses, Jewish Stars of David and Muslim Stars and Moons are planted in front the lawn of Central Congregational UCC. They went up at the suggestion of New Church, a UCC congregation which has been 'nesting' in Central's building.

"I have been the lead pastor of Central for almost two years, and in that time I have grown weary of offering 'thoughts and prayers' after each of the many episodes of mass shooting, and had articulated that to our congregation," said the Rev. Ray Jordan. "I was literally praying for a way to do more, not quite knowing what. So, it was an answer to prayer when Jo and New Church suggested using Central's prime location on a busy street for a social justice witness."

"New Church came up with the idea following the Las Vegas shooting, but took some time to think about what the display might look like, what the cost would be and talk with Central to see if they would allow the display on their property," said New Church pastor, the Rev. Jo Hudson. "During Lent we did a sermon series, The Last Week, based on the book of the same title by Borg and Crossan. We learned that Jesus' turning of the tables was really a symbolic justice action and that knowledge revived our interest in the display. Then the shooting in Parkland, Fla., took place and we were convinced we needed to act." 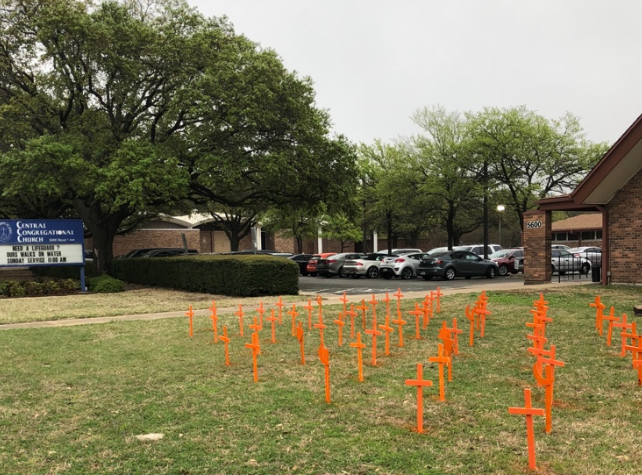 With the permission of the Central church council, members of New Church bought supplies, created the crosses, stars and moons, and erected the display on Friday, March 23.

"We talked about and agreed upon this witness before the first of the year, however after the high school shooting in Parkland it became imperative that we stand with the students of Parkland; therefore the witness went up on the eve of the March for Our Lives," Jordan said. "Later, Jo and I discussed and decided it should stay up through the NRA convention."

"We determined that we did not want to make a statement about the Second Amendment or gun ownership, because many of us believe in both, though most of us would like to see reasonable gun laws enacted," Hudson said. "Essentially we wanted to raise awareness about gun violence and how it impacts our nation. So our sign reads: Every day in the United States on average 96 people die from gun violence."

The display, recently the subject of a column in The Dallas Morning News on the eve of the NRA Convention, held May 4-6 in Dallas, has raised eyebrows, spurred conversation, and sparked feedback.

"A couple of patrons of the public library next door have stopped in to show their appreciation and a few members of my congregation disagreed because they thought it was too political— although our council voted unanimously to have it," Jordan said. "However, after the news story, the outpouring of support has been positive, without exception, from neighbors and friends."

It also forged a tighter relationship between the people of Central and New Church. That congregation, established as a new church start in 2014, found themselves without a place to worship last year just before Memorial Day when they suddenly lost their lease in on office building in North Dallas. Pastor Jordan and Central, Hudson said, offered New Church an extravagant welcome. "Central has often hosted other congregations in their space and their Council said, 'Come on, we'll figure out the details as we go.'"

Details, as the two pastors announced Sunday, May 6, that the two churches will continue to figure out together as they go.

"Beginning the first Sunday in June we will try worshiping together at 11:00am on Sunday mornings under the guidance of a joint worship team, and will later begin discussions about the possibility of uniting," Hudson said. "We see our collaboration on the Gun Violence Social Justice Display (as well as a shared Christmas Eve worship service and shared Holy Week services) helped us move toward this hope of uniting. Once again, Central Congregational Church in their generosity toward New Church has not only welcomed us but now are graciously saying, 'Come on, let's try worshipping together and see where the Spirit takes us.'"