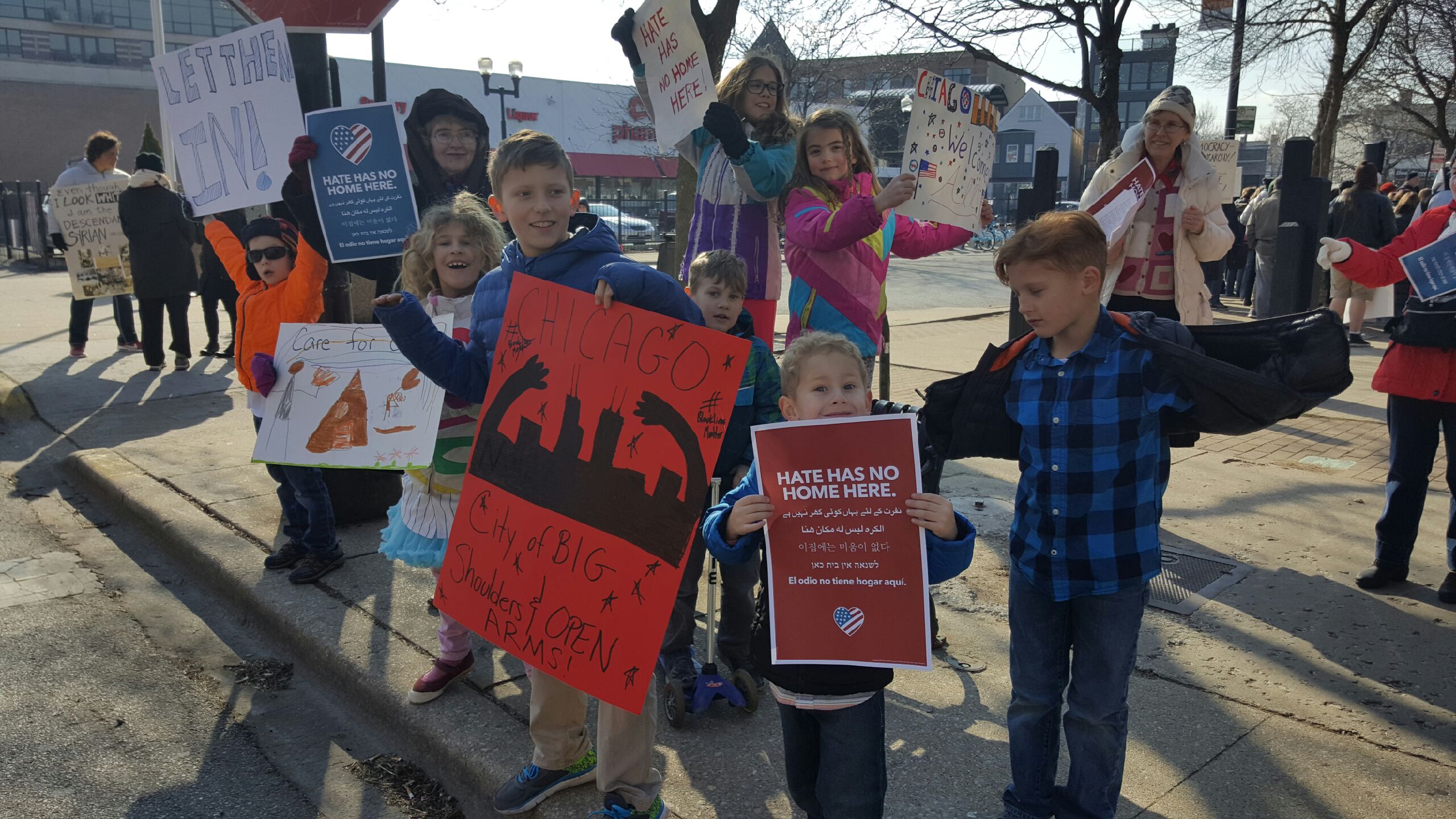 Both are United Church of Christ congregations in Chicago, separated by just a few miles. Epiphany UCC, in North Center, west of Wrigley Field. St. Paul's UCC in Lincoln Park. Both embraced the same mission in 2016: to welcome the stranger. Both congregations have spent many hours over several months immersed in preparations to help a Syrian refugee family find a new life in the United States. Today, while St. Pauls is engaged in assisting a family of six, with children ages 10-19, assimilate into their new community, Epiphany is trying to determine what do with a fully furnished rented apartment that its family of four may never see. First stopped from coming to the U.S. by the 'extreme vetting' order signed by President Trump, and now in limbo because of the uncertainty surrounding the block on that order by a federal judge in Seattle. Dad, mom and their two sons should have been arriving today. 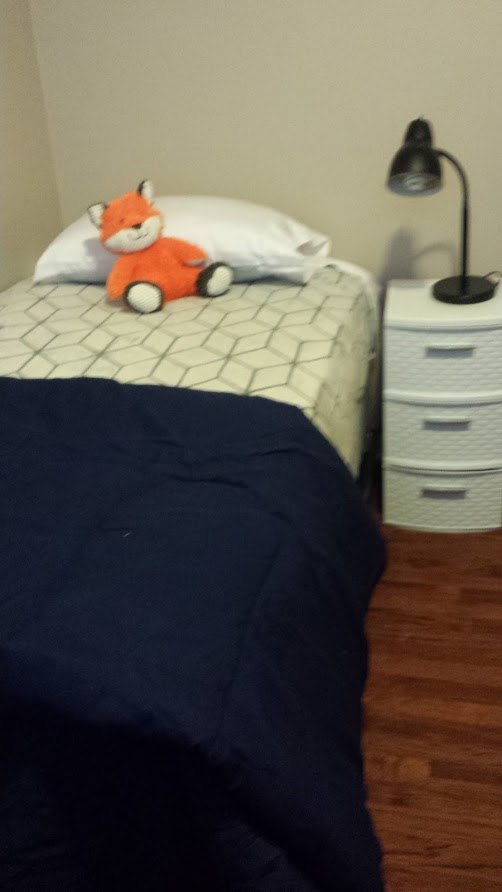 "We began talking about the idea of sponsoring a Syrian family nine months ago in light of the toxic rhetoric from Trump and others about Muslims," said the Rev. Kevin McLemore, Epiphany's pastor. "I was born in Singapore, and lived in Indonesia, a Muslim country, until I was about 11 because my father worked in the oil business.  Like many in the congregation, it felt personal for me, and we wanted to take a stand against such bigotry by living out our Christian faith through welcoming a Muslim family into Chicago."

Two boys and their parents fled Syria in 2013 and had lived in Jordan and Turkey. They were scheduled to arrive in Chicago on Feb. 6. Their trip was cancelled at almost the absolute last minute by Trump's edict.

"The family was right on the verge of getting here," said the Rev. John Thomas, former UCC general minister and president and member of the Epiphany congregation. "They should have been here in the middle of January, but their trip was rescheduled two or three times. Because the family is from Syria we may never see them here. There's a lot of disappointment in the congregation. There was great energy around this . . .  and now.."

After numerous volunteer meetings and trainings, and a new home readied with a stocked pantry, a furnished living room and neatly made beds, one topped with a teddy bear intended for the 10-year old, the Epiphany folks are not sure what will happen next.

"The congregation has a lot of volunteer teams," Thomas said. "The literary team, the move-in team. I was going to be one of four people who would go in and check in on them, to make sure they had what they needed, that everything was ok in the apartment. Not even sure what the family's conditions are now. It must be just devastating for them." 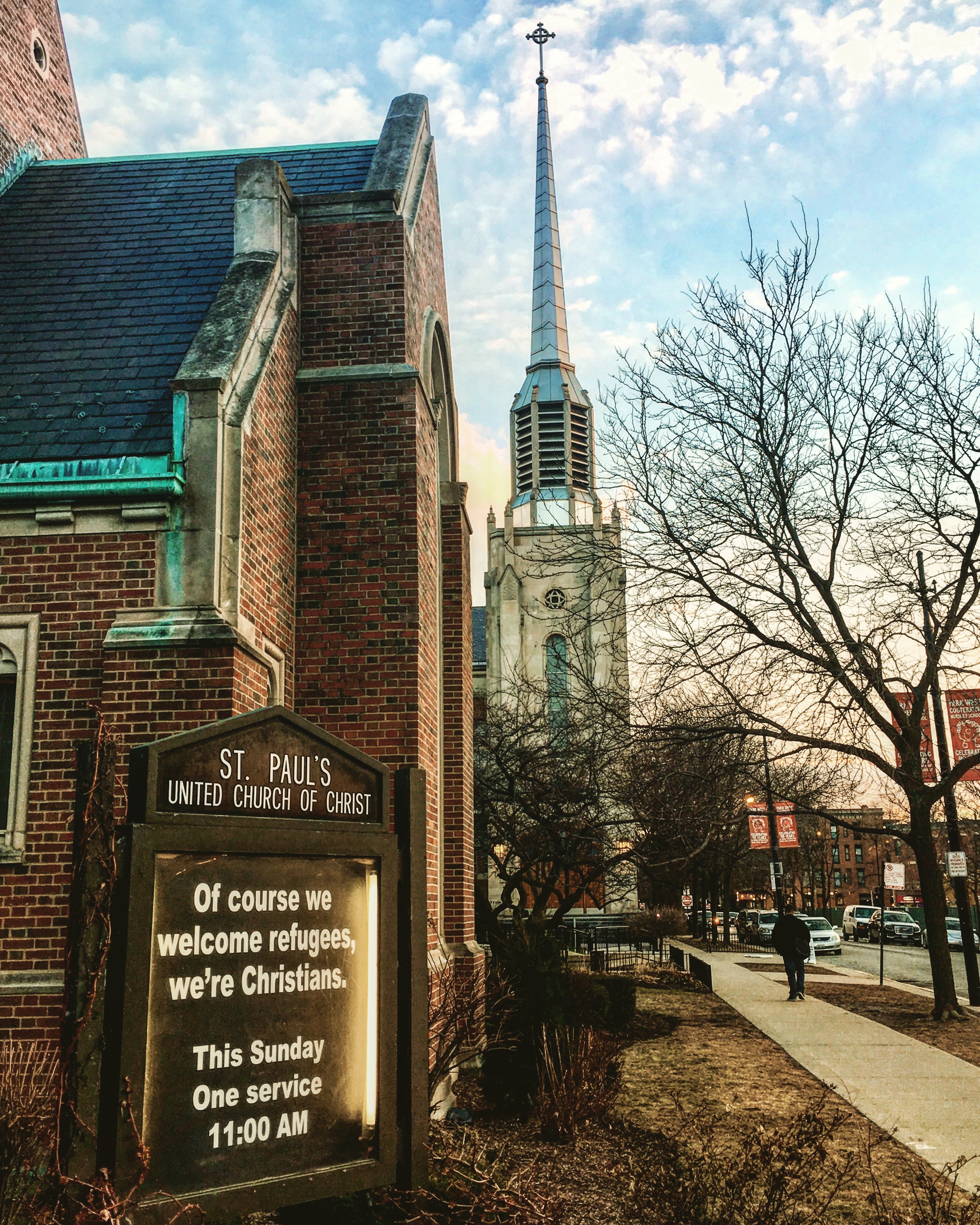 Diane Witkowski also has a heavy heart. She has worked as office manager at Epiphany for eleven years, and has been worshipping at St. Pauls for more than twenty five. In the last year around refugee resettlement, Diane has witnessed both extreme disappointment and tremendous satisfaction. Foiled efforts and joyous milestones.

"Many, many people at Epiphany UCC and St. Pauls UCC have worked so hard to bring families fleeing Syria to Chicago," she said. "The family that arrived safely at St. Pauls several months ago is settling in, going to school, learning English, looking for work. And the family that was to arrive at Epiphany UCC (after two delays) Feb. 6 did not make it. This is such a heartbreaking situation for all those involved. I can't imagine how the family left behind must feel, the devastating fact that they are still in limbo with no idea what the future will bring. And the heartache felt by everyone at both churches - because the church's mission is not complete."

Both congregations have worked with Refugee One in Chicago to fulfill their quest to bring vulnerable people out of turmoil and help them find a new way of life. The mission at St. Pauls is further along, but it too has not been easy.

"Because so many refugee families come to the U.S. from chaos, our effort to host a family had many fitful starts," said the Rev. Matt Fitzgerald, pastor at St. Pauls UCC. "Over the past year, on at least three occasions Saint Pauls was ready to welcome a family, only to have it fall through at the last minute. Each time our hearts ached to think about a family stranded in crisis. Now, having grown to love our family we are assisting, we feel even more deeply for the family Epiphany was ready to host. And we empathize with our friends at Epiphany. How frustrating to have a Christian practice as essential and biblical as hospitality stymied by the federal government. Outrageous!" 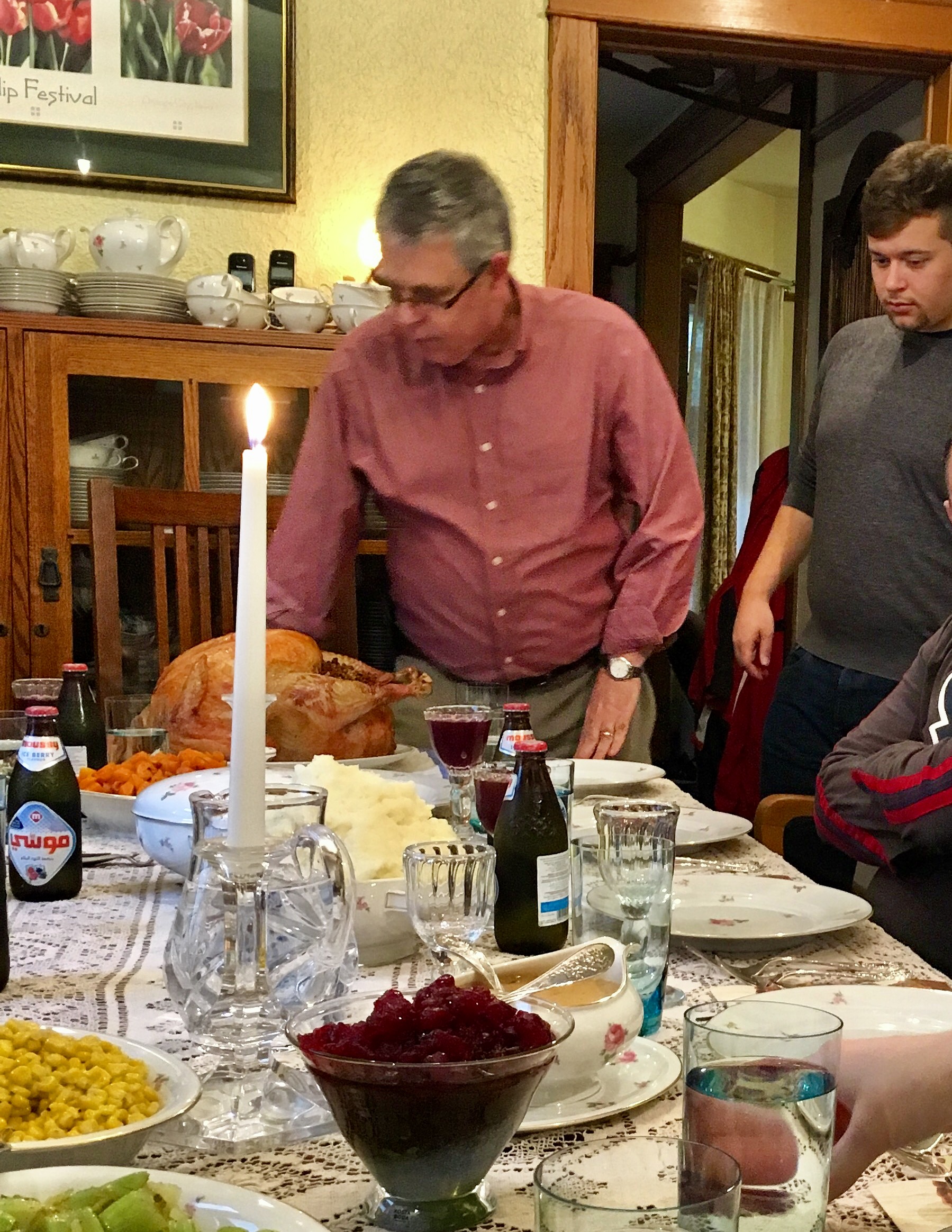 St. Pauls furnished the apartment for the family of six, welcomed them at the airport, provided meals, stocked their fridge and pantry, supplied clothing and other essentials. Church members have thrown them parties, invited them to their homes for Thanksgiving dinner. And the newly settled family hosted a Syrian feast at their apartment for many of their new church friends.

"The father is a carpenter," Fitzgerald said. "He's finding it difficult to find work as that field and its unions are a closed circle in Chicago - and his limited English is a drawback. Church members have hired him to do various jobs. The mother is working at O'Hare airport, cleaning planes." She started her job just last week.

"Refugee One very much wants their clients to find self-sufficiency quickly - so any help that could lead to reliance, or slow down a family's assimilation or employment is strongly discouraged," Fitzgerald noted. "Needless to say, we've strained against this rule, even though we understand it."

"This has been a beautiful experience for Saint Pauls," he continued. "Founded by German immigrants 175 years ago, and repopulated by German immigrants after World War II, we still understand ourselves as an immigrant church." The church is a spiritual home to members who have emigrated from countries around the world as well those who have moved to Chicago from other places in the U.S. 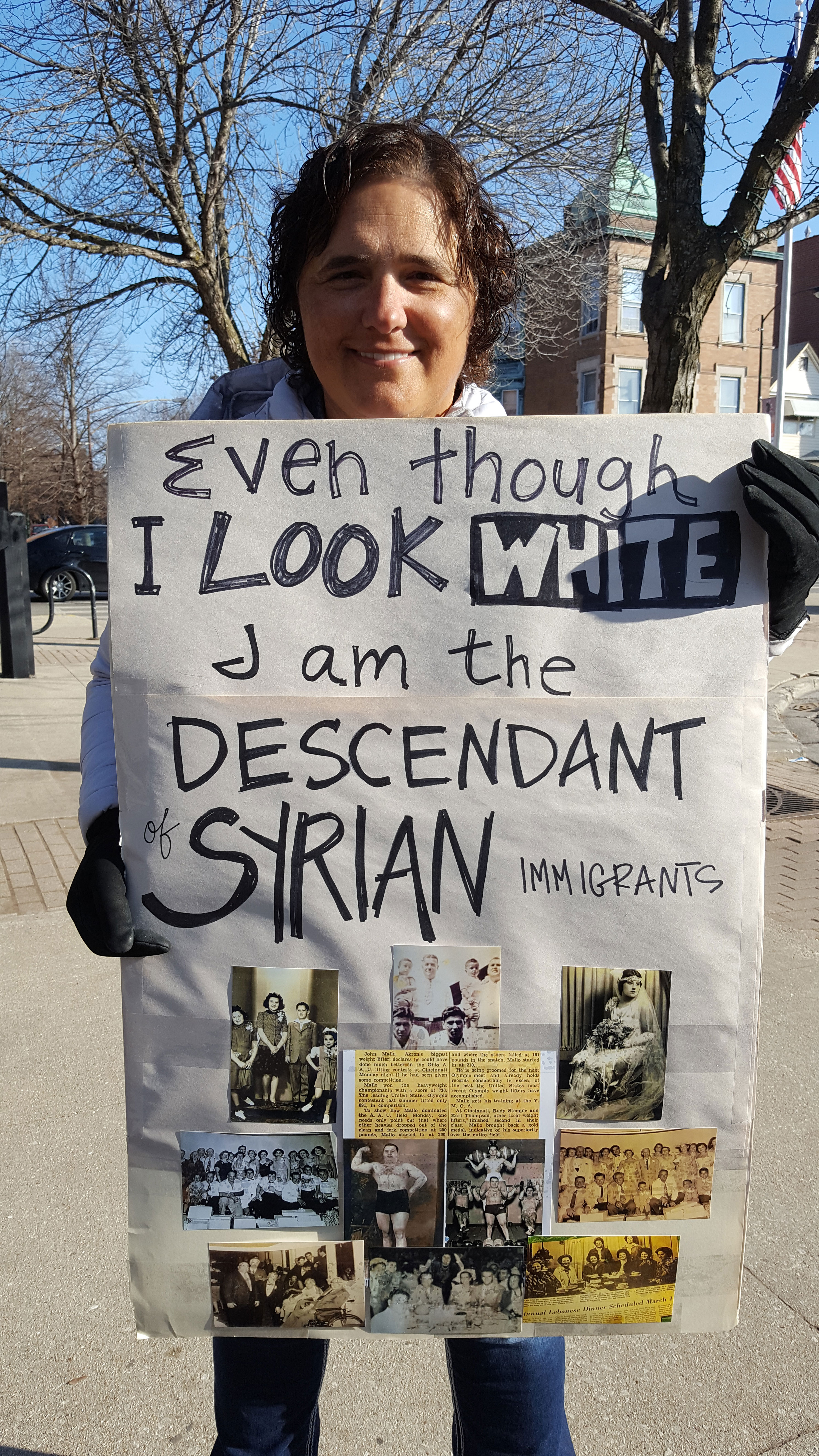 "The people of Saint Pauls know what it is to be 'a stranger in a strange land,'" said Fitzgerald. "Therefore, our church has a strong, clear, continually rewarding spirit of hospitality. Welcoming a Syrian family felt like an extension of who we are, rather than a new direction or a risk. Our simple act of Christian hospitality looks bold because of President Trump's anti-Christian executive order. In a time like this, all the church has to do is be the church for our light to shine brightly."

"The horror of this whole Trump order is that it carves out an exception for Christians and other religious minorities in those countries, prioritizing one group of people in desperate need over another group in the same desperate need," said McLemore. "Muslim lives are as valuable to God - and us - as Christian lives."

Both congregations have been pretty public about their opposition to the administration's restrictions on refugee resettlement, joining the demonstrations at O'Hare Airport and mobilizing in interfaith strategy sessions in the Chicago area. The big question for churches committed to offering assistance and for organizations like Refugee One is: what happens next?

"That is a big question for us," said McLemore, "where do we got with this grief and anger?  Some of us were at O'Hare airport last weekend, others will be joining protests in the future, and the local interfaith clergy in our ward are thinking of ways to respond to this outrage."

On Sunday, Feb. 5, and interfaith response: about 200 people representing five different faith traditions took part in a neighborhood prayer service and rally that Epiphany church organized as a show of solidarity with others seeking safety in the United States.

"It makes me sick to see our political leaders posture as Christians," said Fitzgerald. "They think they're working against Islam. In and of itself that is horrible. What the President and his allies can't see, either because they don't know the most basic Christian tenets, or don't care about them, is that their fear of immigrants has prevented church-going Christians from living out our faith."