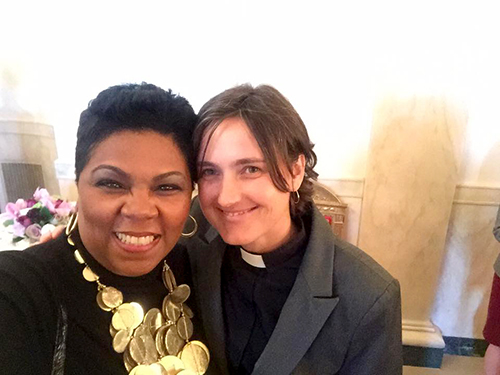 A trio of United Church of Christ ministers are in the nation’s capital to celebrate Eastertide with fellow religious leaders at the White House. The Rev. Traci Blackmon, the Rev. Chuck Currie and the Rev. Jasmine Beach-Ferrara attended the White House Easter Prayer Breakfast on March 30, the final such gathering before President Barack Obama leaves office.

Blackmon is the acting executive minister of UCC Justice and Witness Ministries and pastor of Christ the King UCC in Florissant, Mo., Currie is assistant professor, chaplain and director of the Center for Peace and Spirituality at Pacific University, and Beach-Ferrara is the founder and executive director of the Campaign for Southern Equality, an advocacy group working for full LGBT equality in the South. The White House Easter Prayer Breakfast has been an annual event since 2010 that welcomes faith leaders to reflect on the meaning of the holiday.

"It is a great honor to be invited back to the White House for this special occasion," said Currie, who first met Obama in 2007 when the then-senator was working on a bill to assist homeless veterans. Currie is a former member of the board of directors of the National Coalition for the Homeless. 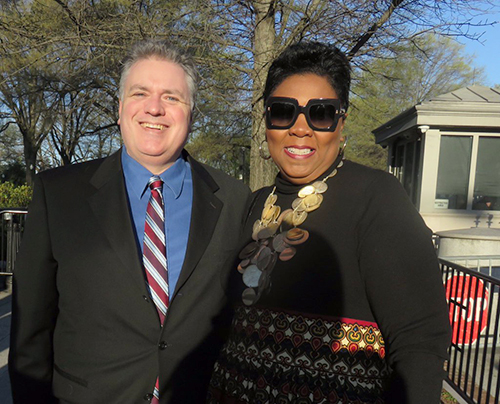 "I've deeply appreciated the honor of working with staff from the White House on a host of issues over the years and greeting President Obama in Oregon during most of his visits here," Currie said. "This president and his staff have been incredibly kind to allow me to offer advice, often unsolicited, on important policy issues that impact the common good of the United States."

Beach-Ferrara read from the Bible during the breakfast, reciting the Beatitudes from Jesus' Sermon on the Mount.

In January, Blackmon was appointed to the president’s Advisory Council on Faith-Based and Neighborhood Partnerships, a group of 15 individuals from across the faith community and charitable organizations to advise the Obama Administration on serving people in need.

"It was an honor to attend the last Easter Prayer breakfast of the Obama presidency," Blackmon said. "The racial, religious, and gender diversity evident at the Breakfast was a reminder that beloved community is attainable. And, as President Obama stated this morning, if Easter has any meaning it means we do not have to be afraid."

Currie was at the White House last fall for the ceremony welcoming Pope Francis to the United States. His first visit was during the 2009 holiday season. "This may be the last time I am ever invited to The White House," Currie said. "I'll look forward to continuing to work with the Obama Administration until President Obama leaves office in 2017. My hope is to continue to build on the relationships I've made with officials in Washington, D.C. to further efforts to equip students to work for peace and a more just world."