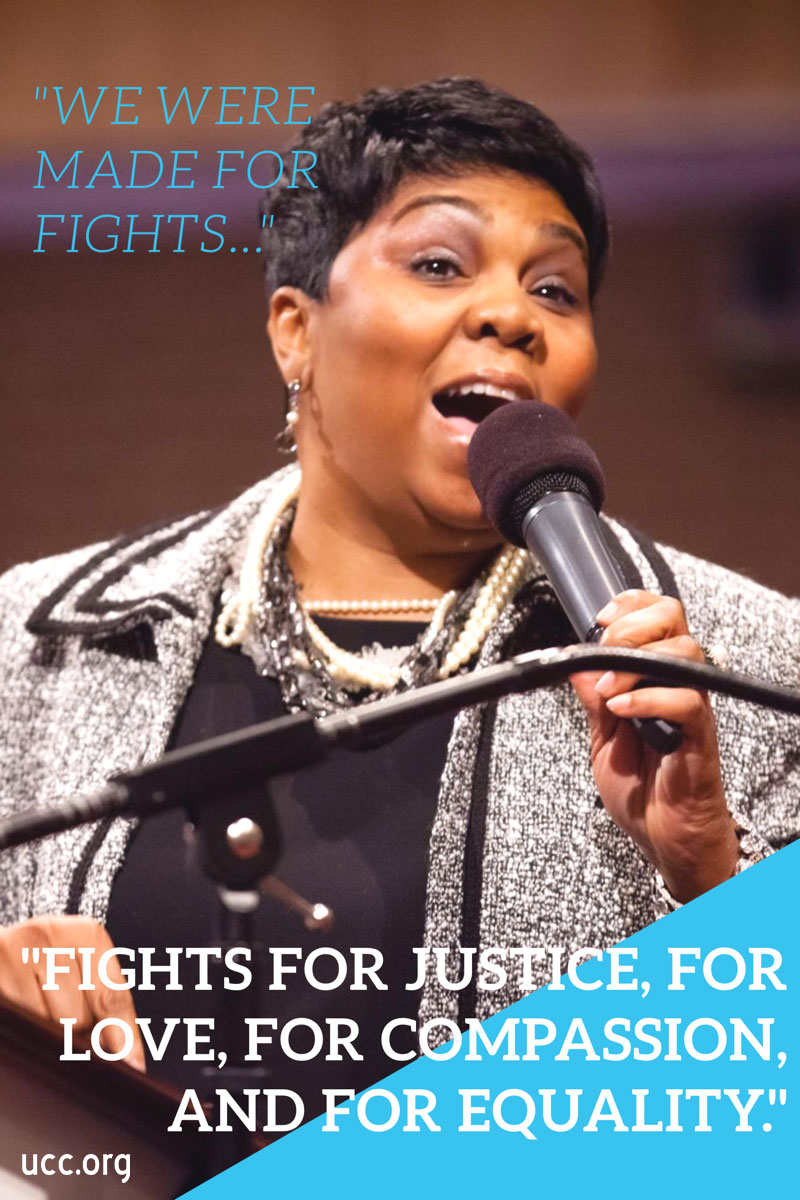 Standing before members of the United Church of Christ Board of Directors, just affirmed to continue serving as one of three national officers of the church, the Rev. Traci Blackmon boldly declared, "Without justice, you don't have Jesus."

"We, the United Church of Christ, are living in these times," Blackmon said. "There are times our journey has been preparing us for since 1957... We were made for fights — fights for justice, for love, for compassion and for equality. This is what our journey has been all about, and we are uniquely positioned in this moment to lead."

The board unanimously voted Thursday, March 9, to nominate Blackmon to lead Justice and Witness Ministries, a ministry that she has guided for 14 months as its interim executive. The final step is confirmation of her candidacy by the 31st General Synod (June 30-July 4 in Baltimore), where she will need a 60-percent majority of more than 600 voting delegates.

A search committee sought a candidate who could help the denomination continue to be grounded in justice, expand its commitment to justice, and mobilize groups of members to respond to issues in meaningful ways.

Blackmon checked off those criteria.

"I think we can attest to the national presence that Traci has brought to the United Church of Christ," said the Rev. Darrell Goodwin, who chaired the search committee. "We are blessed because of the political and activist voice she would bring to the role. She had the commitment to an inclusive and expansive lens of justice."

Goodwin said it was important to the group that they conduct a "deliberative search." Among a diverse pool of applicants, Blackmon was one of two candidates selected and interviewed by the committee.

"She has significant supervisory and management experience, budgetary experience, an initial vision for Justice and Witness Ministries," he added. "She has a proven capacity of leadership."

Blackmon, beginning her role as acting executive of Justice and Witness Ministries in January 2016, has been commuting, splitting her time between Cleveland and her home in Missouri. She is the 18th installed and the first female pastor in the history of Christ the King UCC, Florissant, Mo., in suburban St. Louis. Blackmon became a nationally recognized voice for social change when Michael Brown was shot in Ferguson in 2014. She immediately got involved in organizing the Black Lives Matter movement, effectively assisting and collaborating with the people in the community working for justice.

Blackmon was ordained in the African Methodist Episcopal Church, and served for several years in ministry before her call to Christ the King. She earned a Bachelor of Science degree in nursing from Birmingham-Southern College (1985) and an M.Div. (2009) from Eden Theological Seminary.

Before seminary, Blackmon served as pastor of Simpson Chapel AME Church in Columbia, Mo. She is the founder of the Sista SOS Summit, an intergenerational symposium designed to assist women toward spiritual and sexual wholeness, and is co-founder of "When Women Gather...," a monthly ecumenical gathering committed to the spiritual growth and development of women. Blackmon has also ministered in a healthcare setting, as a licensed registered nurse with over 25 years of experience.

Blackmon pledged to "illuminate justice efforts through the church and its affiliated organizations," and she told the board that the denomination must stand up as a counter-narrative to what she calls "a hijacking of the Gospel."

"As the church, it is not our responsibility to react," Blackmon said, "but to act."