The United Church of Christ’s associate general minister also described her father’s sudden death from COVID and shared video of her April view through a car window as cemetery workers in hazmat suits interred his coffin – the only graveside farewell she and her siblings were allowed to give him as the pandemic raged in New York City.

Thompson’s testimony came in an online discussion with one of Scotland's Episcopal bishops during Just Festival, an annual week devoted to “questions of social justice, equality and identity, both from religious and non-religious perspectives.” It coincides with the three-week arts-and-cultural event known as Edinburgh Festival Fringe. The webinar was recorded and can be viewed here or by clicking on either of the images accompanying this article.

The poignant COVID story and video – plus a poem she read about her experience – led Thompson’s interviewer, the Rt. Rev. John Armes, leader of the Diocese of Edinburgh of the Scottish Episcopal Church, to ask her about broader topics. Among them were the roles of faith and spirituality in responding to sickness, recovery, death and mourning in isolation – and what the church might learn and carry forward from the pandemic.

‘Thought for sure that I was going to die’

Thompson opened by recounting her coronavirus journey, an earlier version of which she had shared in this April UCC story and video: Upon learning on March 20 that her father in New York City was ill, she drove all night to get there from Cleveland. By the time she arrived, he had already died from what she and her siblings only later learned was COVID-19.

Then she and her sister contracted the disease. They self-quarantined in Brooklyn for weeks, losing their senses of smell and taste and experiencing severe pain. 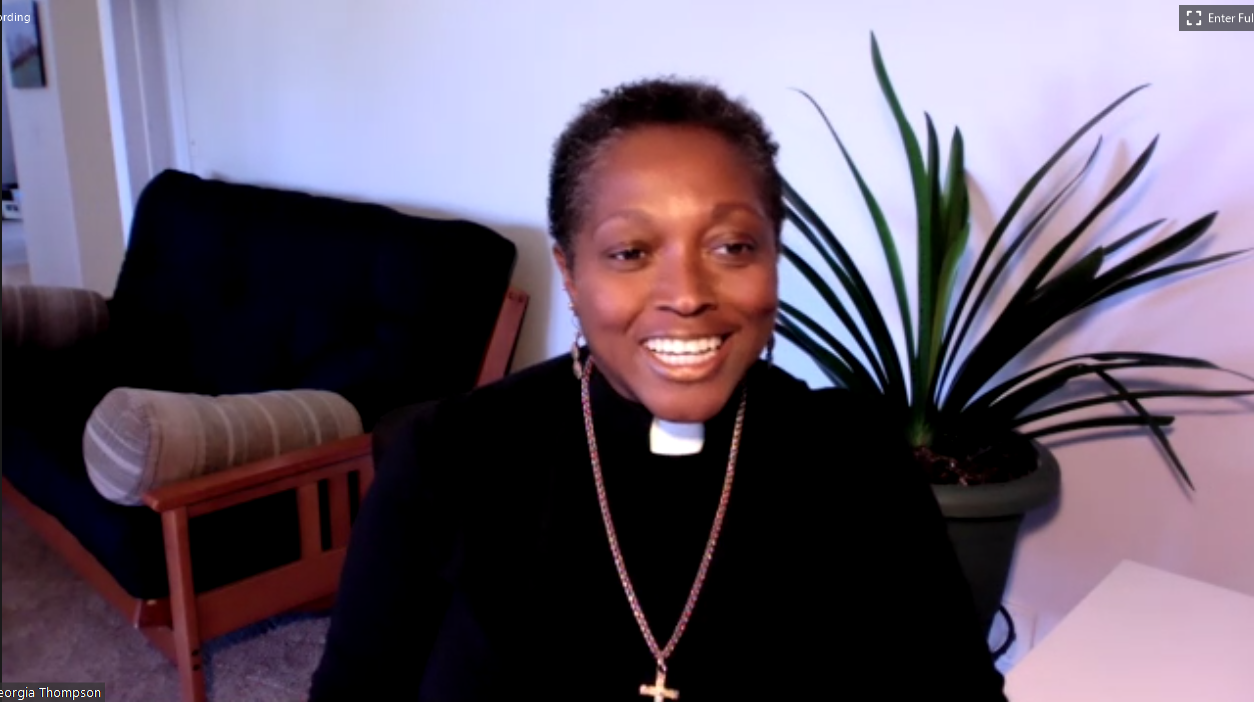 “There were nights when I closed my eyes and I thought for sure that I was going to die,” Thompson said. She credited a verse of Psalm 23 – “Yea, though I walk through the valley of the shadow of death, I fear no evil, for thou art with me” – which she repeated constantly to herself, with helping to pull her through. Meantime, with funeral homes overwhelmed, it took three weeks to arrange for her father’s burial – culminating in the news that the few family members permitted to attend would not be allowed to stand at the graveside because of the severity of the New York pandemic.

Thompson was finally well enough to return to Cleveland at the end of May. She now tests negative for the virus, but the path to recovery has been long. She described one hard-to-shake symptom as “brain fog.” “For a long time, I could not sustain the concentration, for example, to read a chapter in a book,” she said.

Fatigue has lingered, and her doctor has said many COVID patients are requiring months to get well. “Right now, I work a modified work week as best I can, because my energy is not where it’s supposed to be,” Thompson said.

‘A spiritual healing that is calling us’

But Thompson has also felt “a renewed sense of calling” to ministry. “My life was spared to continue to answer this calling,” she said, and she now feels compelled to ask, “Where is the church present in this moment? How do we show up? What is it that we have to offer?”

“I think that this is a highly spiritual time in the world,” Thompson said. “Periods of lockdown moved people into quietness and solitude that we have not seen before.” At the same time, she said, people are discovering new virtual forms of connection, often over long distances.

“There’s a segment of our world that is still trying to make meaning of this moment,” she said. “How do we do theological work and spiritual work that will help communities not just grieve and mourn but also be on paths of healing?”

As co-leader of Global Ministries of the UCC and the Christian Church (Disciples of Christ), Thompson has also noticed how “this moment of social isolation begins to amplify in national ways.” Global borders closing and tightened U.S. immigration and refugee policies are among the examples, she said. “How do we reopen those borders? … Is this a new way that we will experience living, where in order to protect ourselves we also shut out others?”

In the face of all of this, the church has much work to do, Thompson said.

From creating “space for mourning in a time of absence” to leveraging global and ecumenical relationships in new ways, “I think that there is a spiritual healing that is calling us,” she said. “And I think that the church needs to find itself in this moment and even to help identify and define this moment.”