#ThursdaysInBlack a weekly witness against violence 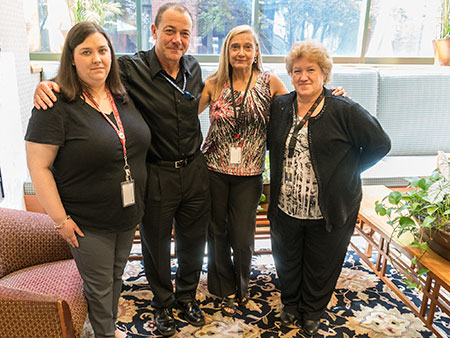 Every Thursday morning at 11 a.m., several staff members at the UCC Church House gather for a picture. It's not always the same people, or the same location, but there are two constants –– many of them are dressed in black, and it's always for the same cause.

#ThursdaysInBlack is an international campaign of advocacy and solidarity against all forms of sexual and gender-based violence. Every Thursday, UCC participants join people around the world wearing black as a symbol of strength and courage, expressing support for victims and survivors of violence, and calling for a world without rape and violence.

"The weekly witness is a reminder that the challenges of gender violence and violence in general are a global problem," said the Rev. Karen Georgia Thompson, the UCC's ecumenical officer. "Being able to stand in solidarity with the many men and women globally who continue to be victimized by rape and violence is a drop in the bucket on this issue, but provides the opportunity to raise awareness through social media and by sharing what we are doing. The statistics are alarming, and these issues are still under-discussed and taboo in many communities."

Thursdays in Black has been around a while, publicized by the World Council of Churches in the 1980s as a form of peaceful protest against rape and violence –– especially taking place during wars and conflicts. The campaign, which has seen a resurgence in the last few years, focuses on ways through which individuals challenge the attitudes that cause them.

Thompson knew about the initiative, and had been participating periodically, but committed to organizing the weekly UCC photo session, which is shared via social media. The first picture was taken March 17, and the staff continues to gather every Thursday, sharing the reason they gather as they pose. 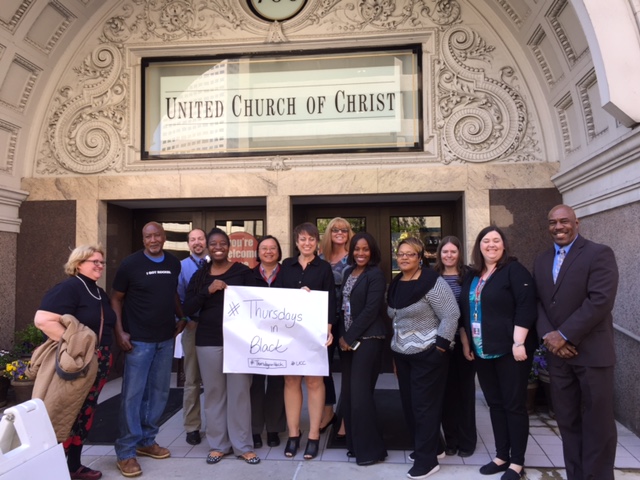 "Each week, whether here or in other places, this initiative offers the chance to educate those we meet," Thompson noted. "Last week, as members of our staff gathered for our Thursday picture, we asked a man walking down the street to take our picture," noted Thompson. "He listened as I explained about [the initiative] and noted he was not wearing black today. After taking the staff photo, which also included the newly educated caterer (far left) who was delivering to the building, he joined us (far right). We are raising awareness as we go. #ThursdaysinBlack"

The goal now is to move this idea beyond the Church House and into local congregations. Thompson said that several UCC clergy have joined the campaign by posting pictures on Facebook and Twitter, and there are plans to get the youth involved, too.

"Thursdays in Black will be a part of NYE programming in July and a part of the worship experience," Thompson said. "Buttons and zip banners will be in place on that Thursday to encourage our youth to participate, and most of all to educate them on the importance and prevention of gender-based and other forms of violence."

Participation is easy: just take a selfie and post with the hashtag #ThursdaysInBlack on social media. Right now, all of the photos that have been taken at the Church House can be found on Facebook and Twitter. The effort continues indefinitely.

"I am thankful for our staff who continue to carry this message forward in their lives," said Thompson. "They are sharing this in their homes, and though all cannot participate every week, they are standing with this issue in their own way."