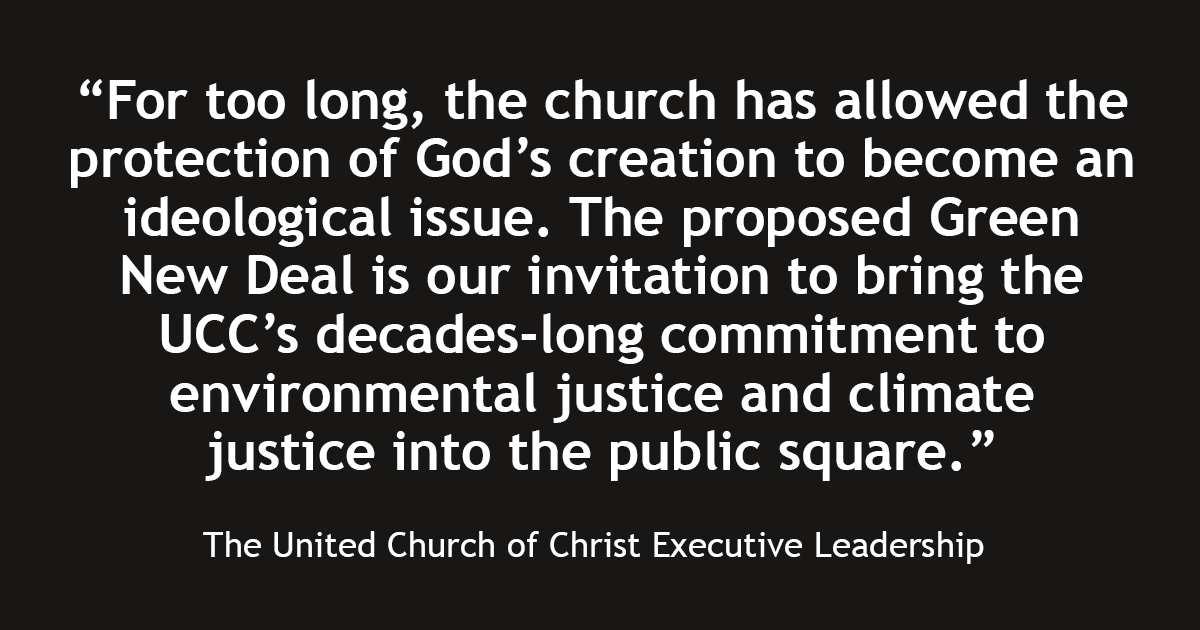 This is a statement from the Executive Leadership of the United Church of Christ.

With the release of the Green New Deal Resolution, Congress has created an opportunity for America to commit to goals, aspirations and specifics that are consistent with the UCC’s decades-long advocacy of environmental justice.

As this proposed legislation becomes a magnet for media attention and ideological positioning, we urge our congregations, pastors and church leaders to speak out. For too long, the church has allowed the protection of God’s creation to become an ideological issue. The proposed Green New Deal legislation is our invitation to bring our denomination’s decades-long commitment to environmental justice and climate justice into the public square.

Environmental justice is at the heart of the Green New Deal, recognizing that climate change threatens the safety, health, and dignity of ordinary people. It names the “systemic injustices” that disproportionally affect “frontline and vulnerable communities.” The list of affected communities is familiar to anyone who has read UCC justice resolutions over the past many decades: “indigenous communities, communities of color, migrant communities, deindustrialized communities, depopulated rural communities, the poor, low income workers, women, the elderly, the unhoused, people with disabilities, and youth.”

The resolution makes clear that there are two crises, a climate crisis and an economic crisis of wage stagnation and growing inequality, and that the Green New Deal can address both. Its goals are to achieve net-zero greenhouse gas emissions, create jobs, provide for a just transition and secure clean air and water.

Rooted in science, the Green New Deal cites the findings from the October 2018 Special Report from the Intergovernmental Panel on Climate Change. This is consistent with over a dozen UCC synod environmental and climate resolutions – all rooted in science.

In 2017, 97% of Synod delegates voted to “declare a new moral era.” The first of three “moral imperatives” was to urge “clergy to speak from their pulpits about the moral obligation of our generation to protect God’s creation.” The massive media attention now being given to the Green New Deal presents clergy with an opportunity to speak out.

We can also amplify our voice in the public square by providing our local newspapers and other media with an op ed piece explaining, for example, that creation was the “original Green New Deal” and that for decades, the United Church of Christ has advocated for the substance of this congressional resolution.

Our generation still has the power to bend the moral arc of the universe towards justice as we revive creation. Let’s do all we can to respond to God’s call to preserve God’s great gift of creation.