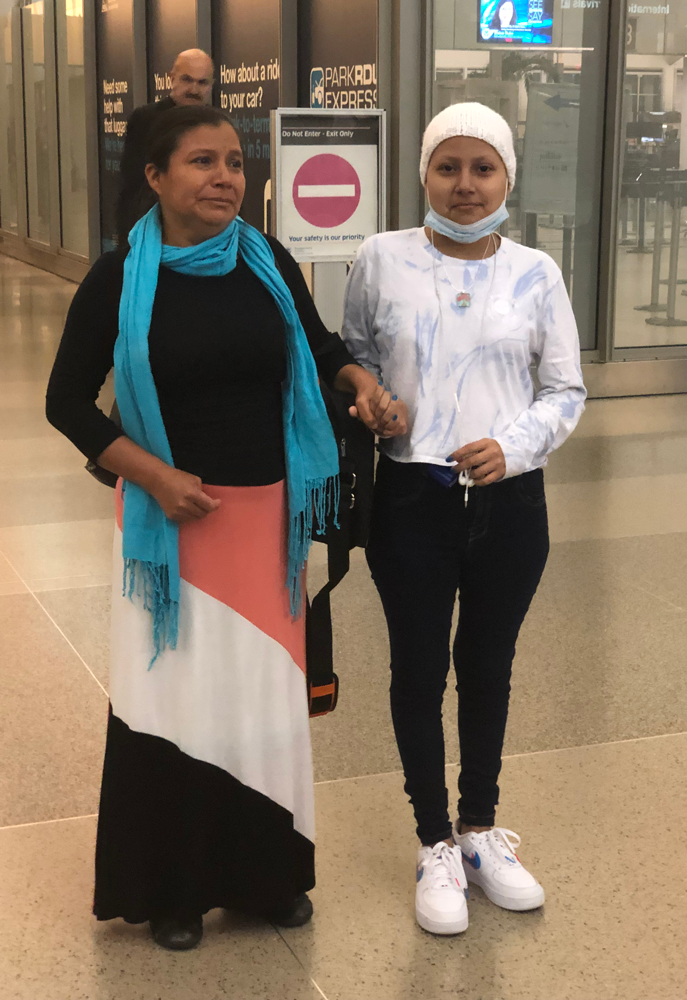 There was a joyful reunion in a North Carolina airport late Wednesday night when a 14-year-old girl battling leukemia was in her mother's arms for the first time in months.

Dalia Perez, detained at the U.S.-Mexico border, has been granted a temporary visa to be with her daughter Ixcell, in treatment at Duke University Medical Center in Durham. Their reunification brought smiles to the faces of members of two United Church of Christ congregations, once strangers but now supporters, who fought hard to make this moment happen.

"We were surprised by the news of Dalia being given permission to cross the border, and we hold our breath, as Dalia remains vulnerable even with this temporary visa," said the Rev. Melinda Keenan Wood, pastor of Pilgrim UCC, Durham. "The fluidity of change in our country’s immigration policies makes us aware that this family’s challenges remain ever present and we must stay vigilant and prepared."

"It was wonderful to see them together. We didn't realize it would move this quickly," she said of the humanitarian waiver granted to Dalia late Tuesday. "It was quite shocking, but we were elated."

In partnership with Solidarity Now, an immigrant rights advocacy organization founded by UCC member Cole Miller, the people of Good Shepherd UCC and Pilgrim UCC befriended Ixcell and worked to bring her mother to her side. Dalia arrived from California at 10:30 p.m., met by Ixcell and a dozen representatives of both churches. The teenager was slated to be back at Duke Medical Center Thursday for another treatment.

"Ixcell is in and out of hospital at this point in her treatment," Gregg-Kearns said. "Now our plan is to let the family get settled and figure out what they need going forward. Let mom lead, let her tell us ways we can continue to be supportive. What Ixcell needed the most was her mom."

Ixcell was born in North Carolina but returned to Mexico with her family several years ago. They were living in Chiapas when the teenager was diagnosed with leukemia last year. Earlier this summer, at the advice of the child's doctor, Dalia brought her daughter to the U.S. border at San Ysidro, hoping to get her to North Carolina and life-saving treatment. They were held by Customs and Border Patrol for two days before being returned to Tijuana. As they sent her back to Mexico, Dalia said, agents told her to look to God to cure her daughter.

Ixcell eventually was allowed to come into the U.S. with a relative from California. Her mother continued to be denied entry. Solidarity Now and a legal team at the border intervened, supported by the local churches, who reached out to their local congressman for assistance. Rep. David Price sent a letter on Dalia's behalf to the Department of Homeland Security in July. Ixcell's oncologist also wrote a letter in June asking immigration officials to allow Dalia to join her daughter in this country.

On August 27, according to a Durham television station report, when Dalia reapplied for admission at the San Ysidro port of entry, Customs and Border Patrol granted her a temporary humanitarian waiver. Humanitarian organizations stepped up to arrange her flights to the Raleigh-Durham area.

"As for our journey forward, our first desire is for Dalia to be able to finally be Ixcell’s mom in the present, rather than across a border. We want to give her space to reclaim family, and stand ready to support her as she articulates her need," Keenan Wood said. "The medical part is a two year ordeal, so we need to have the long view with them. My prayer is that we have/will earn Dalia’s trust to continue to surround and support her family."

Now that mother and daughter are together, the Good Shepherd pastor said that if people wanted to send cards to the churches they would get them to Ixcell. The family is staying with friends in the area while the teen is in treatment.

"This is about my mother," Ixcell said in a recent video shared by Solidarity Now. "I want her to come here and take care of me because I need her. It's not easy to be here without her."