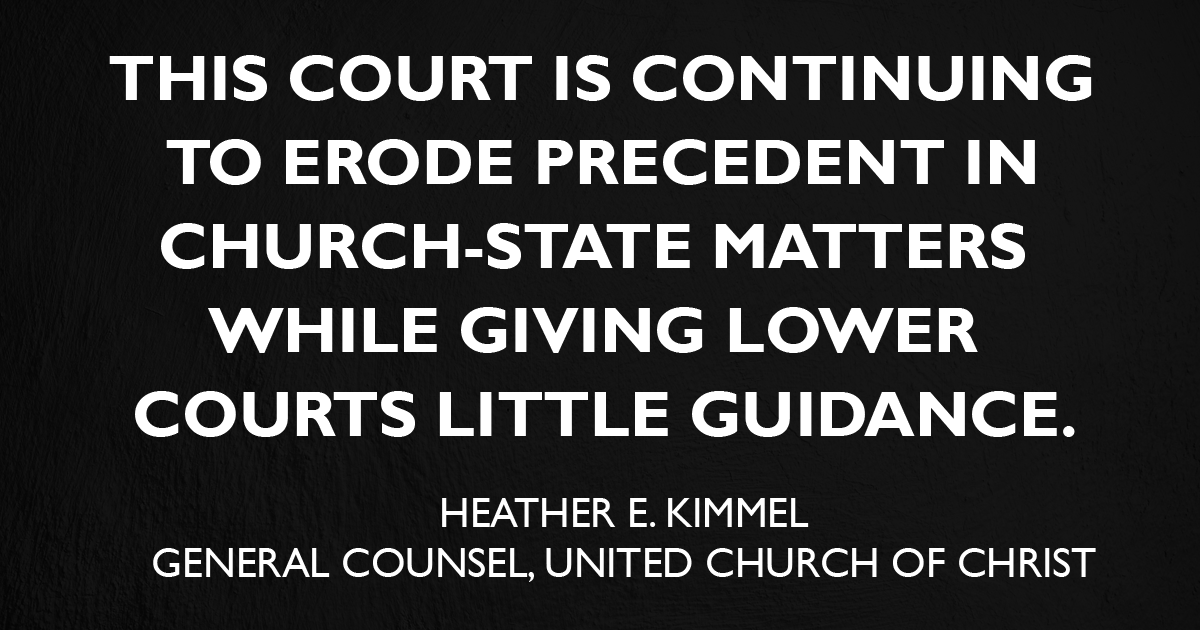 In a decision testing the constitutional principle of the separation of church and state, the Supreme Court ruled Thursday that a 40-foot cross-shaped war memorial erected on public land in Bladensburg, Maryland, does not amount to an impermissible government endorsement of religion. The United Church of Christ General Synod was among the religious organizations that had filed an amicus brief supporting the organization that had challenged the memorial.

The judges, in a 7-2 decision, overturned a lower court ruling that had declared the so-called Peace Cross unconstitutional in a legal challenge brought by the American Humanist Association (AHA), a non-profit atheist organization that advocates for secular governance. The concrete cross was erected in 1925 by the American Legion, families and local businesses as a memorial to local soldiers killed in World War I.

The association had argued that the cross violated the Constitution's so-called Establishment Clause, which prohibits the government from establishing an official religion and bars governmental actions favoring one religion over another.

Justice Stephen Breyer and Justice Elena Kagan joined the Court’s five conservative justices in parts of the majority decision. The opinion made it clear that such a monument in the shape of a Christian cross on public land was permissible but the justices wrestled over whether other types of religious displays and symbols on government property would be permitted.

Justice Samuel Alito wrote for the majority, “The cross is undoubtedly a Christian symbol, but that fact should not blind us to everything else that the Bladensburg Cross has come to represent,” Alioto said. “For some, that monument is a symbolic resting place for ancestors who never returned home. For others, it is a place for the community to gather and honor all veterans and their sacrifices for our Nation. For others still, it is a historical landmark.”

Justices Ruth Bader Ginsburg and Sonia Sotomayor dissented, and Ginsburg chose to read part of her dissent from the bench. She said the court’s decision to maintain the cross-shaped monument on public land “erodes” the constitutional principle that “demands governmental neutrality.”

By honoring World War I soldiers with a cross-shaped memorial, the state of Maryland, she said, “places Christianity above other faiths” and sends the message to people of other faiths that “they are outsiders.” Ginsburg added, “Making a Latin cross a war memorial does not make the cross secular. Quite the contrary, the image of the cross makes the war memorial sectarian. The Peace Cross is no exception.”

“In the face of today’s decision, we must all pursue new avenues to bolster the First Amendment,” noted AHA Executive Director Roy Speckhardt. “Our legislative efforts will be redoubled as the American Humanist Association works to strengthen the wall of separation between church and state, brick by brick. And in the interim, our legal team will do what it can to narrow the breadth of this decision in courtrooms across the country.”

Earlier this year, the United Church of Christ’s General Synod joined five other religious organizations in supporting an amicus brief filed by the Baptist Joint Committee on Religious Liberty (BJC) that endorsed the AHA’s position. The amicus brief, which was also supported by the American Jewish Committee, the Central Conference of American Rabbis, the Evangelical Lutheran Church in America, and the Stated Clerk of the General Assembly of the Presbyterian Church (U.S.A.), argued that the cross is not secular and that the U.S. government has no business maintaining the cross on public land.

In response to the Court’s decision, UCC General Counsel Heather Kimmel said: “This Court is continuing to erode precedent in church-state matters while giving lower courts little guidance in these matters.  The Court cannot rely on history to cure all breaches of the First Amendment.”

Holly Hollman, the BJC’s general counsel, said, “The Court’s decision holding that the Bladensburg cross is constitutional relies heavily on the particular history of that memorial. The splintered decision shows how difficult it is to reconcile the government’s promise of religious liberty for all while upholding a massive Latin cross on government land.

“BJC is pleased that the Court did not accept the extreme arguments put forth by the government and its allies. The Court did not abandon the First Amendment’s promise of neutrality among faiths. It also specifically acknowledged the cross as a Christian symbol, not a universal symbol of sacrifice. Important for our pluralistic society, the decision does support the constitutionality of Christian-only monuments sponsored by government today.”

The full decision is here.