Synod’s final plenary in Milwaukee concludes with joy and tears

The United Church of Christ’s 32nd General Synod wound to a close on Tuesday, June 25, with moments of levity and moments of tears, calls to prayer and calls to the street.

The final afternoon plenary began with the usual “Speak Out” opportunity, this time capped by the Council of Conference Ministers joining in singing their own lyrics to the “Doxology,” praising the delegates and their patience with the “clickers,” the Synod’s electronic voting devices.

Noting that the start of the Monday afternoon plenary had been delayed so that delegates could participate in a march and rally to protest U.S. immigration policies, Moderator Norman Williams asked for a report back on the action. Noel Anderson, Church World Service’s grassroots coordinator for immigrants’ rights and coordinator of the UCC National Collaborative on Immigration, started it off by leading the gathering in a chant; “UCC is loud and clear; immigrants are welcome here!” Anderson, who helped coordinate the march, celebrated Synod participation, noting that between 500 and 1,000 people participated in the rally.

Local organizers from the UCC Wisconsin Conference and Voces de Frontera expressed their appreciation of the Synod support for the march. Associate Conference Minister Lisa Hart, who works on immigration issues, said local activists were “overwhelmed and grateful for the support of the UCC.”

The Rev. Linda Jaramillo, a member of the UCC’s Collaborative on Immigration and moderator of the Central Pacific Conference, noted that nearly half of the churches in her conference have declared themselves “immigrant welcoming congregations,” saying “We have renewed our commitment. . . . We have decided not to resolutionize the church, but to revolutionize the church.” 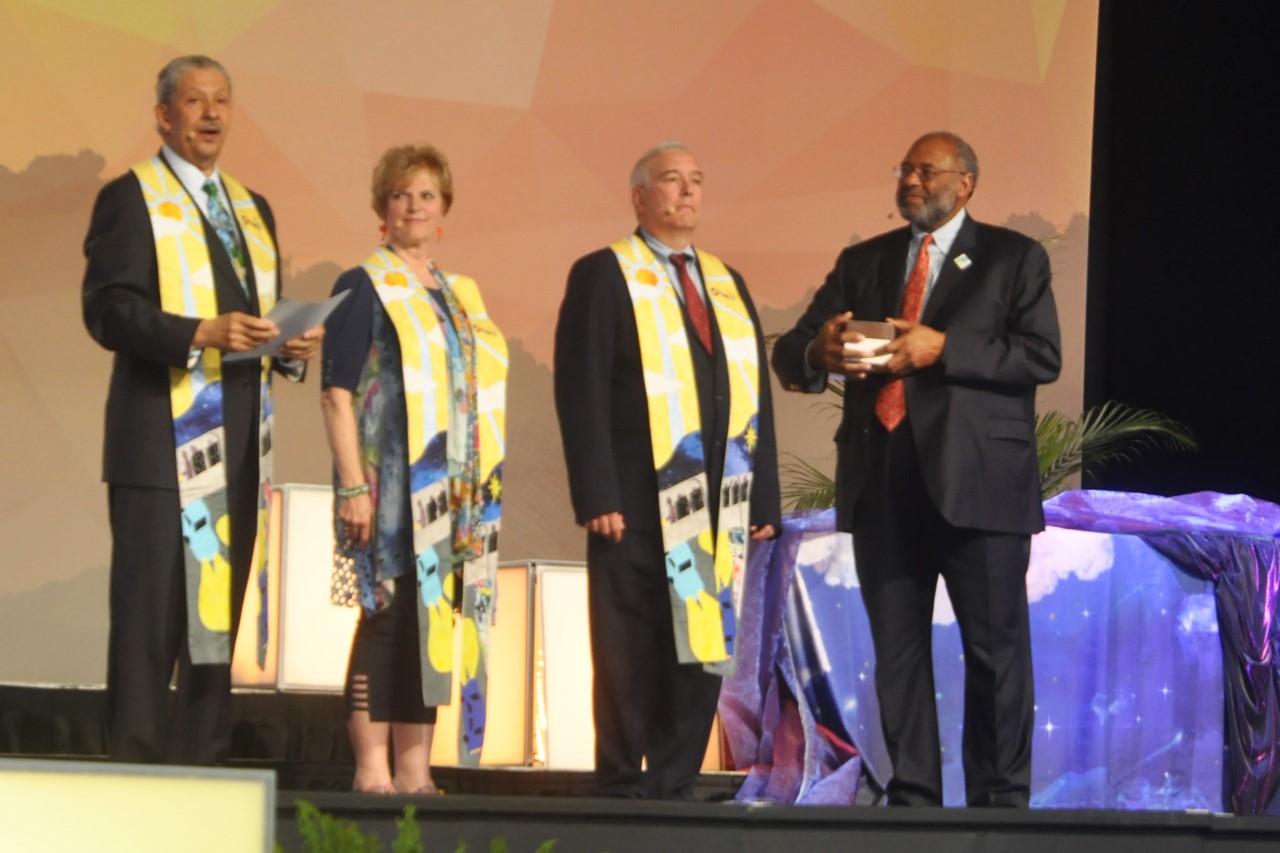 During the afternoon session, the assistant moderator of the Milwaukee Synod, the Rev. Penny Lowes, was installed as moderator of the 2021 Synod and Robert Sandman was installed as assistant moderator. Lowes, a recently retired pastor, previously served as chair of the UCC Executive Council, which preceded the current UCC Board. She is a member of St. Paul UCC in Warren, Mich. Sandman, a member of North Windham Union Church UCC in Windham, Maine, is a professor of business and economics, and previously served the UCC at the national, conference and local church levels. Williams presented both with stoles designed for the Milwaukee Synod.

Outgoing UCC Board chair Frank Bolden presented Williams with a commemorative gavel, and thanked him for his “wisdom, caring nature and sense of humor,” and “an outstanding job well done.”

However, Williams’ job was not over yet. Emily Rix, of the Kansas-Oklahoma Conference, observed that the plenary would end early and asked the moderator if more time could be made available for persons who had not had a chance to express their views before a controversial resolution related to access to Synod exhibit hall space was tabled.

Williams responded that he had “deep respect for the decisions made by the delegates on the floor,” and that if he overturned their decision to table the resolution, it “would not show the respect” they deserved. Then he noted that the UCC Board sits as the General Synod in between the biennial gatherings, and that the new, unified board had been in existence for only six years. “We need to exercise our board,” he said. “I deeply believe this conversation should go forward, and they have the authority to administer” that discussion.

Later, as the plenary approached adjournment, Williams said that the board had decided to remain behind to engage in what he called “a courageous conversation.” He then told the gathering, “It has been a singular time to work with you.” 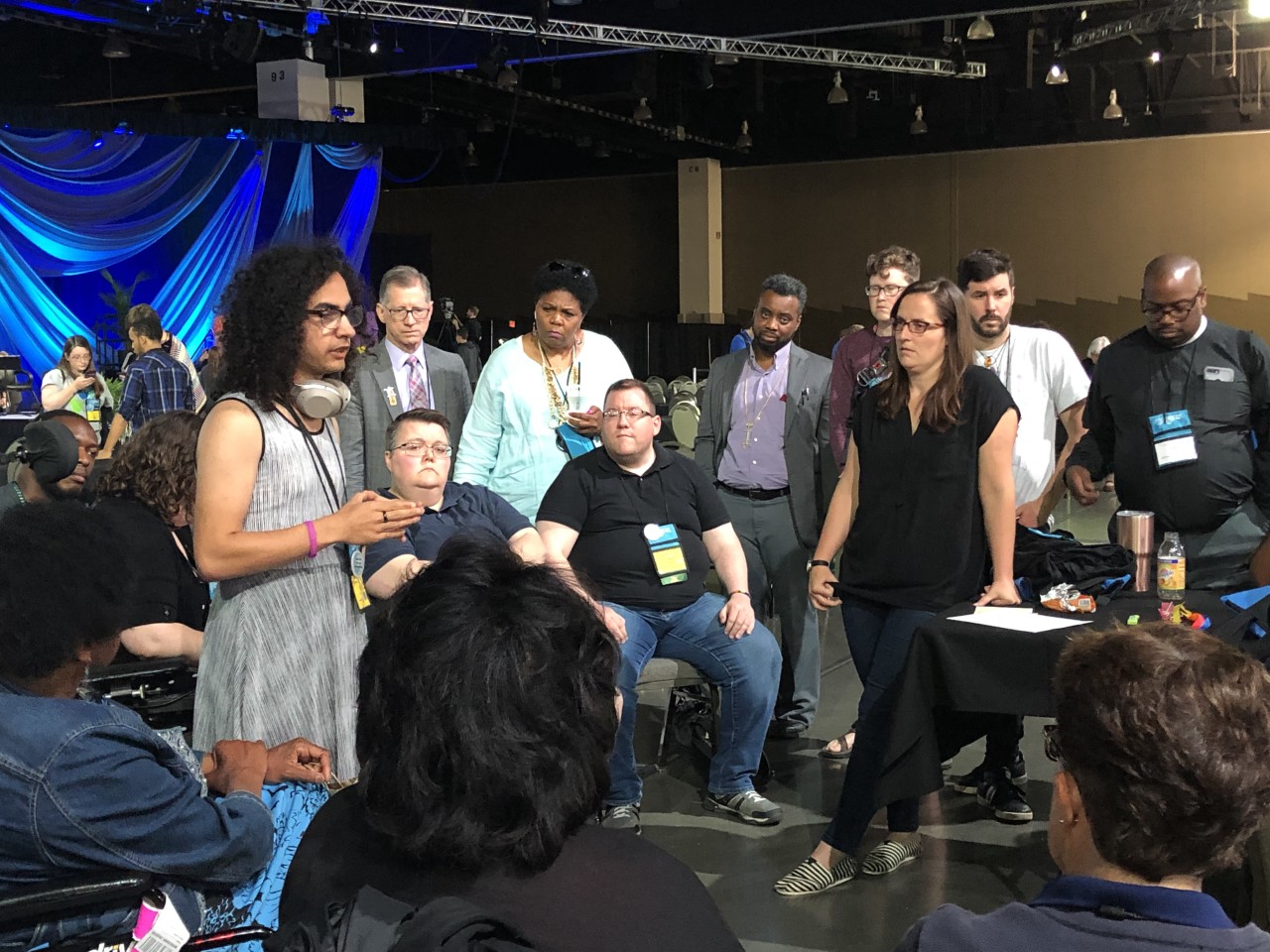 After the plenary adjourned, the UCC’s officers and board gathered in the center of the plenary hall with about 50 people who wanted to share their views. After nearly an hour of discussion, Bolden, the outgoing board chair, summed up by saying, “We heard your pain. We feel it. And we’ll do something about it.”

The final theological reflector, musician Sandy Champion, captured the range of moods at Synod with comments on her experience and new songs she wrote during the deliberations. As a songwriter, she said, she tries to “listen and stay out of the way.” She said she heard “passionate voices. . .within these walls and out on the streets,” “words choked by tears” and “I heard love.”

Champion then sang “Let It Shine,” which she described as a “salty song” that “acknowledges the difficult issues and feelings and tries to find a way through.” She followed that with “Surrender Meditation,” and added, “The hope is that at the end of it, you will feel your own light and the light of your neighbors.”

As Williams moved to adjourn, he recognized a Latinx speaker who shared that the Associated Press had just distributed a photo of a father and 23-month-old daughter who had drowned trying to cross the Rio Grande, and asked the plenary to pause for a moment of prayer. (The father was later identified as a Salvadoran migrant, Oscar Alberto Martinez Ramirez, who died as he tried to swim with his toddler Valeria between Matamoros, Mexico, and Brownsville, Texas.)

The Rev. Traci Blackmon, associate general minister for Justice and Local Church Ministries, then delivered an emotional prayer: “How long, Oh Lord, how long? How long before you respond to the cries of your people?  …Help us collectively as a nation connect with the compassion that you breathed into us. Don’t let us forget the pain of this moment. “

After collecting his emotions, Williams concluded the plenary by praying, “On those days when it feels like we are sent out like sheep among wolves, I pray that God may give us grace to endure and endure and endure. And may the Lord watch between me and thee, while we are absent, one from another.”