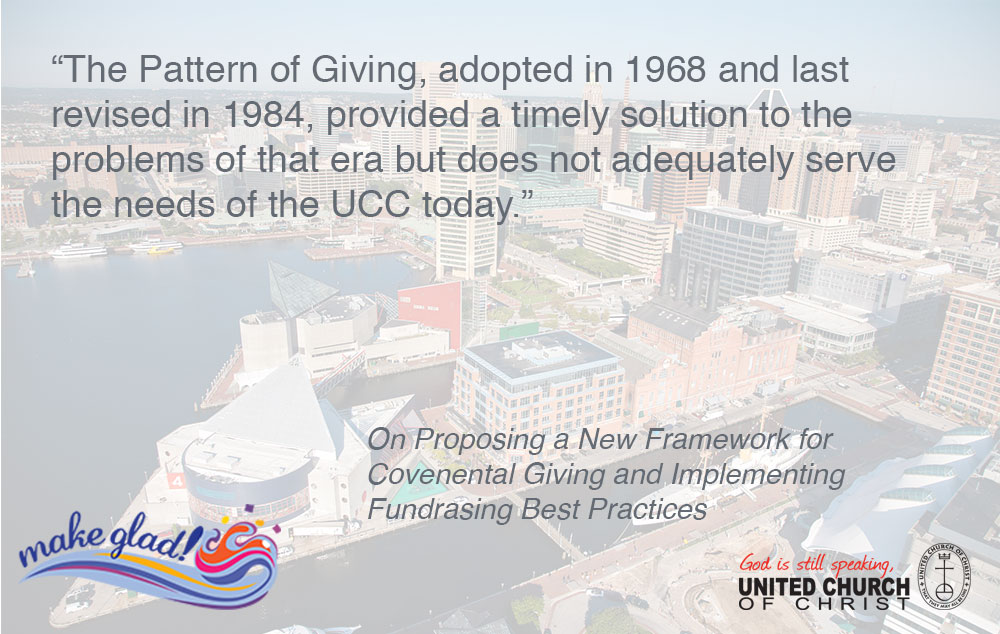 Philanthropy has evolved since the formation of the United Church of Christ 60 years ago, but the denomination's policy and patterns around giving have not. That could soon change.

A pair of resolutions to the 31st General Synod of the United Church of Christ would move the church past its current "Pattern of Giving" model in favor of a more modern approach that would promote a culture of giving in all settings of the church. The two resolutions, to be considered when the governing body gathers June 30-July 4 in Baltimore, have similar motivations, explained the Rev. Rich Pleva, Iowa Conference Minister.

"[Nebraska Conference Minister] Roddy Dunkerson was really the one who sat up and said it (the current giving model) places undue pressure on the national setting of the church," said Pleva. "It's the national setting that suffers as a consequence of the conferences' inability to finance their operations... We are hamstrung by this pattern that said conferences should be giving 50 percent of their receipts to national — and only a few conferences are able to do that."

"The whole thing has got to be rethought, and that's what the resolutions are about," Pleva added.

The Iowa and Nebraska conferences sponsored one resolution, which asks the denomination to lay aside the Pattern of Giving policy, while the UCC Board of Directors' resolution goes on to propose a five-year transitional plan centered on donors to supplement current contributions with additional ways of giving. It's possible the two resolutions, which need a simple majority to pass, could be combined at General Synod.

Said Pleva, "We are very much on board with each other… We've spoken on the ways we might advocate for the slightly different orientation of the two resolutions, and the creative work to bring them together."

The Rev. Mary Nelson, a regional minister of the Connecticut Conference, and the Rev. Andrew Warner, pastor of Plymouth UCC in Milwaukee, co-chaired a UCC Board-appointed task force that researched giving trends throughout the denomination, and recommended the changes outlined by the Board's resolution.

"This is a time of change in the church, and it’s a time when we can allow for change to our policies in ways that help the church be more creative in giving and stewardship," Nelson said.

With an overall decline in church giving, according to numbers published in the UCC Yearbook, the amount of money making its way from conferences to national offices has steadily dwindled by 55 percent from 1985 to 2015, from $12.9 million to $5.8 million.

The board's resolution charges the national setting of the UCC to build the next phase of fundraising across the wider church in partnership with conferences and congregations. The goal is for all church settings to participate by 2020. As Nelson described, "We’re hoping for more conversation and collaboration when it comes to raising money. The current pattern sets up the settings of the church to be competitive with each other," Nelson said. "We want to encourage conversation and collaboration with conferences, congregations and donors."

Pleva said he hasn't encountered any opposition to the resolutions, saying that there is "no dispute the current system doesn't work." Still, he also acknowledges there could be some anxiety from conferences given these potential changes. "Some conferences take a look at what might ensue and certainly what comes next could be threatening for some conferences," he said. "I don't feel threatened in our conference, because people give to that for which they have passion."

"I think the difficult part is building the structure that comes next," Pleva said. "I think it's challenging, but we'll work it out."