Delegates to the United Church of Christ's national meeting on Monday, June 24, overwhelmingly approved a request by its three conferences in Connecticut, Massachusetts and Rhode Island to dissolve and join together to form a new conference.

The vote was 601 to 90, with four delegates abstaining. The new conference, not yet named, will officially come into being on Jan. 1.

"I believe that the Holy Spirit is doing a new thing in our midst – provoking us into new forms of church for such a time as this," said the Rev. Jocelyn Gardner Spencer, pastor of the First Congregational Church of Woodstock, Conn., and moderator of the newly forming conference.

"Building this new institution is an opportunity to reexamine the patterns and practices that hold us back from fully embodying the gospel. We are shifting from independence to interdependence, from ownership to stewardship, from competition to collaboration," Gardner Spencer said. 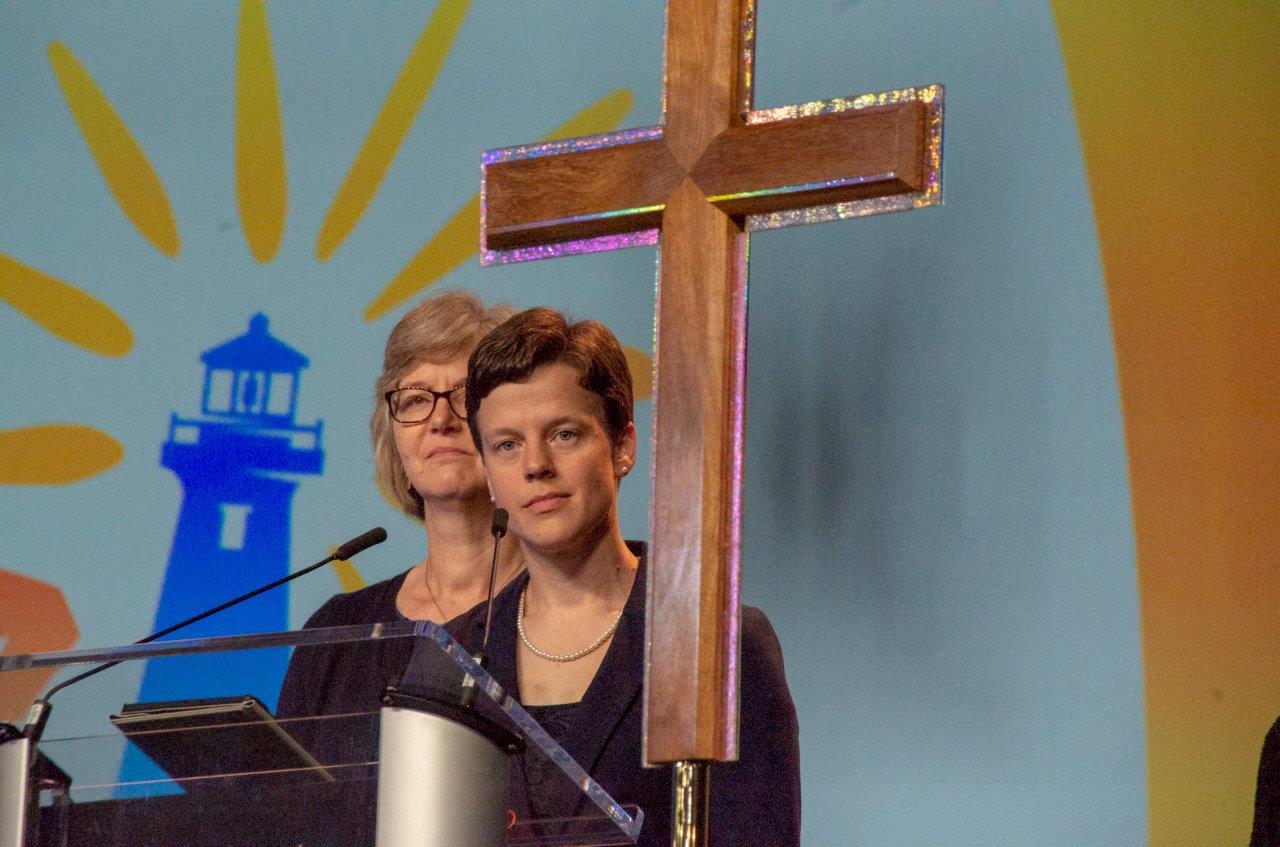 In the days leading up to the vote, staff and board members of the three conferences met with other conference caucuses, spoke at a hearing attended by 70 people, and held countless one-on-one conversations with delegates about the proposal.

One concern repeatedly raised was the concentration of resources, wealth and power in the new southern New England conference, which will comprise approximately 625 churches and 138,000 members and have about 100 General Synod delegates. Gardner Spencer, presenting the resolution in behalf of its proponents, said this concern had been heard. She assured delegates that internal structures of accountability are being built into the new conference’s systems, and that she will seek out relationships to assure external accountability as well.

"We will be dedicated to right and faithful relationship with you as covenant partners. We will use our resources missionally, sharing openly our experiments, mistakes, and learnings," she said. "We will hold power faithfully, not as power over, but as power with — not the power of domination, but the power of solidarity – the power that brings us all together to be a stronger voice for justice, a more whole Body of Christ, more faithful disciples of the Living God."

On Friday morning, the Rev. John Dorhauer, UCC General Minister and President, told delegates of the three conferences at their caucus that there were two reasons he was a big fan of the initiative.

First, he said, "you declared as part of your missional undertaking that you could do what the Holy Spirit had called you to do better together than apart from one another. And, you believe you have created a greater capacity collectively … for proclaiming the progressive voice of Christianity in southern New England and to the world. I love that."

The second reason, Dorhauer said, is that the three conferences are demonstrating good stewardship in a denomination that is a third of the size it was when it formed in 1957.

"I really think what the church has been telling us is that we don't have the resources to fund 38 middle judicatories," he said. "Every level of this denomination – local church, conference, national – we're all trying to right-size our investment in the structure and infrastructure that supports the mission."

The Synod vote has been a long time in the making for the three conferences.

"After years of prayers, deliberation and dialogue and, most importantly of all, collaboration among partners, today was a moment of affirmation from the delegates of General Synod," said Connecticut Conference Minister the Rev. Kent Siladi. "We arrived at this moment led by the Spirit of God and convinced that our 'why' as a new Conference is to live the love and justice of Jesus."

"We move onward together with God's help and our common ministry to make disciples, share God's love and justice; innovate and adapt and build covenant partnerships. Praise God from whom all blessings flow," he said.

Rhode Island Interim Conference Minister the Rev. Marilyn Kendrix said, "We are overjoyed by the positive affirmation of our siblings in Christ and we feel the heavy weight of responsibility to live into our dreams for the UCC in southern New England."

Massachusetts Conference Interim Transitional Conference Minister the Rev. Don Remick said he was "grateful to our UCC family for their support."

"As we experiment with living together into our 'why' with each other and the Holy Spirit, we are moved even as we are moving. And we commit to our covenant journey as explorers in that uncharted territory of the ever-changing landscape of ministry," he said.