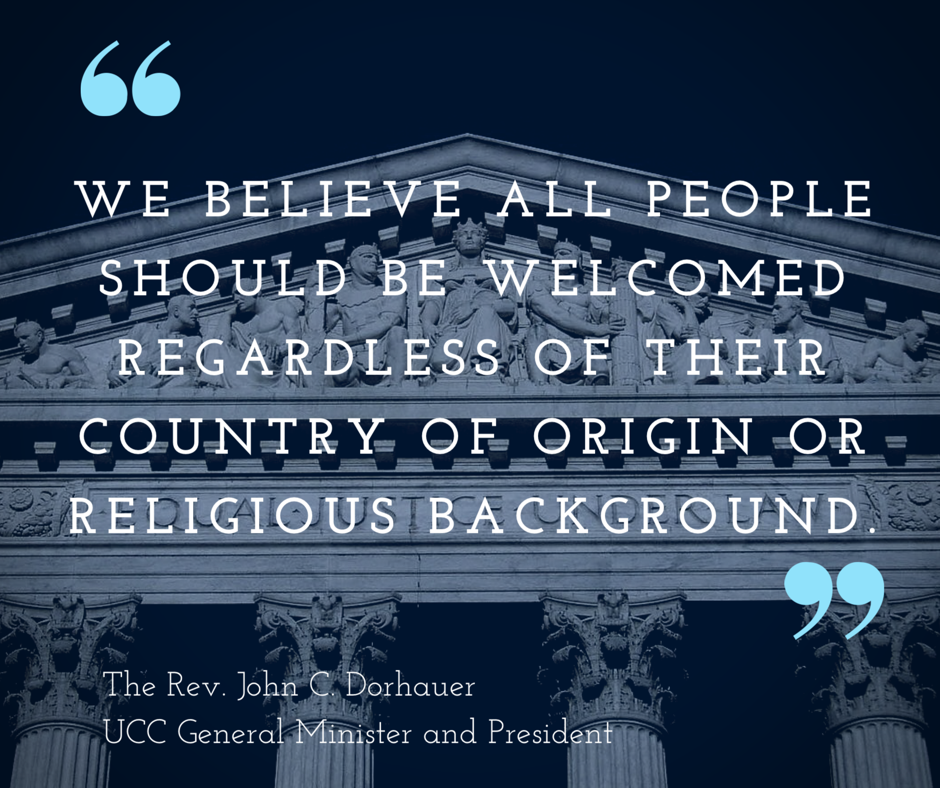 In the final days before concluding business for the summer, the U.S. Supreme Court outraged leaders of the United Church of Christ leaders who have consistently voiced their support and welcome for refugees to the United States, and for same-sex couples who are entitled to equal rights and protections from public discrimination.

The Supreme Court decided on Monday it will support parts of the Trump travel ban until it hears a review of the two cases that struck down that executive order. It will also review a Colorado case involving a baker's right to refuse service to a same-gender couple.

"Discrimination on the basis of national origin or religious tradition is both unjust and un-American," said the Rev. James Moos, a UCC national officer and executive of Wider Church Ministries. "While we are disappointed that the Supreme Court is allowing the partial implementation of the travel ban, we hope that when they review the case in October they will block the implementation of the ban in its entirety."

The administration’s travel ban targets travelers from as many as seven Muslim-majority nations in the Middle East and Africa. On June 26 the nine justices effectively reinstated parts of that ban, restricting access to foreign nationals with no relationship to the U.S.

"The Supreme Court decision to hear the Muslim ban and allow portions of the ban to take effect is a blow to human rights and justice in this country," said the Rev. John C. Dorhauer, UCC general minister and president. "The United Church of Christ has a long history of supporting refugee resettlement with many of our congregations working to co-sponsor and welcome refugees upon arrival. As the UCC, we believe all people should be welcomed regardless of their country of origin or religious background. Allowing any part of Trump's Muslim ban to go into effect is an affront on our moral and humanitarian values and we are committed to continued struggle alongside our refugee and immigrant brothers and sisters to stop these discrimantory policies."

According to the Washington Post, the court said that foreign nationals with a connection in the U.S. — who want to visit or live with a family member could come into the country, as could students from the countries designated in the ban (Syria, Iran, Yemen, Libya, Somalia and Sudan) if they are attending or admitted to a U.S. college.

But Moos and other opponents to the travel ban said any ban isn't justified from a moral, legal or security standpoint.

"The travel ban was ordered by the president on the basis of national security arguing, for example, that Syrian refugees entering this country pose a terrorist threat," Moos said. "That concern has no basis in fact. Since 1980, not a single American has lost their life due to an act of terrorism committed by a resettled refugee. The travel ban arguably makes us less safe by perpetuating the notion that America is anti-Muslim, thus giving extremists such as ISIS a recruiting tool."

"We continue to believe strongly that the executive orders that have implemented travel bans should never have been issued," said the Rev. Mary Schaller Blaufuss, who leads the UCC Global Sharing of Resources Team. "The unsaid part of today’s news is that while the constitutionality of the 'travel ban' of President Trump’s Executive Order is making its way through the U.S. judicial system, anti-refugee proponents have increased efforts with state governments to pass and implement anti-refugee restrictions. Because of congregational strength at local and state levels, it is particularly important for people of faith to advocate with their state and local governments for welcome."

As for the case about the Colorado baker, the court will test state laws that ban businesses to refuse service based on sexual orientation against claims of religious freedom. Twenty one states have such laws. In 29 states, where there are no such laws, gays and lesbians legally married can still face discrimination in employment, housing and public accommodations.