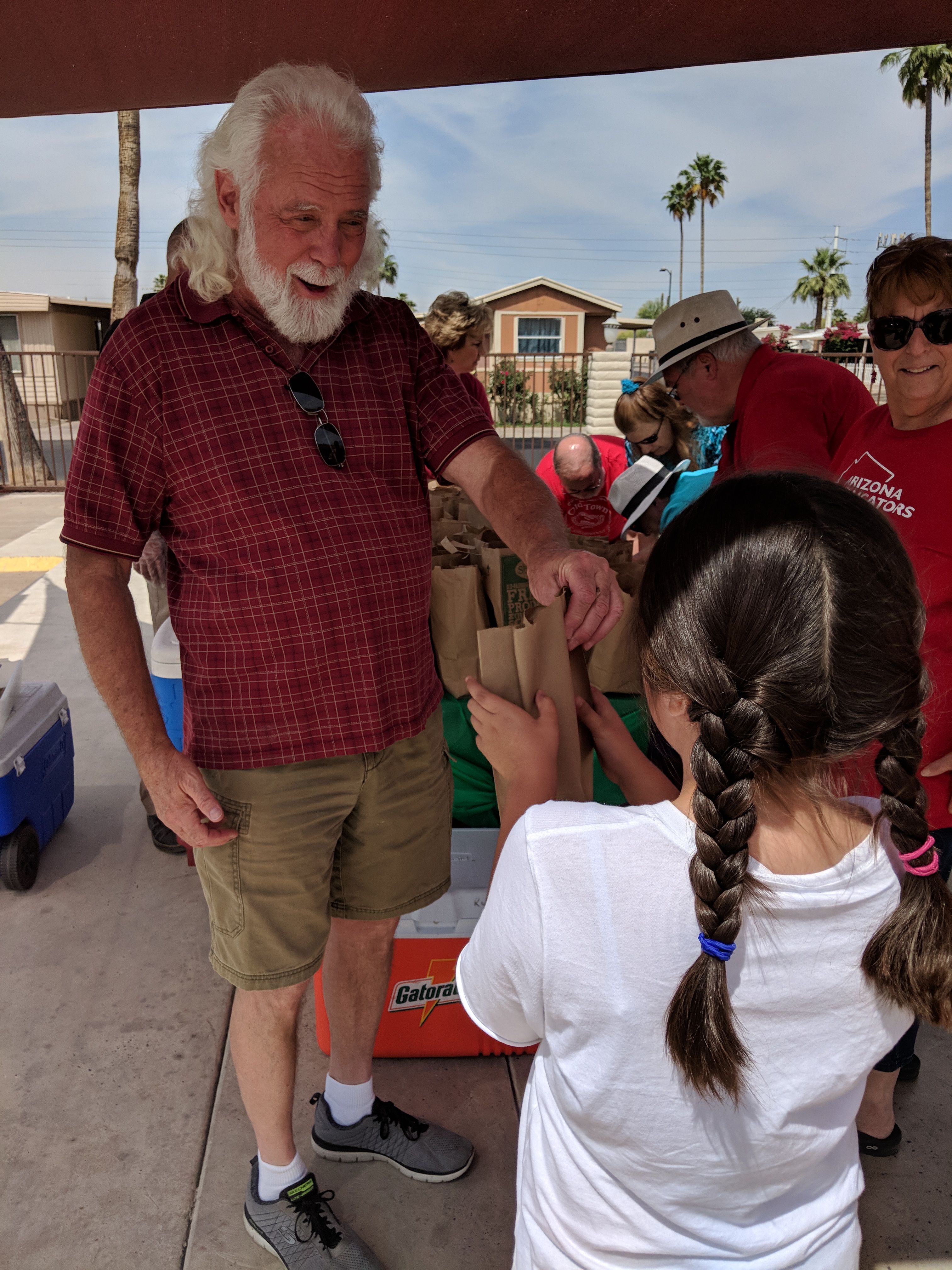 Love of children and love of neighbor are evident across the Southwest Conference United Church of Christ (SWC) this week, with people stepping up to feed children and assist families impacted by the statewide Arizona teachers walkout. The action began Thursday, April 26, and is expected to continue into next week.

"The walkout was announced during our annual meeting (on April 21)," said the Rev. William Lyons, Southwest Conference Minister. "I called on churches in the SWC to open their doors to children to ease the burden this places on families and to support the educators in their need for a living wage. We have volunteers with background checks already in place. And our congregations are filled with pop-up grandparents just waiting to care for the beautiful children of our communities."

The educators, who planned this last-minute 'Red for Ed' walkout, are calling on state lawmakers to pass a budget that increases teacher and school staff pay, and supports more classroom resources. On Thursday, 50,000 teachers and their supporters in red t-shirts marched through the streets of Phoenix and around the Arizona Capitol grounds.

With that demonstration sending parents scrambling to figure out how to care for their children while the schools are closed, several UCC churches stepped in to fill the gaps.

Rev. Rock Fremont, pastor of Shepherd of the Hills UCC in East Phoenix, opened his doors to students, young and old — from first graders to high schoolers.

"One of the reasons this was so important, in addition to supporting parents and educators, we have a high number of students who receive free meals. We want to make sure they have a safe place to be and that they had adult supervision," Fremont said. On Thursday, his church hall was staffed with eight volunteers, and 16 younger children showed up. Friday, more than two dozen children showed up, and the pastor fully expects that number will grow into next week. 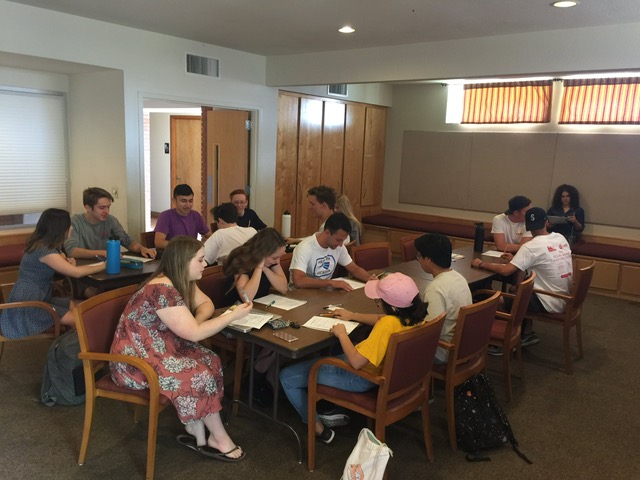 Also on Friday, the church sanctuary was occupied by a group of AP high school students and their teacher, who is prepping a large group to take their advanced placement exams.

"It's an amazing opportunity to welcome people into our space, some of which would probably never set foot in a church," Fremont said. "With these high school students—we can provide that radical welcome, and we'll see what today brings."

Fremont initially thought he would support the educators by joining them in their march, "but as I thought about what we could actually do to 'be the church' in this community, what the actual hands and feet work is, where the needs will be, we have to take care of the kids."

Tempe Community Christian Church, in partnership with the Guardian Angels Catholic Community, is offering space, food and fun to students in its community who need a place to go during the walkout. Pastor Sue Ringler said the church has been open from 6 a.m. to 6 p.m. the last few days, providing breakfast, lunch and a bagged meal to take home if needed. "We have been serving 28  4-12 year-olds yesterday and today and we are already planning volunteers/scheduling for next Monday—Wednesday," Ringler said. "It takes a village and we are grateful members of the village." 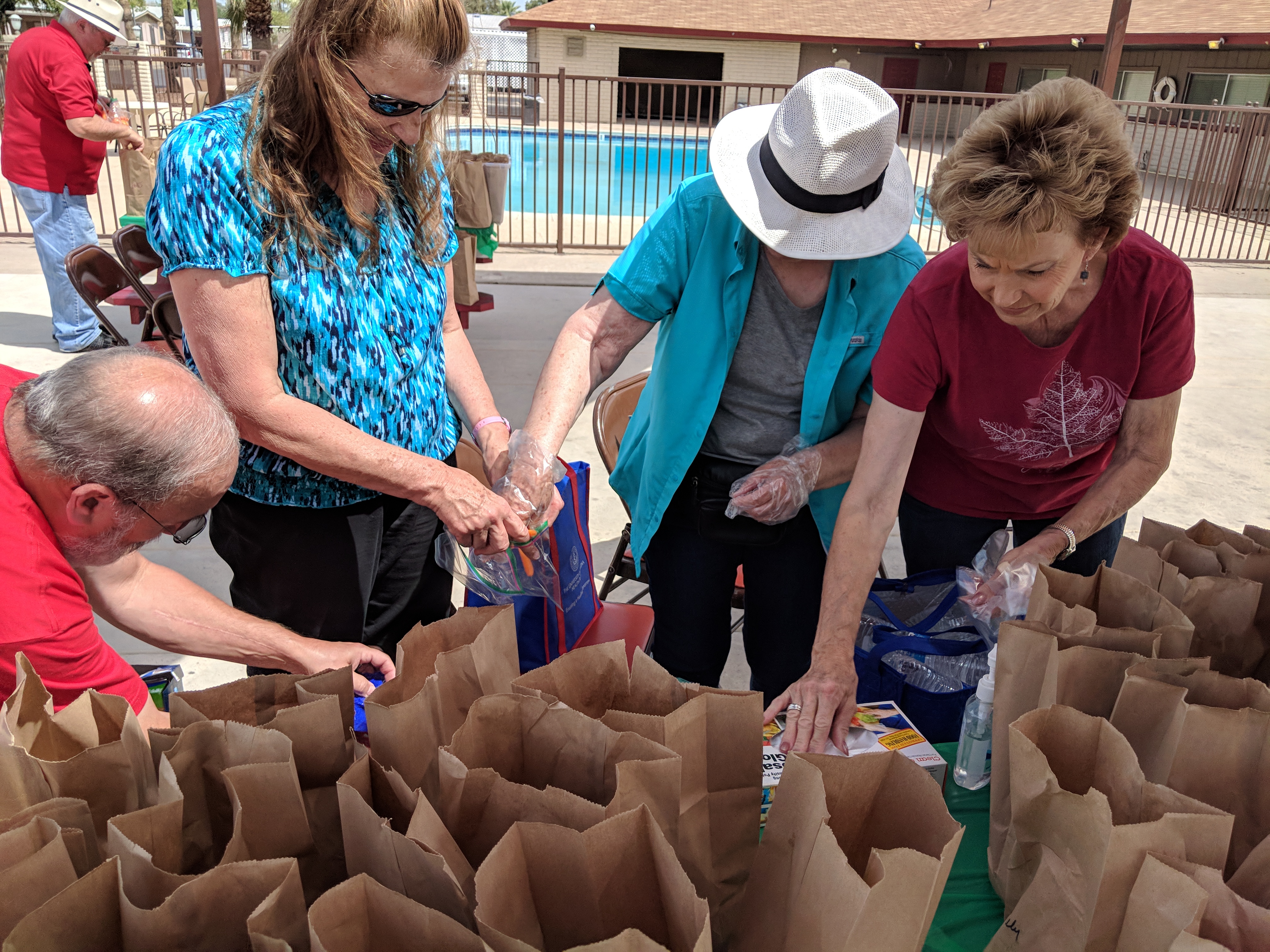 In Phoenix, several volunteers from Shadow Rock UCC have been assembling bagged lunches, providing food to hungry students at community lunches in partnership with All Saints Lutheran Church. The two congregations each set up space in a large neighborhood, offering food to children and their caregivers. "Although this is a small act, we hope that providing lunch becomes one less thing for our educators and families to have to think about. Shadow Rock is proud to support #RedForEd and our teachers," said Abeth Spencer, Shadow Rock director of communications. "We are expecting the strike to go into next week because the legislature took Friday off. We'll be ready."

Lyons, who was on hand at the Turf Mobile Manor trailer park where Shadow Rock has been hosting, said the spirit of generosity was contagious. "The mobile home manager was incredibly supportive and ordered pizza to supplement the bagged lunches," he said. "The kids were all smiles, their caregivers ranged from high school students to parents, and they were all very grateful.

In Sahuarita, the local food bank at The Good Shepherd UCC prepared to assist families with food over the next few days. Penny Pestle, chair of the food bank, said the organization has been working with the schools to determine how to help. The Sahuarita Food Bank delivered backpacks with staples like tuna on Wednesday afternoon to schools in the area in need of the most assistance, and provided more than 400 sack lunches with sandwiches, fruit and other items. Church volunteers are stepping up to add additional assistance to food distribution through Saturday. Teachers and neighbors have dropped off food and financial support, and church members have been baking cookies to drop off at demonstration sites.

On Sunday, First Church UCC in Phoenix will be hosting a special meal that afternoon for parents and kids challenged by the walkout. The church’s senior pastor, the Rev. James Pennington, added his congregation participated in the teachers march and distributed food and water.

Lyons said while it's important for the churches to do what they can to assist the children and their families, the SWC also supports the effort of the teachers. "We also stand in solidarity with our educators calling for a living wage."