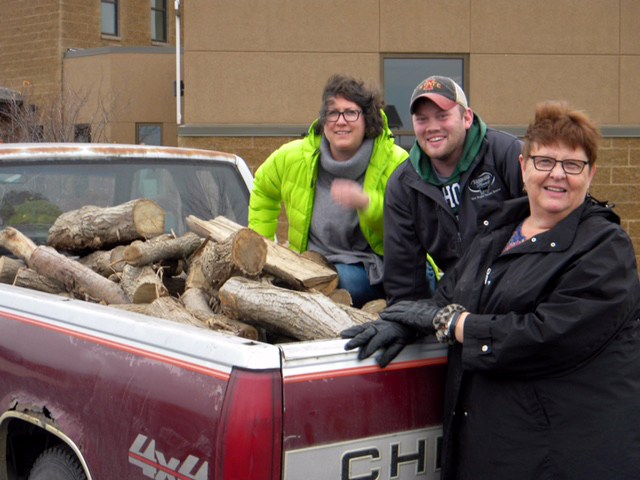 When South Dakota pastor the Rev. Jean Morrow celebrates her 60th birthday this week, she'll be marking the occasion with several friends at the Standing Rock Sioux Reservation where they will stand with the water protectors opposed to the Dakota Access pipeline. And they are bringing gifts.

Morrow, the senior pastor of Spirit of Peace UCC in Sioux Falls, decided to journey to Standing Rock on her birthday a few weeks ago during the South Dakota Conference Sacred Conversations on Race fall retreat. One of the issues the group focused on Oct. 10-11 was the Dakota Access Pipeline (DAPL).

The citizens of more than a hundred Native nations and their allies want to stop construction of the $3.8 billion pipeline slated to run from North Dakota to Illinois under the Missouri River, the water supply of millions of people, and through sacred lands of the Standing Rock Tribe.

"Our Native American clergy colleagues made an impassioned plea for us to come and bear witness," said Morrow. And she was inspired to do what she could.

"We take seriously our role as a voice for the voiceless when we see injustice. We are a highly educated group and don't hesitate to learn more." So on Oct. 16 Morrow preached a three-part sermon about the DAPL conflict.

"The first part was a quick background/update about the Standing Rock stand-off. I had preached on it before, so it was truly an update for most. The second part was on the theme of water is life and the insight that Lakota spirituality gives us in how we are part of Creation and water is our kin. The third part of the sermon was an invitation/challenge," Morrow said. "I told the congregation I was going to Standing Rock on Nov.2-5 to mark my 60th year and that I wanted them to come with me."

So Wednesday, Morrow and four members of Spirit of Peace UCC are heading to Sacred Stone Camp in North Dakota with a pick-up pulling trailer of firewood. Thursday, another group of 9 will join them at the camp for the water protectors. The church is also taking more than $3,200 in gift cards for gas and supplies. Pastor Morrow challenged her congregation to bring firewood, or something else needed from the camp supply list to church on Sunday, to help the water protectors prepare to hunker down for the winter.

"We are responding to the cries of our neighbors. We are responding to centuries of racism and abuse of the Native people," Morrow said. "We know that we are living on their land, and that we paid them nothing for it. The least we can do is protect their water…and ours. It is also a response and loud cry to pay attention to what we are doing to our precious Earth."

"As members of a UCC church, we have a moral and ethical obligation to protect our planet from global warming, over-population and destruction of species both plant and animal," said Jack Billion, a Spirit of Peace member accompanying Morrow to Standing Rock. "It is my conviction that all of us, 'people of the wider church' or citizens of this planetary home have an obligation to become involved in this discussion. Hopefully we might recognize that this is a 'water carbon planet' and we must be committed to caring for our home. Many early civilizations recognized this responsibility; hopefully we can regain that purpose."

The Spirit of Peace contingent is heading to Standing Rock at the same time clergy from across the country will be converging on the banks of the Missouri River in North Dakota Nov. 2-5, in an answer to a call for interfaith support and solidarity. Four conference ministers from the Northern Plains, South Dakota, Minnesota, and Florida conferences, along with several other clergy from Arizona, Colorado, Massachusetts, Michigan, Minnesota, South Dakota and Vermont will be representing the United Church of Christ in this spiritual witness.

Morrow understands not everyone has the means to make the journey to the Dakotas, but she urges that love for neighbor in a message to other pastors across the denomination.

"Push your churches to engage in charitable acts but to also step into the void that cries for justice. Educate, educate, educate on the issues. Take some risks in preaching. And respond to your neighbors cries. I'm not likely to be able to have the time or resources to travel all over the country to respond to the cries of people, but I will take responsibility for my literal neighbors. I trust that pastors across the country will do the same. I will hold them in my prayers and ask that they hold me/us in theirs."