Small Michigan church quadruples in size by ministering to its community 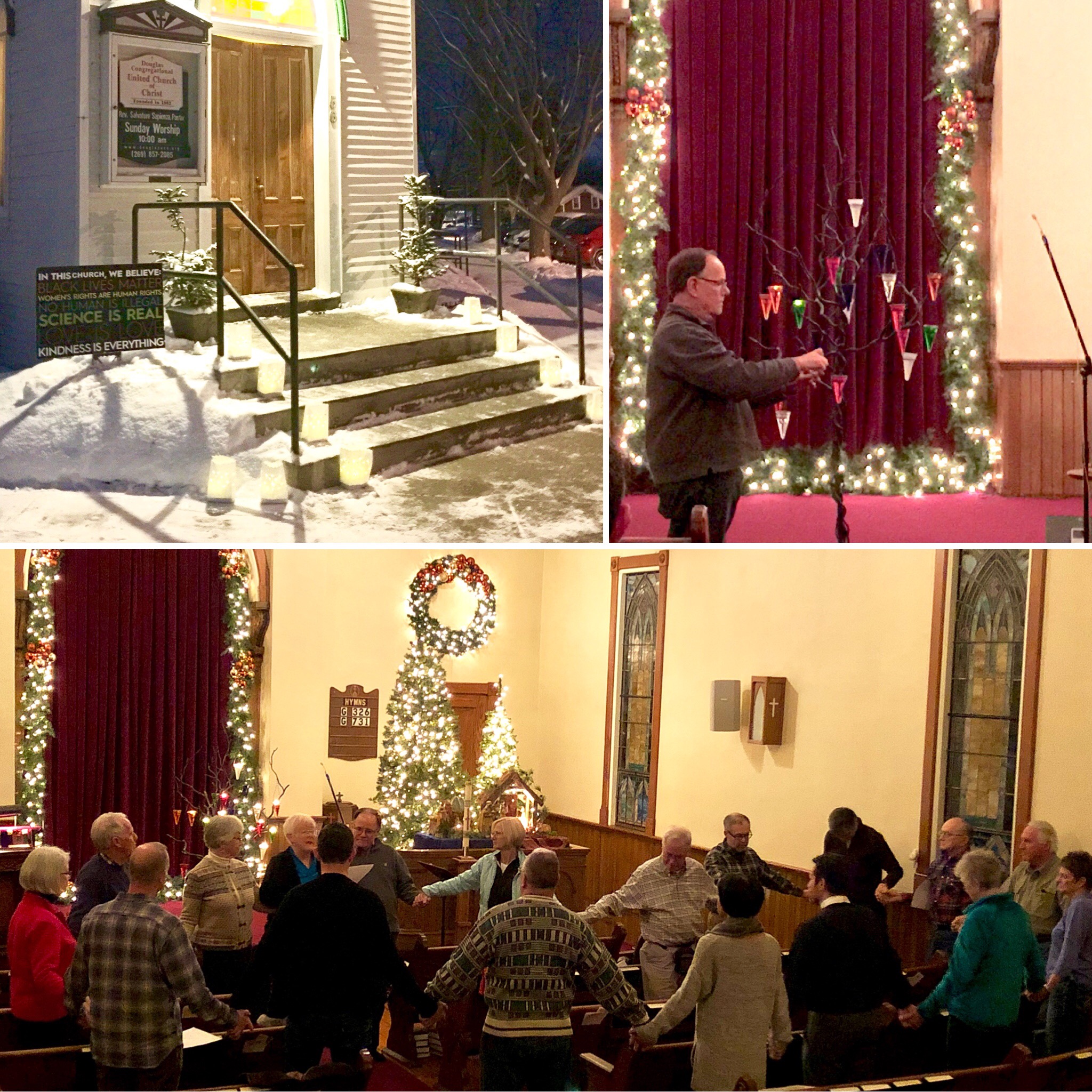 On a cold and snowy Thursday evening, a group of 21 church members in the small village of Douglas, Mich., gathered for prayer, remembrance and call to action on the fifth anniversary of the Sandy Hook Elementary School shooting, in Newtown, Conn.

"We read aloud the words of the mother of a Newtown survivor calling us to move beyond 'thoughts and prayers,'" said the Rev. Sal Sapienza, pastor of Douglas United Church of Christ. "On the way out, everyone was given a card from the Newtown Foundation with a list of links and resources," that point the way, through advocacy, toward positive cultural change.

This service may seem unremarkable, since scores of churches around the country held vigils against gun violence on Dec. 12. What makes this notable is that just a few short years ago, Douglas UCC (DUCC) was fortunate to draw 21 worshippers on Sunday, not to mention a special service in the middle of the week.

Under the leadership and guidance of Sapienza, a former Catholic brother, innkeeper and ordained interfaith minister, that has turned completely around. 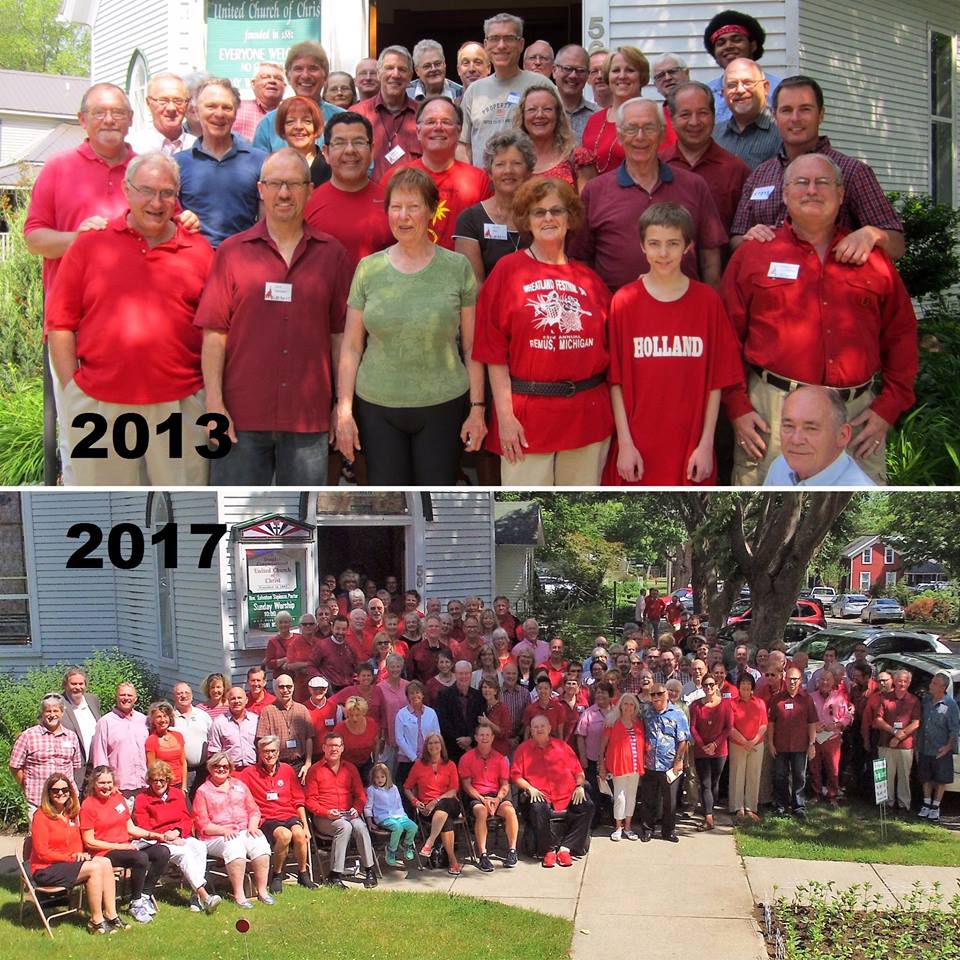 "When Rev. Sal Sapienza arrived in March 2014, the church had 30 in worship, declining membership and was struggling financially," said the Rev. Justo Gonzalez II, of the Michigan Conference UCC. "He brought energy, new ideas and opportunities that the church embraced and took on as their own. This ministry is now one of the fastest growing in the Michigan Conference."

"We have 130 people who come on Sunday, we've more than quadrupled Sunday attendance," said Sapienza. "It's an amazing thing to experience. People are coming — and our church is not that large. Really, it's word of mouth. And it's our visible presence in the community."

A presence that originated with Sapienza, but one that has multiplied exponentially, with the growth of the congregation.

"As we've been growing, people want to take our mission and bring it outside of the church. It's more than Sunday morning," Sapienza said. "We started a Steven Ministry program, partnering with a national organization and thousands of churches. Several members of the congregation have become trained to minister to others in our community. They meet with someone once a week, to sit and listen, be a presence. Others have decided to work with children at the elementary school, becoming volunteers in the school tutoring program. We've become a creation justice church, to care for the environment and have held recycling events and led beach cleanup on the shores of Lake Michigan." 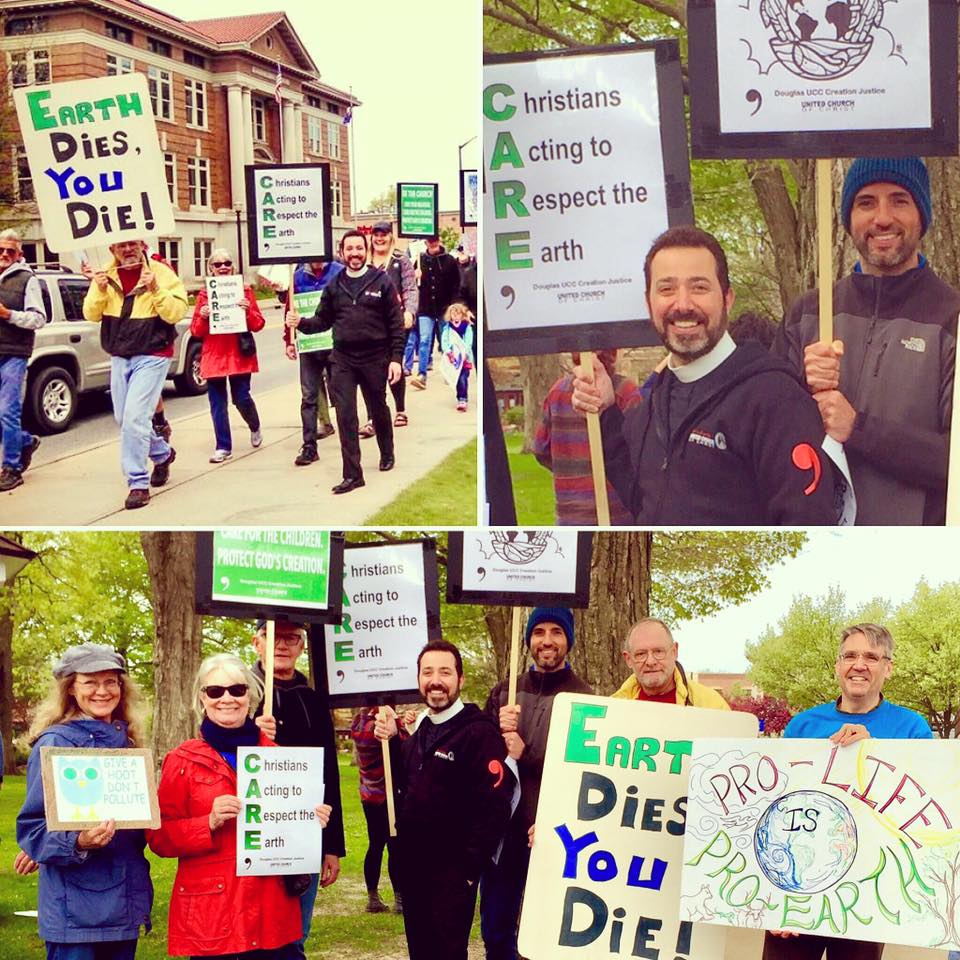 "By dramatically increasing their footprint in the community, they have claimed their prophetic voice and embraced their diversity," said Gonzalez. "This is a story of engagement, vision and revitalization. The congregation has begun to own their ministry and believe in themselves. It’s been exciting to witness firsthand."

"People are now seeing Douglas UCC," Sapienza said. "Our church has been here since 1882, and when I stepped in, I wanted to be a visible presence, so I went to everything."

Sapienza said the local community first got to know him when he filled in for the former Douglas UCC pastor when that minister went on sabbatical. When DUCC wanted to call a new pastor, the congregation went through the UCC search and call process, but that didn't work out. Members asked Sapienza to stay on, and he started learning as much as he could about the denomination, taking History and Polity courses, and receiving Privilege of the Call in the UCC in 2015. And as Sapienza became immersed in the UCC tradition, so did his church.

"As I was learning about the UCC, I was sharing that with the congregation," Sapienza said. "Some folks later told me, 'I have been coming to this church for 20 years, but I didn't feel connected to the UCC until you became our pastor.' This church is now living into its UCC roots with a new mission." 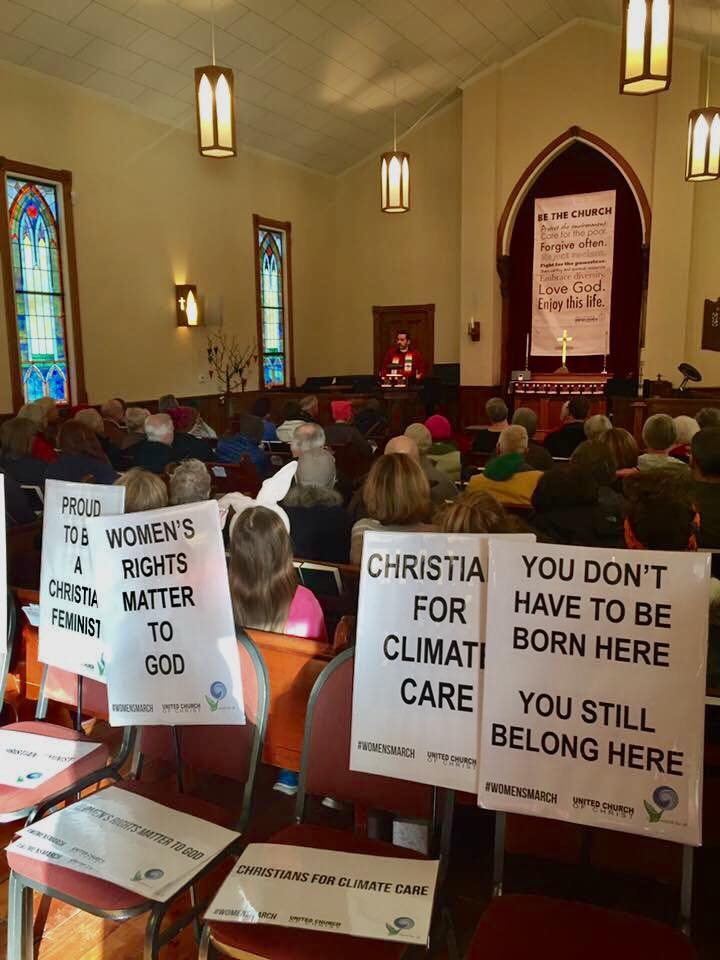 "The first time my wife and I went to Douglas UCC, I noticed the pastor's stole. It had these two goofy things on it that appeared to be number 9s with the holes filled in. So, I asked and found out they are commas, the idea being that UCC'ers believe God is still speaking. As old English major and a copywriter all my life, I was hooked," said Randall Brakksma. "That began what I called 'the great unlearning,' meaning that what I heard in the homilies week after week caused me to unlearn much of the rather conservative understanding I'd received from other churches. I get a new perspective on spirituality at Douglas UCC that is wide open and always making me think. And I like that."

"After moving to Grand Rapids in 2014, I visited various churches, but just wasn't 'feeling it,'" said Debra Carr. "I searched out Pastor Sal and Douglas UCC. It was unique walking in for the first time and experiencing the positive energy of progressive Christianity, with spirituality and a Tibetan bell woven in. Accepting and affirming, it aligned with my other personal beliefs. I knew immediately I had found 'home.'"

Peg Donohue, who moved to Fennville, Mich. three years ago with her husband after they retired, tried out a half dozen churches before she joined DUCC.

"I was born and raised a Catholic, but the church was no longer relevant to me, and I was missing something spiritual in my life," she said. "After four months I decided on Douglas UCC.  It was not a difficult decision. Pastor Sal is a gifted, brilliant and inspirational man and he touched my soul—and continues to every time I attend services."

"I moved to Douglas 2 years ago from Boston. I really wasn't a church-goer but heard wonderful things about Pastor Sal," said Peter Gower. "Once I heard a few of Pastor Sal's sermons, I was hooked. He has an incredible affable gift of talking about the Bible and relating it to our everyday lives." 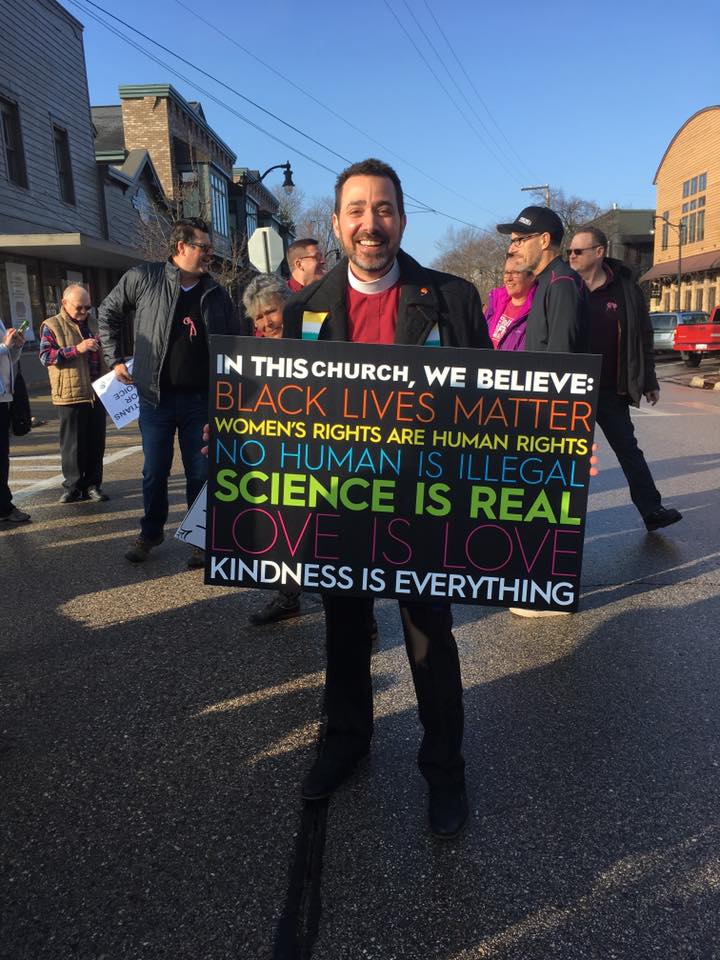 "The majority of people who joined us in the past three years were not church- goers. Here they are seeing a church that made sense to them," Sapienza said. "This is what it means to be Christian, and seeing what the UCC is doing in the world has been important. We have a strong connection with the UCC — that brand if you will. It's an inclusive message that is making sense to them. Gospel stories are resonating with the new members now. Church is becoming meaningful for them."

Because of that, most Sundays at this open and affirming congregation, it's standing room only. There's a live feed into the fellowship hall to minister to the overflow crowd.

"It's been such a wonderful thing. It really is the spirit at work. It's amazing to watch," Sapienza said. "This weekend (Dec. 10) we welcomed 15 new members."

And all of them have completed a new members' class, taught by the pastor. His power point presentation, which documents the history of the UCC, inclusiveness and mission of the denomination, has been well-received.

"A few years ago when I was a member of a Methodist church, I read the book, If the Church Were Christian by Philip Gulley," said Kathleen Mueller. "As I read it, I skeptically thought that no such church existed. Being open and affirming? Welcoming challenging questions instead of mouthing 'correct' answers? Focusing on living like Jesus instead of merely worshipping Him? To me, these were seemingly unattainable theories. After years of church-shopping, my husband and I walked into Douglas UCC and we realized that the Christian church Gulley dreamed of was actually alive and well. We didn't feel welcomed; we felt embraced!"

As Sapienza works with Gonzalez and the Michigan Conference to consider next steps to their space problem, he said that he and his congregation are already helping to plant another UCC church in a nearby community.

"Holland Michigan did not have a UCC church, and we noticed many people were coming to us from Holland," Sapienza said. "Now a young minister in the Christian Reformed Church who was coming to our church has started a UCC congregation there, renting a space right now in an art gallery."

"For the first time in my life, I know what it means to be part of a church 'family,'" Mueller said. "Our congregation is large enough to be active in the community and the world, but small enough to be warm and close. Our passing of the peace isn't a perfunctory handshake, but is a deep and sincere connection with many friends — often with bear hugs! Each week, I leave Douglas UCC truly intent on trying to live fully, love wastefully, and to be the person God created me to be."