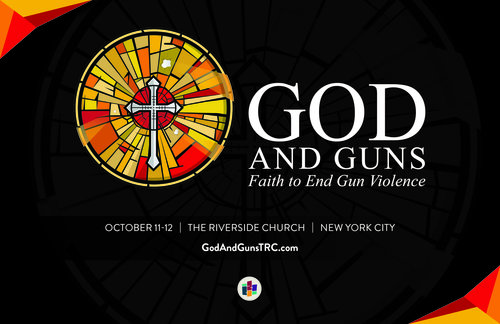 The United Church of Christ has long been an outspoken faith community advocating for sensible, responsible policies to end gun violence. One New York congregation is building on that activism, with an intensive training on gun violence aimed at people of faith and goodwill committed to ending the epidemic.

On October 11-12, the Riverside Church will host 'God and Guns' — a conference that will train attendees — whether clergy, congregants, or community members — how to get started.

"Riverside is grateful for the public witness of the United Church of Christ against gun violence and is proud to be a denominational member," said the Rev. Rachel Johnson, Executive Minister of Communications, The Riverside Church. "God and Guns is designed to amplify the UCC's longstanding prophetic witness on gun violence by addressing the uniquely compelling moral vision and leadership available to faith communities while also providing an array of practical workshops to meet a wide range of needs."

The denomination's public voice goes back to 1995, when the UCC 20th General Synod passed two resolutions, one entitled "Violence in Our Society and World," in which it recognized the complicated and interwoven layers at the root of violence and the other, entitled "Guns and Violence," which invited UCC members and congregations to advocate for legislation to strengthen licensing and registration of gun sales, strengthen regulations of gun dealers and ban semiautomatic assault weapons and high capacity ammunition clips.

The 'God and Guns' October conference will walk participants through three core competencies: the uniquely compelling moral vision and leadership available to faith communities, the combined knowledge base and hard-won lessons of the existing gun violence prevention community, and the skill and expertise of practitioners in social change theory. It will be hands-on training intended to provide leaders with concrete tools for how to go back to their communities and begin addressing the tragic epidemic of gun violence.

"We recognize that the issue of guns and violence can be tricky for a lot of faith communities," Johnson said. "Even mentioning a mass shooting in worship can be controversial for some congregations. Others might be frustrated that their religious community isn't more involved in organizing against gun violence. Attendees of God and Guns do not have to share views on the solutions to the epidemic of gun violence, only a belief that something must be done and a commitment to act in their communities.

Workshops will cover topics such as how to preach about gun violence; how to talk to teenagers and kids about guns; ways to facilitate tough but constructive conversations around guns; the basics of community organizing; and social media practices to amplify your voice.

"We are presenting some of the nation's leading voices in faith organizing, gun violence prevention, and social change theory," Johnson said. "God and Guns will resource best practices from across a diversity of disciplines to help participants discern actions they can take that are appropriate to their communities and context."

Registration details, along with information about presenters and partners, including Shane Claiborne, Pastor Amy Butler, Leymah Gbowee, Pastor Mike McBride, Auburn Theological Seminary, Faith in Action, Everytown for Gun Safety, can be found on the event website or Facebook page.

"The United Church of Christ is proud to support Riverside Church’s effort to end gun violence," said the Rev. John Dorhauer, UCC general minister and president. "Our acceptance of the proliferation of guns, and our desensitization to the violence it inflicts upon us, is not something the Church can remain silent about. We are grateful to Riverside for offering alternative perspectives and narratives intended to curb our irrational tolerance of the growing epidemic of gun violence."