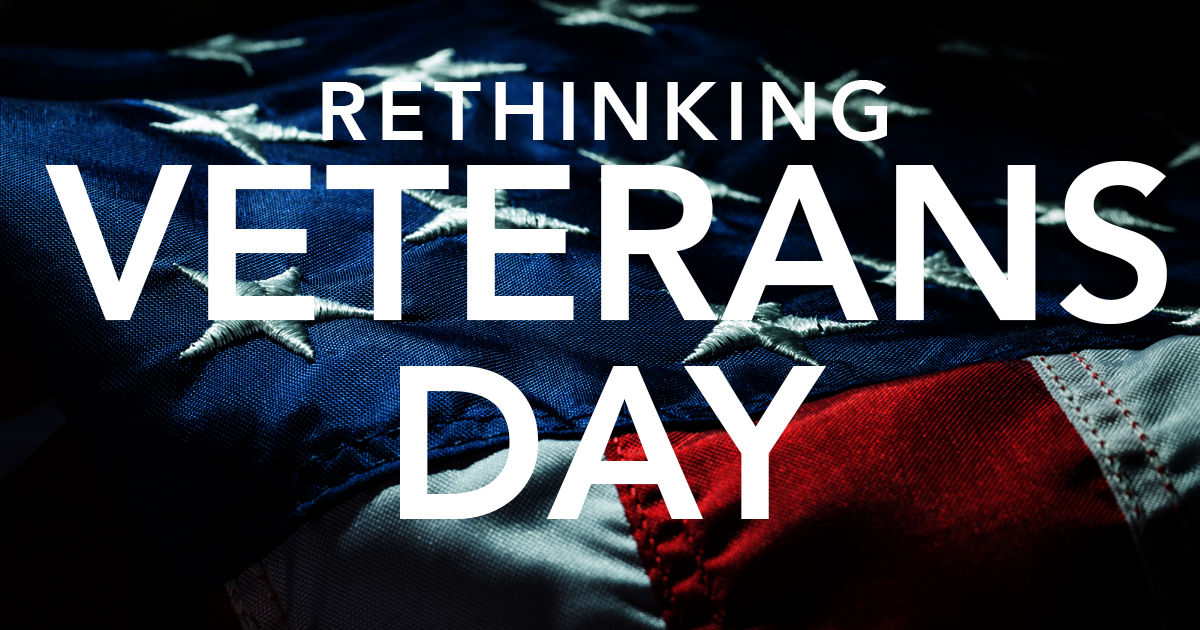 Three ministers with military ties, noting the upcoming Nov. 11 holiday, are encouraging congregations to 'Rethink Veterans Day,' and find ways as a faith community to care for our service members on Veterans Day and every day.

"From my first days as a chaplain with military service members and their families, I recognized that faith communities had an integral role to play in the post-deployment re-entry and re-integration," said the Rev. Zachary Moon, an assistant professor of Practical Theology at Chicago Theological Seminary. "Processing the complex experiences of military service and the impact on families takes time — and our faith communities are uniquely capable of making this journey of transition into the next chapters of life."

That is why Moon partnered with the Rev. Stephen B. Boyd, UCC Minister for Chaplains and Ministers in Specialized Settings to offer a workshop for congregations which want be more effective in welcoming veterans into their communities; to guide a process of healing and wholeness, rather than simply thanking a veteran for their service. Information on the workshops on Nov. 8, in Burlington, Wisc., and Nov. 10 at Chicago Theological Seminary (CTS) can be found here. The CTS workshop can also be accessed via livestream.

"We hope to equip congregations with resources and a way of thinking, doing Veterans Day and Memorial Day differently," said Boyd. "We, as veterans, have so often been a part of those worship services where they ask the veterans to stand, maybe sing a patriotic hymn and then go on to the business of Sunday worship. We are working to create a whole worship service that celebrates veterans and attempts to show how issues can be spoken to directly, addressing the real men and women who have served."

"Congregations can support their 'sons and daughters' with prayer, letters, in addition to offering a special liturgy on days like Veteran's Day, Memorial Day," said the Rev. John Schluep, a UCC minister, former Army Captain, and founder of Warriors' Journey Home, an organization dedicated to helping veterans and their families adjust to life for the returning service member.

A retired pastor of First Congregational Church of Tallmadge, Ohio, Schluep said it is important to focus on "a supportive embrace of the service person," not nationalism or patriotism. "We disagree with the conflict, but support those who have served in it, in a good way."

Military service can mean a lot of different things to each individual, Schluep noted, so the ability to listen, without judgement, is also critical.

"Provide a time for veterans to tell their story and listen without judgment, comment, criticism, or endorsement," Schluep said.  "The Warriors' Journey Home mantra is 'Listen — Speak — Heal.' Listen with an open heart. The church needs to find a way to deal with the moral injury of war with our members. A lot of people have done things that aren't very nice. There has to be opportunities for forgiveness, for reconciliation."

"Many churches sincerely wish to do more effective ministry with veterans and military families, but very few have invested in the relational work to make that happen," Moon said. "The most effective congregational works are service oriented projects. Folks in the military care about service and so do most churches I know. If we can see veterans for the leadership and other strengths, rather than as charity-cases, and build on the shared value of service, we can get the whole congregation including veterans serving the community. The journey into the next chapters of life after military service is much better if veterans experience being a part of a team, doing something worth doing, and building trust with others along the way."

"It takes pastoral leadership," Schluep said. "I work with a lot of vets and they feel a disconnect from the churches they grew up in. I think churches need to recognize both the veterans in their midst, and the people of strong heart, the families of the vet, because they deal with those burdens as well."

"One of the main challenges is the veterans feeling safe in going into churches," Boyd said. "This is also the challenge of churches attempting to create a safe place for veterans to be welcomed. I know that more churches would like to support veterans and have programs available, but for most it is a question of where to start.

"Zachary has written a book, Coming Home, Ministry That Matters With Veterans And Military Families, which is a great Bible study for congregations thinking about intentionally doing program around this issue," Boyd continued. "I will be leading a study of the book in my local church after the first of the year. It is a great resource, a very good starting point."

Veterans Day originated as "Armistice Day" on Nov. 11, 1919, the first anniversary of the end of World War I. Congress passed a resolution in 1926 for an annual observance, and Nov. 11 became a national holiday beginning in 1938. In 1954, after lobbying efforts by veterans' service organizations, the 83rd U.S. Congress amended the 1938 act that had made Armistice Day a holiday, striking the word "Armistice" in favor of "Veterans."